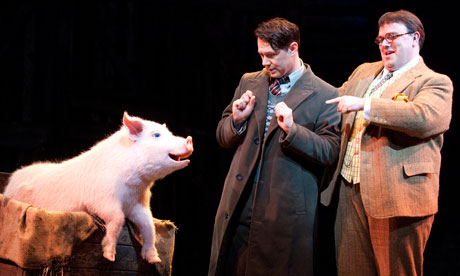 Cameron Mackintosh must be a confident man. Exit the theatre after a performance of his latest production, Betty Blue Eyes, and you’re accosted by the front-of-house staff trying to flog you tie-in merchandise. Red t-shirts bearing that suddenly ubiquitous wartime slogan ‘Keep calm and carry on’ amended to spell out quotes from the show. ‘Sexual intercourse will be in order’ and something I didn’t quite make out about pork. Surely it took years for the likes of Cats and Phantom to build up that kind of cultural capital. Betty Blue Eyes is only just out of previews.

It’s all a bit redolent of the way the show itself feels like a marketing exercise. An adaptation of the 1980s Alan Bennett-scripted film A Private Function, it concerns the efforts of Yorkshire townsfolk to overcome the privations of austerity Britain in order to celebrate the upcoming royal wedding. ‘Sound familiar?’ the posters ask, somewhat archly. Well, yes.

The adaptation was probably in train before William and Kate announced their engagement, but it’s hard to shake the feeling that the producers spied an opportunity to grab themselves a bit of the zeitgeist. The cast of the original reads like a who’s who of national institutions – Maggie Smith, Michael Palin, Denholm Elliott, Richard Griffiths, Liz Smith, Alison Steadman – but for all that it’s pretty minor fare. It certainly hasn’t made the popular culture crossover that other recent screen-to-stage transfers have. Think of Dirty Dancing, Mary Poppins, even Billy Elliot, and you’d hardly put A Private Function alongside them in terms of their place in the collective consciousness.

Filmed in 1984, it’s set in 1947 in an England worn down by war and rationing, waiting for the welfare state. It tells the story of Gilbert and Joyce Chilvers (Palin and Maggie Smith), the town chiropodist and his socially ambitious wife, who, frustrated at being constantly ostracised by the town elite, get their revenge by stealing a pig. Not just any pig. Betty is being illegally fattened up in time to grace the tables of the eponymous private function: an exclusive dinner to celebrate the wedding of Princess Elizabeth to Prince Philip.

I’d seen the film a couple of times in my late teens, when I was in my Alan Bennett fangirl phase. Rewatching it now, it would be a stretch to call it an over-looked classic. Much of it feels derivative: two parts Ealing comedy (Bill Paterson’s uptight, sensorially challenged man from the ministry is straight out of Passport to Pimlico) to one part All Creatures Great and Small. But there is something refreshingly unsentimental about its treatment of post-war deprivation and small-town life. The town elders are quickly exposed as the worst kind of snobs and hypocrites and the government’s ‘we’re-all-in-this-together’ rhetoric is merely a flimsy covering for a thriving black market in which the rich and well-connected enjoy the fat of the land. While the town’s doctor, lawyer and accountant dine on steak and handmade chocolates, the Chilvers have to make do with spam.

Surprisingly for an Alan Bennett film (I always think of him as such a squeamish prig) there’s a great deal of focus on the physicality of flesh, in both its (dead) animal and (live) human forms. Greasy, bloody stains sully the bedsheets where an illegally stashed side of bacon has been concealed, toenail clippings drop onto a half-eaten bon bon, Pete Postlethwaite’s town butcher sizes up the naked bottom of his mistress as if it were prime fillet, and later the camera lingers a little too long on the stringy tendons left after he has ripped the feet off a chicken.

These are details the stage show cannot hope to replicate. Most of the subtlety and social commentary is junked to be replaced with nostalgia and sentiment. In the film we are told little of Gilbert and Joyce’s pre-marital history. On stage, the circumstances of their meeting is the subject of an entire flashback sequence as ARP warden Gilbert rescues Joyce from a bombed-out dancehall. This provides an opportunity for a very enjoyable and well-choreographed jitterbugging sequence followed by a brilliantly staged coup de theatre, the bombing itself (Mackintosh the showman at his best). But something is lost as well. It suggests Gilbert and Joyce are still relative newly-weds, not the middle-aged couple with a good decade or more of marriage behind them that they clearly are in the film.

And in the film, Gilbert’s female clients are openly disdainful of the little man who comes to do their pedicures, while in the show they see a gentleness that helps them cope with the grief of lost husbands and sons. Oh yes, and the stage Gilbert goes without payment from his clients. He just wants their rationing coupons so he can send them to the palace as a contribution to the princess’s wedding breakfast. Yuck.

It’s worth noting that the film’s one war ‘widow’, Mrs Forbes (husband missing in action) exploits the respectability her semi-widowhood confers on her to entertain lovers and barter secrets and sexual favours. Funny how much more respectful of the legacy of World War Two we’ve become over the last 25 years.

There’s no starker illustration of the way the show pulls its punches than the fate of Betty herself. The film invests no emotion in her death. Slaughtered off-screen, her final journey to the butcher’s shop is briefly glimpsed in the background as Joyce Chilvers exchanges conversational niceties with Dr Swabey (Denholm Elliott, giving the film’s best and funniest performance). Mackintosh supposes his West End audience to be too sentimental to see an animatronic pig suffer the same fate. When she’s reprieved, the sense of relief in the audience is almost palpable. And she even joins in the finale, her voice provided (weirdly) by Kylie Minogue.

Rather than cashing in on the popularity of a much-loved film as other screen-to-stage transfers have done, Betty Blue Eyes is more a re-interpretation of the source material. The change of title is telling: the original could be dispensed with as it means nothing, but the plot and setting usefully chime with the current 1940s nostalgia boom.

How it will do in the West End remains to be seen. The songs are serviceable rather than standout, but the casting is canny, particularly Psychoville stalwarts Reece Shearsmith, Adrian Scarborough and David Bamber. This will have to change, of course, if the show is set for a long run.

Memories of this year’s Royal Wedding are already fading, and if the economy picks up strongly (a fairly big if, I concede) demand for those Keep Calm and Carry On fridge magnets may slacken off. I think Sir Cameron may have been a little premature with the red t-shirts.

Betty Blue Eyes is playing at the Novello Theatre in London, and the official website is here.