Flight! The dream of man from when Daedalus first made wings for his son without first performing a full risk assessment.

Despite the enduring appeal of these dreams, why is it that the once dominant genre of combat flight simulations now survives only because of obsessive Russians willing to work for peanuts?

It used to be different. Back in the 80s and early 90s, companies (all now taken over or long since bankrupt) like Microprose, Spectrum Holobyte, Rowan, Dynamix were major players in the fledgling computer games business, giving Commodore 64, PC (and later Amiga and Atari ST) owners the chance to fly their very own Spitfire or F-16 against the might of the Luftwaffe or the Red Army Air Force. They challenged the technology of the time to its limits, and drove upgrade mania. Assessing them from today’s perspective, they look markedly crude, but at the time, no other games offered graphics as apparently real. Seeing the number of polygons on plane models increase year by year was enthralling at the time; it’s only in retrospect that they all seem equally primitive.

But, why is it that this genre is now moribund?  The two big releases this year, and really, the only significant releases in the last three years or so, have been both Russian: A-10C Thunderbolt and Cliffs of Dover. The former of which is a simulation so absurdly detailed that every switch in the cockpit works. All several hundred of them. Including the windscreen washer*. Cliffs of Dover is notoriously bugged, completely lacking in atmosphere, and brings even the most powerful PCs to a crawl. (To be fair, I’m told recent patches have fixed the technical probems.)

So why did the genre die?

Killed by its turbofans 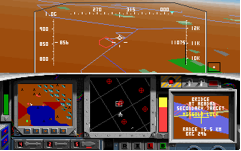 This is F15 Strike Eagle II, from 1989. When it was converted to the Amiga, it became the top selling game on the format in 1991. Crude, not very realistic, but it felt like flying should feel to a 12-year old boy.

But seven years later, look at how Jane’s F-15 simulated the cockpit of the same plane.

Jesus. I have no idea what any of that means. I think that’s a map at the bottom. Don’t ask me about the rest. 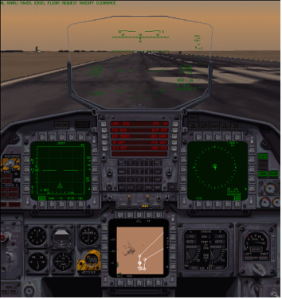 True, modern jet fighters are fearsomely complicated, but this is what the most vocal fans wanted. They wanted it more real, and that’s what they got. Turned out, not many other people did.

There’s a word bandied about a certain class of enthusiast – ‘rivet counter’. The type of person who will, on the internet, claim that a flight sim is ruined by the cockpit in the Me-262 being painted the wrong shade of blue. I am not joking. But sometimes adherence to realism makes flight sims more difficult – if not actually more dangerous – than the real thing. A practical example: single-engined propellor planes typically have a tendency to slowly turn themselves rather than fly in a straight line. This is because a spinning propellor is basically a giant gyroscope. In a real plane, pilots can fairly easily compensate: they keep their foot on the rudder bar (kind of like keeping a car’s clutch at biting point), which is physically tiring, but not something that requires much skill. If this rudderwork is modelled in a virtual space, and translated even to a specialist joystick, it involves twisting the main stick at a small and precise angle while also trying to climb, dive and turn. This is fiddly at best and almost impossibly complex if other actions are involved. 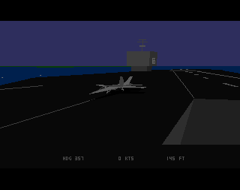 F-18 Interceptor from 1988. Fly around the Bay area! Try to get under the Golden Gate bridge. Sink a sub! 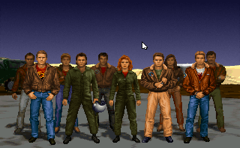 Flight Commander from 1993. Play a hardbitten mercenary pilot in the dystopian grimdark future of 2011, alongside your sparky squadron mates, fleshed out between varied and interesting missions. 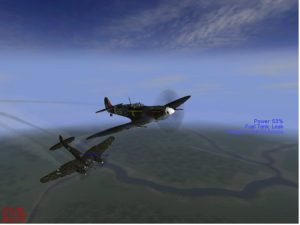 Il-2 Sturmovik from 2001. Pretty, even today, and you can fly just about any plane in WW2. However, as a game, it consists of dull, randomly generated campaigns where four planes fly across an empty map to fight another four planes. Popular in multiplayer to this day, though, where the complete lack of atmosphere in the game doesn’t matter so much, as the players have created their own extra-game structure; virtual squadrons, campaigns, etc. Their own stories make up for the lack of atmosphere in the game itself – sadly, this is a necessarily exclusionary atmosphere – if you’re in, it’s great, if you’re outside, it’s like that bit in Red Dwarf where Rimmer excitedly describes his best ever game of Risk.

Flight sims didn’t get small, the market got big.

The original market for home computers, as opposed to consoles, was the, shall we say, more technically enthusiastic members of society. You know who I mean. Your Uncle Keith, with the kit car in his garage that he spent every weekend tinkering on, a long-suffering wife, and one too many faux-leather-bound part works about the Waffen SS on his shelves. These were the people who bought themselves a computer in the 80s ‘to help with their accounts’ and found themselves too old to buy Horace Goes Skiing with a straight face. The flight sim, with its apparent seriousness, and the big glossy manuals, were an ideal fit for them. The thing is, there’s not that many Uncle Keiths out there, and they’re a fairly small market in the whole of society.

In 1990, the global video games market was $4.7bn. Today, it’s almost precisely ten times as big at $47bn.  Game development costs have shot up even faster – if you look at the credits from a game even a decade or so ago, and compare to one today, you can see why. So while back then it was possible to sell, say, 100,000 copies and make a profit, these days you need to sell at least a million to stand a chance of recouping your costs. The problem is that the Uncle Keith market hasn’t grown by that much, most of them were in from the start, and there’s not much scope for expansion.

That most flight sims of recent years have been developed in Russia and Eastern Europe really brings to life the brutal economics behind this.

Every day, approximately a thousand US veterans of World War II die. Simple old age is killing soldiers at three times the rate that the war itself did. My daughter, born just five months ago, has no living relatives who served in the War, and, at most, two or three who were even alive at the time. There’s an interesting book by Dan Toman, The Great War: Myth and Memory, which looks at how the modern narrative of World War One as a pointless and futile waste of effort only became dominant once the men who fought it – who had a wide range of views – began to die off in large numbers in the 60s and 70s. We’re currently going through the same process with World War II, I think, but in reverse. The story of the Good War fought for Right was established early on, and it’s only now that the narrative is slipping out the hands of those who knew wie es eigentlich gewesen,  and intriguingly bifurcating into the cartoonish ultraviolent power fantasies of the Call of Duty series. Meanwhile more serious histories throw ever greater emphasis on the inconvenient facts coughed away in the post-War euphoria and Cold War exigencies (e.g. the British bombing campaign; the diplomatic silence about civilian atrocities committed by German armed forces that was needed to rehabilitate West Germany in the early 50s; the truly enormous cost in blood and soil paid by the USSR, etc.).

Even the Cold War is slipping into the past. Today, it’s hard to recall quite how much it impinged on everybody’s lives. Even setting aside the nuclear paranoia, my wife wouldn’t exist if a mid-Western American and a Scottish telecommunications engineer hadn’t met on a USAF airbase in Turkey, nor would my dad have made it from a terraced house in Workington to middle-class comfort had it not been for the funds pumped into scientific research.  Growing up in rural Oxfordshire in the 80s, I remember seeing the Chinooks regularly flying over my head, the air raid siren tests, and no matter how vaguely, the regularity of news articles about the latest military advance from the USSR threatened our security.

Now, although we’ve been at war for, what – almost ten years now? – it’s far away, and our phenomenally expensive  airplanes are more or less acting as bomb trucks, flinging high-explosive down on a barely-seen enemy unable to strike back. The air of chivalric romance, no matter how dubious it was right from the start**, is gone. Military pilots are no longer knights of the sky, but have a job that’s now, in essence, not much different from working for Ryanair.

What does this means for flight sims, though? Face it, the boys in blue just aren’t sexy to the kids anymore. The dream is, if not dead, limping back home on one engine.

Is there a future?

In the darker corners of the internet (OK, not those dark corners; more like the dark corner in the student bar where the engineering students quoted Monty Python to each other), you can still find the last hangouts of the flight sim community.  They don’t care about the above. So long as they can play multi-player in their virtual Jagdstaffeln*** with each other on the same-old flight sims now coming up to a decade old, they’re happy. And good for them, frankly. It’s a niche, they’re happy in it, but like model railways, it’s a static one.

Some genres have been able to cope with being a niche – wargames, for example, remain surprisingly active. (Look at http://www.matrixgames.com, as an example). On the other hand, look at a screenshot or two – they’re the last hangout of the one-man developer for a good reason.

Mobile gaming? Although there is a surprisingly hardcore flight sim on the iPhone (XPlane), flight sims tend to require time commitment: the ‘pick up and play for five minutes on the tube’ model doesn’t really work.

In short, they were of their time, and we should note their passing with a degree of nostalgic regret, but I fear them days aren’t coming back again. Just like my hair.

* The sim’s first patch included the following note: “Master Caution will not active [sic] when starting an engine.” It turns out they had modelled wind effect, and then simulated this driving the turbines of the engines. The separately modelled error detection system was then identifying turbines rotating without the engine on, and therefore switching on the general error light in the cockpit”

** The Germans have always called fighter planes Jäger, or hunters, which nicely captures the essence of what successful fighter combat has always involved: stalking unsuspecting enemies before blasting them out of the sky before they have a chance to fight back. And let’s not forget that the RAF spent most of the 20s and 30s bombing Iraqi and Pashtun villages.

*** To answer the question you might be wondering at this point. Yes, there does seem to be a general tendency in their politics. Anyone familiar with Futurism might be able to guess what this tinge is.

7 thoughts on “Air Con: The Death of Flight Sims”