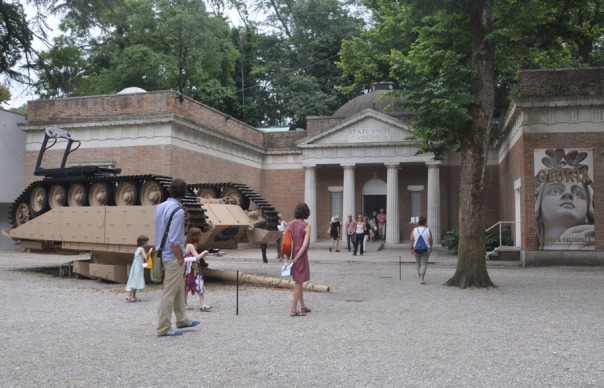 Venice isn’t like anywhere else. I realise this might seem like an extreme example of stating the obvious but I’m not referring to the the architecture or the canals or the all-pervasive air of unreality that always makes me wander round exclaiming ‘I can’t believe this is really here’ incessantly for the first couple of days until gradually familiarity with the actual place edges out familiarity with previously seen photographs and the picture of Venice I carry in my head. No. In an international art world increasingly driven by biennials, Venice isn’t like anywhere else.

So, what makes La Biennale different?

Though the Biennale takes place in spaces across the Venice, there are two significant concentrations of activity: firstly, the Giardini Publici, dominated by national pavilions with a relatively small area given over to the curated exhibition, and secondly the Arsenale, where the curated exhibition is the major feature, but which is also home to the Italian pavilion and the national presentations for a handful of other countries. Countries without a pavilion in the Giardini or a space at the Arsenale occupy buildings elsewhere, often showing in the sort of spaces not normally associated with contemporary art. And across the city there are official collateral events as well as other exhibitions not attached to the Biennale but capitalising on its presence.

The first Biennale was held in the newly completed Palazzo dell’Esposizione  in the Giardini in 1895; the current one is the 54th (there have been gaps during wars and there was a switch from even to odd numbered years in the early 1990s). The first national pavilion – the Belgian one – was completed in 1907 and was quickly followed by pavilions for Britain, Germany and Hungary (all 1909), France (1912) and Russia (1914). There are now 28 pavilions within the Giardini operated by 30 owner nations (the Nordic pavilion is jointly owned by Sweden, Norway and Finland, with what was intended as a temporary pavilion designed by Alvar Aalto for use while the permanent space was built still in use over five decades later, and the Czech Republic and Slovakia share what was built as the Czechoslovakian pavilion) in a space that tells us much about twentieth century history in terms of both architecture and politics. Overall, the number of national participations far exceeds this with other nations using spaces elsewhere, either at the Arsenale or across the city. This year there are 89 national participations including a number of first time visitors such as India, Saudi Arabia and Zimbabwe – funded in part by the British Council – and the return of Iraq, which last exhibited here in 1976 And the whole thing lasts for nearly six months.

As if all that wasn’t enough, la Biennale di Venezia is not just the Biennale Arte. In even number years there is an architecture biennale and the Venice International Film Festival, held annually in late summer, also falls under the umbrella of the Biennale along with festivals of dance, theatre and contemporary music.

To those who visit Venice specifically to go to the Biennale, its occupation of the city seems almost all-encompassing – the week I am able to spend there is barely time to scratch the surface and I leave all too aware that I have missed much more than I have seen – but I suspect those without an interest in contemporary art could easily spend time in the city without registering the presence of the Biennale beyond the maps and banners hanging outside exhibition spaces. La Biennale inhabits the city comfortably but without dominating it, or at any rate without distracting attention from its unique charms.

All of which means that several hundred words in I’ve yet to really decide whether this is about the art, the architecture or the politics of the thing. Where to begin?

By way of a quick summary, I managed to visit most of the official exhibition – ILLUMInazioni, curated by Bice Curiger – as well as 28 of the 89 national participations and 9 of the 37 official collateral events (the latter figure only tells part of the story though, with several of those 37 exhibitions running across multiple sites). Thus, any attempt to review the Biennale as a whole would inevitably be partial, largely determined by the geography of the thing and my own focus on the two main sites at the expense of missing most of the rest. Those limitations notwithstanding, I did see an awful lot of art. Inevitably, some of it was very, very good and some of it really wasn’t. Less inevitably, some of it was barely visible – Anish Kapoor, I’m looking at you.

My visit started with a day at the Giardini. The work I was most looking forward to here – Mike Nelson’s installation in the British Pavilion and Christian Boltanski’s in the French – didn’t disappoint; indeed in the main the work I saw in the Giardini was good if often rather safe and, though there’s a lot to see, a day spent wandering through a public gardens can never really count as hard work. There were low points though, two in particular in pavilions I greatly enjoyed last time. One of my strongest memories of Venice in 2009 is Mark Lewis’s film in the Canadian pavilion so the dullness of this year’s offering – paintings by Steven Shearer – was a disappointment. And the work of Jennifer Allora and Guillermo Calzadilla for the US pavilion seemed rather trite, placing style before substance. Track and Field, a running machine on an upturned tank, outside the entrance, put me off the show before I get through the door, loudly announcing ‘look, over here, we’re the Americans’. Algorithm, a functioning ATM built into a pipe organ which plays when a card is inserted is amusing enough – and useful in that I needed cash – but nothing more. Having liked the simplicity of Allora and Calzadilla’s Revolving Door in 11 Rooms at Manchester International Festival, for me their show here was an ostentatious disappointment, though in fairness I didn’t see the aeroplane seat sculptures in use as sites for gymnastic performances. Without the tank I might have been better disposed to the work on show but ultimately this feels like work that knows there are questions to address about patriotism and America’s place in the world and feels that this could well be the place to do it but prefers to offer surface glitz.

Quite the opposite is true of the German pavilion: Liam Gillick’s 2009 installation – kitchen units topped off by an animatronic cat spouting pretentiousness – has stayed with me for all the wrong reasons but Christoph Schlingensief’s work this year really held my attention although given that the installation is accompanied by a day long programme of screenings I manage to see only a tiny portion of it, an inevitable problem with showing durational works in a context like this. In the main part of the space the stage set from Schlingensief’s 2008 Fluxus Oratorio A Church of Fear vs. the Alien Within has been installed, turning the space into a dimly lit church in which different elements of Schlingensief’s work are brought together, along with the music of Wagner and works by Joseph Beuys and Fluxus artists. The work is a kind of portrait of the artist’s own illness; Schlingensief died of lung cancer last year. Though there is a somewhat oppressive air,  this is nonetheless a fascinating space to walk around and it’s interesting to watch the way others interact with the work. And of course, not to be underestimated at the Biennale, it offers the welcome chance of a little sit down.

In the British pavilion, Mike Nelson’s I, IMPOSTOR is a typically complex and engrossing immersive installation recreating and adding to an installation he made in Istanbul for that city’s biennial in 2003, exploring in part the trade routes between the two cities and taking as its inspiration Orhan Pamuk’s novel The White Castle. In the bustle of the Biennale it’s hard to get the sense of disorientation that one gets alone in a Nelson installation, nonetheless this work entrances me. The building becomes a labyrinth in which stories are suggested and contradicted. It becomes hard to determine even such basic things as the era of the space we inhabit: the tools apparently abandoned in the dusty rooms seem almost pre-industrial, though this reading is contradicted by the electric lighting and upturned Coca Cola crate; then one suddenly encounters a photographic darkroom bathed in the red glow of a safelight used for black and white printing. And, as in other installations such as The Coral Reef, Nelson adds to the visitor’s confusion by replicating a space. The most unexpected turn here though is the one that leads to a ramshackle courtyard complete with satellite dishes in the middle of the pavilion; suddenly finding oneself in the open air in the middle of a very solid building is a strange sensation.

France is represented here by Christian Boltanski at his best. His exhibition Chance features four connected works. In The Wheel of Fortune, in the central space, a print stream of babies’ faces passes though complex metal scaffold, seemingly continuously generating more and more people and raising questions in my mind about both overpopulation and the accident of each individual birth. Periodically a bell rings and the strip stops, a baby’s face appears on the monitor, chosen by chance. In the side spaces digital counters – The Births and The Deaths, two parts of the work Last News from Humans – tick over continuously; 200,000 more people are born each day than die. Be New, in the back space, is a projection of a constantly changing composite face; visitors can press a button to freeze the changing mismatched face on the screen. If chance works in your favour and the three segments on the face match, you win the work. The odds of this happening are remote but the mismatched faces in which children and adults are mixed are reason enough to keep pressing the button.

Time slips away far too quickly in Venice – as, I suppose, it always does on holiday – and in the curated show at the Arsenale the two works I struggle to tear myself away from both address the inevitability of time passing. Christian Marclay’s The Clock, which I have written about here before holds me once again in the comfort of one of its sofas for longer than I can really spare. Unlike the queue to see the James Turrell installation, this is time I don’t resent. Urs Fischer’s Untitled features a life size replica of Giambologna’s The Rape of the Sabine Women watched by an everyman figure, but here the 16th Century sculpture and 21st century man are remade as candles, gradually melting away as the Biennale progresses. Though it speaks of history and the passage of time this is work for the present; it references the past but has no future, it will melt away.

Biennale Arte continues at sites across Venice until 27 November 2011.