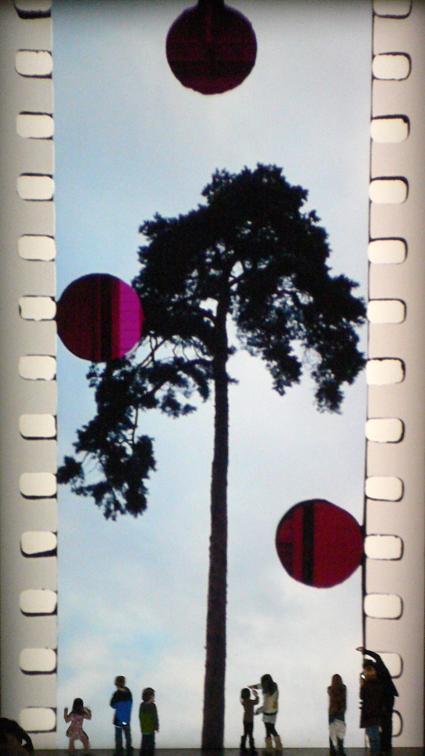 Tate Modern’s Turbine Hall is a difficult space for film – or indeed for any art, though clearly industrial scale sculpture has a head start – although, like many, I’d quite like to see Christian Marclay’s regulation carpet and sofas installed for an extended showing of The Clock; all weekend every weekend for six months or so perhaps. And, for me at least, Tacita Dean is an artist whose work has always seemed to work best in more modest spaces where the audience can give the work undivided attention away from the distractions of this most bustling of gallery spaces. Though the space demands a level of spectacle Dean has never seemed to aspire to, the Turbine Hall Unilever commission is not something to shy away from and being the first to bring film to the space at least allows Dean to work on her own terms. Or it might have done if the subject matter of her piece hadn’t forcefully imposed itself upon her in the form of the demise of Soho Film Laboratory, the last 16mm film lab in Britain. This then is a eulogy to a medium threatened with imminent extinction, a medium that defines Dean’s career.

For me, Tacita Dean’s work is at its best when it offers a narrative arc – even, or maybe especially, one as predictably uneventful as a field of cows having a little lie down during a total eclipse before standing up again to go about their cud-chewing business when the sun re-emerges – or the meditative repetition of the beam from a lighthouse looking out to sea. These are gentle works that quietly get under my skin and keep me watching to the end. Even when there is essentially no story to tell, Dean tells it beautifully and compellingly. That she works with film not video – with analogue not digital – has always seemed to me to be part of what makes Dean’s work as slowly deliberate as it is; every detail is considered and precise, the work exhibits a visual simplicity that leaves space for reverie. That it is also more beautiful to look at as a result seems like a bonus rather than the point.

In recent months – first in response to the closure of Soho Film and more recently in the context of the opening of her Turbine Hall show – Dean has spoken a good deal about the stuff of film and its importance to her practice in much the same way as Gerhard Richter – whose painting is currently the subject of a major retrospective at Tate Modern – might talk about paint. Dean has talked about FILM in terms of manipulating the material of film and the way it behaves and of using the tricks of early cinema to make effects in many ways similar to those we now take for granted with digital. And, for me, therein lies the problem. 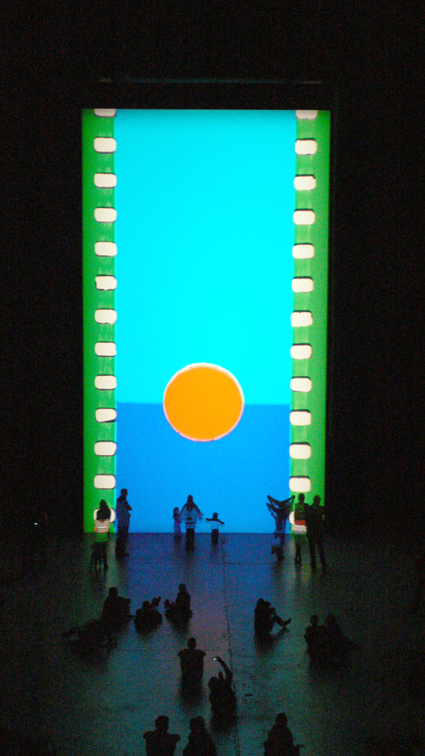 FILM is a complex piece, fitting visual trickery, references to both art and cinema and to the space in which it’s screened (the Turbine Hall is both the cinema in which the film is shown and the location in which much of it appears to be set)  into its eleven minutes. Aesthetically it veers from the stark monochromatic angularity of an empty escalator to the multi-coloured grid of Mondrian on acid. The imagery references the architecture of the Turbine Hall directly but also harks back to Olafur Eliasson’s Weather Project – one of the most popular works to occupy the space – and the Paramount Pictures mountain. At one point, circular blobs appear on the image reminding me of both the odd scratches that can interrupt overused cinema prints and the circles of colour that block sections of John Baldessari paintings. These become apertures through which another image is visible.

The visual tricks achieved, without manipulation in post-production or presentation (barring the use of a CinemaScope lens to stretch the projected image), by double exposure, masking and hand-colouring are well executed – and in fairness to Dean they do carry traces of analogue in their slight imperfections – but they reference the kind of manipulation that is commonplace in the age of digital. The piece is projected from a booth that denies us the chance to see the projector or hear it whirr; the ambient sound of film is lost. In interviews to mark the work’s opening, Dean talked about the problems caused by inexpert cutting and the eleventh hour rescue of the work by Steve Farman of Professional Film Cutting who drove across Europe first to re-cut the film to eliminate the white flashes that would have punctuated it and then back again to deliver the final cut to Tate in time. Is hanging onto the materials and technologies of the past really just about an artist’s relationship with her materials and processes and the aesthetic choices they offer, as Dean’s assertions that she is neither a Luddite nor ‘fetishising the medium’ suggest, or is it something more? The drama of the production process adds to the narrative around the work – which seems appropriate for Tacita Dean – but in doing so it draws attention to the awkwardness and unpredictability of working with what is fast becoming obsolete technology and opens up suggestions of quaintness. Though intended as a ‘call to arms’, the book that accompanies the work reinforces this for me, offering a lament for film from artists, curators and writers; though finding a strip of film nestling among its pages offers a pleasing reminder of what the whole thing is about.

My first visit to FILM was brief – I saw the whole eleven minutes of the piece but with at most half a minute of duplication – and took place at the end of a day in which I’d already seen a lot of art. The space was largely empty, with probably fewer than a dozen viewers in total. I watched the work intently, having always liked Dean’s work, and having crossed town to get there that day rather than waiting another week, but I was underwhelmed. A bit bored, even. The effects seemed needlessly tricksy and the sprocket holes, running down the edges of the screen throughout, a laboured cliché given their evident artifice: showing the means of production is one thing, layering a facsimile of it onto the frame itself is quite another. Aesthetically, the work undoubtedly has its moments – quite apart from the imagery on screen, the vertical format and the stretched ratio of CinemaScope are stunning – but they just weren’t enough; I wasn’t entranced in the way that I have been by simpler works such as Banewl and Foley Artist. 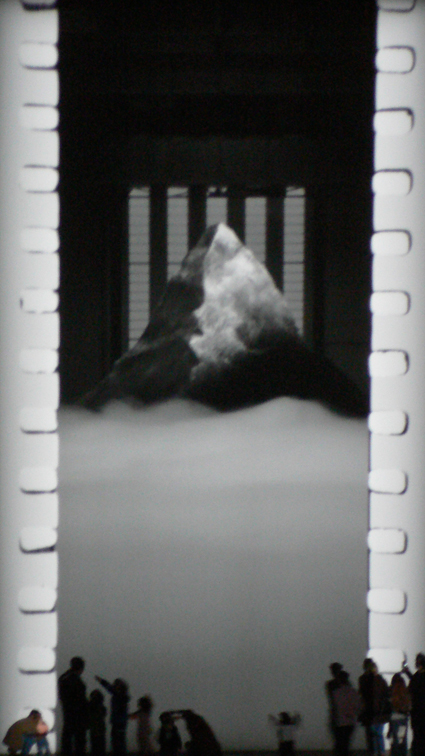 Returning to Tate Modern a week later, I spent more time with FILM. This time it was late on a weekend afternoon and the Turbine Hall was busier. Children played with their own shadows in front of the screen. Scores of people lay on the floor to watch the work and chat in the semi-darkness. Though for me the work still lacks the power of much of Dean’s work, this time I liked it. For all my reservations about the piece, and my ennui at its conscious referencing of the work of others, the space took over and the work was transformed by it. And so it comes back to this: the Turbine Hall is a difficult space for art, but a generous one for all that.

On a scale that dwarfs even the largest museum spaces elsewhere and with an uncompromising industrial edge, the space seems to cry out for, say, the work of Richard Serra, but when offered something more modest it is able to accommodate it with aplomb. If the artist achieves the improbable – and many, maybe most, of those so far commissioned to make works here somehow do, rendering my use of the word improbable at best highly inaccurate on the basis of so much evidence to the contrary – and turns this vast industrial cavern into a social space, the work within it can engage the audience and offer it a place to hang out, to play and maybe even to take pleasure in art made on the most ambitious of scales.