Michael Shannon has officially become Hollywood’s go-to Man On The Edge. Ever since he literally drove Ashley Judd insane as a disturbed war veteran in William’s Friedkin’s paranoid skin-crawler Bug, he’s played an impressive range of notes on the scale of crazy. From his Oscar-nommed performance as Leo and Kate’s outspoken, fresh-from-the-asylum neighbour in Revolutionary Road to buttoned-down federal agent Nelson Van Alden in HBO’s mobster drama Boardwalk Empire, “intense” is too quaint a term for the brand of simmering, quasi-alien danger Shannon conveys: there’s a sense that any of his characters could snap at the drop of a hat.

What’s surprising about his bravura turn in Take Shelter, then, is how completely human and recognisable it is, how un-alien. Much of the Shannon canon has fascinated and repelled in equal measure – you wouldn’t be best pleased to run into Van Alden, or Bug‘s Peter Evans, down a dark alley. Running into Take Shelter‘s tortured blue-collar family man Curtis, on the other hand, you’d probably be fine with. You might even be inclined to offer him a pint and a sympathetic ear.

And God knows he could do with one. We’re introduced to Curtis in the midst of what appears to be an apocalyptic storm: ominously dark clouds gather, a harsh wind blows, and (in case you’re thinking that sounds like a pretty average British summer’s day) viscous brown oil begins to fall in the place of rain. And though he wakes up, this is no “it was all a dream” cop-out – the sense of impending dread lingers with us, and with Curtis, from those haunting opening shots onwards.

Director Jeff Nichols, who directed Shannon previously in Shotgun Stories, is shrewd to establish this atmosphere of doom from the start, because it’s crucial to what becomes the film’s central question: is Curtis seeing the future, or losing his mind? An overwhelming sense of dread is an appropriate response to the knowledge of an oncoming, deadly storm, but it’s also a potential symptom of the type of mental illness Curtis fears he may be developing – his mother, we learn, was diagnosed with schizophrenia in his childhood.

As his fears begin to bleed into his waking life, Curtis’s behaviour becomes more and more erratic as he’s plagued by hallucinations: thunder nobody else hears, distant lightning nobody else sees. He relegates the beloved family dog to the back yard following a vivid nightmare – much to the bewilderment of his wife (Jessica Chastain) and hearing-impaired daughter – and becomes fixated on building an elaborate underground tornado shelter that the family can’t afford.

Economic anxiety is as crucial to Take Shelter as any other kind, and Curtis’s desperation to protect his family from a savage, unstable environment might be taken in part as an allegory for the fears of an entire nation in an unstable economic climate. Early on, a friend describes how he envies Curtis’s idyllic family life and home but all this does is reinforce just how much Curtis has to lose. The fragility of his world, of everything he holds dear, rightly terrifies him, and it seems to be this that’s driving his descent. His daughter’s disability, rather than serving as a heartstring-tugging plot machination, illustrates this point – there’s a possibility she could hear again with a cochlear implant, but the only way the family can afford the operation is through the health insurance Curtis’s job provides. As his increasingly irrational behaviour starts to jeopardise his work, it’s painfully clear that his desperate efforts to protect his family are only putting them in far more real, more immediate danger – ultimately, he may be the storm from which they need to take shelter.

It’s all the more impressive, given this self-destructive bent, that Curtis never veers into being genuinely frightening. However irrational his actions we are firmly on his side, afraid for him rather than of him, and while much of the credit for this must go to Shannon’s deeply sympathetic performance, it’s also down to the level-headedness that’s afforded him by Nichols’ script. His struggle to understand himself plays much like the investigative portion of a detective story – he goes to the library to research his symptoms, visits his mother in an assisted living facility  to find out more about her illness, and tries his best to get himself a diagnosis despite the obviously inadequate mental health services in his area. He does, in other words, everything a rational person should do, whilst simultaneously acting on impulses that are anything but rational. There are few more frightening prospects than a sane man who knows he is losing his mind, and watching Curtis quietly scrabble for purchase as he slips gradually into psychosis is one of the most affecting experiences you’ll have at the cinema this year. 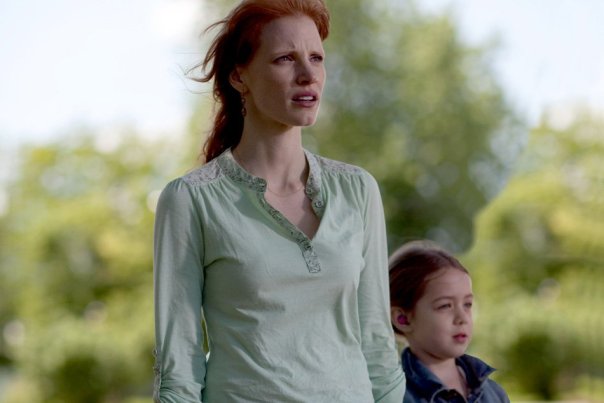 If the film’s first half is defined by those early wordless dream sequences, its second half pivots on two lengthy, dialogue-heavy standout scenes – the first a long-awaited explosion, the second a tense, intimate power struggle. They’re yet more powerhouse moments for Shannon, but what’s more notable is the scope they both give to Chastain. As ubiquitous as she’s been this year, many of her characters have felt half-formed at best and while there are no fireworks demanded of her here it’s a thrill to watch her embody a full-blooded, three-dimensional person, a gentle, supportive wife with a core of steel (and no apparent powers of levitation).

The central ambiguity of whether Curtis’s visions are madness or prophecy plays out right up to the final moments, which are likely to be the film’s most divisive. But regardless of where Nichols – and we – ultimately come down, it’s the struggle that matters, and Shannon’s understated, wrenching central turn that keeps us gripped by the throat throughout. A rich, affecting and psychologically nuanced character study, Take Shelter’s images will haunt you as profoundly as the questions it leaves unanswered.

Take Shelter is released this Friday.