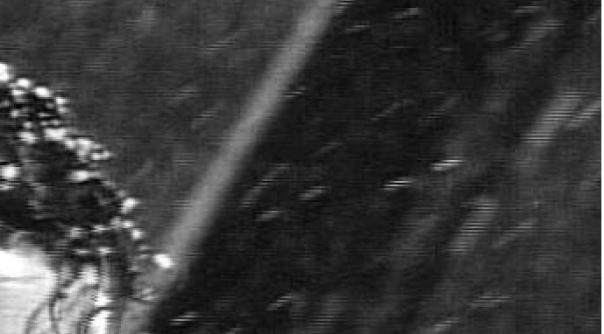 Snow falls into the black river beneath him. George knows how cold the water would be – he still has nightmares about going under to rescue his brother. As he remembers, the ear that the cold killed starts to tingle, and at first George thinks it’s because of the memories. But then he realises there’s a voice there. Intimately cradled among the useless workings of his dead left-ear, it speaks to him, and says:

We both know that you’re not going to jump. You’re not a brave man, not in that way. A brave man wouldn’t still be living in the town he was born in. Oh, I know you’ve thought about leaving, even told yourself that you would. But here you remain. And that’s all this is deep down – this idea about suicide is just another plan for getting out of Bedford Falls that you won’t see through. Another dream you won’t realise.

I’m being hard on you George but that’s because I know you well. I know things about you that you’ve never told anyone else. For example I know that you still think about Violet, about the way she looks now and the way she looked when she was twelve, perched on top of a stool in Old Man Gower’s Drugstore. And I know what you thought about tonight, when that piece from the banister came off in your hand for the last time. How you held it and looked at it and all you could see was a blunt instrument. You could even picture the headline in the Bedford Falls paper: Disgraced Local Businessman Bludgeons Family. A story like that might even make the national papers. People would know who you were. Maybe as many people would read about you as read about your brother, the war hero. Maybe more – you wondered what was more likely to live on in people’s thoughts – all those lives saved on that troop carrier, or the few you could take in your own home tonight.

I know you were only joking George. A little dark humour, shared only with yourself. You’re a funny guy, George. I mean funny ha-ha, not funny the other way.

Or, seeing as it’s just the two of us here, we may as well admit that you’re a bit funny the other way too. Not that there’s anything wrong with that. Some of the greatest men in history have been a little strange. Believe me, I’ve known most of them just as well as I know you. The creative types especially. What I’m saying is, you’re not the first man to find himself having dark thoughts.

That brings me to why I’m talking to you now. This is a big night for you George, you’re in trouble, and the choices you make tonight will stay with you for the rest of your life. I’ve always taken an interest in people who find themselves in that position. Now, it’s likely that there will be other interested parties too, those that want to offer you a different perspective than mine, and they’ll be along soon, so we should be quick. But it’s me you’re talking to now. So hear me out.

Why not just leave? It’s no coincidence that you’re on a bridge. When you walk off of it, which you will, don’t walk off the side that leads back into town, walk off the side that leads out to the highway. Hitch a lift to New York, or if you’re tired of all this snow, maybe think about LA. Change your name. Disappear.  A clever man like you, one who knows how the world works, should be able to pull a trick like this off. It just takes some commitment. You’re wondering what you’ll do for money. OK, I’m just going to come out and say, because I know you’ve thought about this too. I think you could write – should write. Write about Bedford Falls even, if you feel you owe the place something. Because you know these people pretty well. You work in the Building and Loan, you know how they spend their money. An unimaginative man – a man like Potter – would look at your books and just see a series of deposits and withdrawals. You can see the patterning of hope against desire; who people wish they were set against what they think they can’t live without. A story locked inside every account. All it would take is changing some of the names. They eat that stuff up in big cities. Remember how big ‘Our Town’ was? Well, maybe something like that. Perhaps a little darker, knowing you.

I’m not saying you wouldn’t miss your family. But really George, and this is kind of my point, are you so sure that it’s a good thing to need people? Oh, I know how people talk. They tell you that what matters is the good you’ve done for others, that no man is a failure who has friends. But I say to care so much about what other people think of you is vanity. It’s insecurity. And to settle for that isn’t happiness, it’s complacency. That’s not the mark of a life well lived. What really matters is, can you be your own man. Have you carved out a place for yourself in the world on your own terms? The real failure George, the real sin, would be to die here so unfulfilled – because you held yourself back every time you reached out for something bigger. The way I see it is, if when you look back, you know you’ve been the man you knew you could be, that you’ve lived by your own terms and nobody else’s… well,  then you’ve really had a wonderful life. Forget what everybody else thinks.

Then George hears a call, and sees that a man is falling. The man is in the river now and he’s crying out for someone. The voice in his ear is saying

George, ignore him. He’s a phoney. You can tell from way up here. Look at him, splashing around down there, that’s not how a man acts when he’s really drowning.

But that voice is growing fainter, and is being replaced by another voice that George hardly knows he is hearing. The new voice sounds like his father’s voice, or maybe it’s his own voice, but George doesn’t have time to wonder, he has to do what he must do.

Someone needs my help. And so I must stay and help.

After all, it’s Christmas.

7 thoughts on “The Devil and George Bailey”