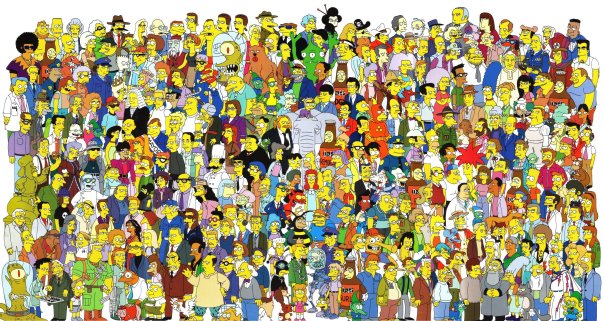 Gosh, The Simpsons is 500 episodes old (and marking the occasion with an episode featuring antipodean secret-spiller Julian Assange), whodathunk, etc? There have been grand claims made for the cultural significance of Matt Groening’s  creation – although such claims have decreased in frequency as the quality of the show has, so the consensus has it, declined. That consensus may be considered harsh, but if you were to ask people for their favourite episodes, few would come from the last ten years.

For those of you who haven’t followed Assange’s example and got into bed with Murdoch, so won’t be able to see episode 500 (I am dimly aware from the days of religiously rewatching golden age episodes on VHS that I am failing to comply with the official Simpsons episode numbering scheme), Mostly Links has instead collated for you collections of film, art and literary references in the show. Also, do you want to see every blackboard gag in one place? Of course you do.

Finished? Good – a little housekeeping for those of you who have been stratching your heads trying to figure out Mr Moth’s fiendish teddy-bear film puzzles. The answers are as follows:

Gone With the Wind

Gripes, etc. to Mr Moth’s Twitter, please. I was sure the second one was Hide and Seek Donkey.

Bruno Dumont’s Hadewijch is probably the best reviewed film of his career, although his austere arthouse films are always going to be a minority taste. It opens in the UK this weekend, and we will have a review on Monday. Here’s a – probably incredibly misleading – trailer:

The most anticipated mainstream opening of the week, on both sides of the Atlantic, is probably the Neveldine-and-Taylor-helmed Ghost Rider: Spirit of Vengeance, as we internet film types have apparently chosen to overlook the fact that Neveldine and Taylor ran out of ideas after half an hour of Crank, and have been getting steadily more tiresome since, culminating in that shit where Dexter does a song and dance number about 5 hours into Gamer.

OK, I have to admit, that does look pretty great.

In other stuff this week, videogames edition:

Martin Amis on arcade games: What we are dealing with is a global addiction. I mean, this might all turn out to be a bit of a problem. Let me adduce my own symptoms, withdrawals, dryouts, crack-ups, benders…