Martin Scorsese has famously described cinema as simply being “a matter of what’s in the frame and what’s out,” but when The Last Temptation of Christ was released in 1988, very few were willing to consider the film on those terms. This adaptation of Nikos Kazantzakis’ novel remains one of the most controversial films ever released by a Hollywood studio. It sparked protests, threats and even physical attacks, with a cinema in France being firebombed by a group of Christian fundamentalists for daring to screen the film. The charge was blasphemy, with the biggest bone of contention being a much talked-about sex scene between Jesus and Mary Magdalene. The fact that few of those criticising The Last Temptation of Christ had seen it, or had any intention of doing so, was apparently beside the point.

Is The Last Temptation of Christ a blasphemous movie? For some, simply messing with the image of Christ is an act of blasphemy, so on that level a film that deviates so radically from the gospels and portrays Jesus as a flawed figure must be regarded as a blasphemous one. But Scorsese did not intend his film as an attack on Christianity or a subversion of Christ’s message. The Last Temptation of Christ was a vehicle for Scorsese, and Kazantzakis, to explore the paradoxical duality at the heart of Christianity – the notion that Jesus is both fully human and fully divine. If he is God then he must be all-powerful and invulnerable to moments of weakness, but if he is a man then he must have free will and must yearn for the same pleasures as all of us. How do you bridge the chasm between these two ideas?

The Jesus presented to us in Scorsese’s film is the most human and psychologically complex we have ever seen onscreen. He’s a man who knows that God has a task for him but who doesn’t quite know what that task involves, and who feels increasingly inadequate to play the role assigned to him. This Jesus undergoes a voyage of self-discovery, struggling to decipher the signs offered to him by God as he attempts to work out the right path to take, and gradually coming to terms with the extent of his own abilities and influence. In Willem Dafoe’s extraordinary embodiment of the character, there’s a great sense of uncertainty and curiosity, which instantly makes Jesus a more relatable figure for the audience. In particular, watch him in the miracle sequences: when Jesus turns water into wine he smiles as if he has just performed a party trick, but when he reaches into his chest to remove his heart, or raises Lazarus from the dead, a look of wonderment and disbelief comes over him. Jesus is unsure where all of this is leading and is understandably scared by the prospect.

For viewers accustomed to the lavish Hollywood biblical epics that upheld accepted notions of what bible stories should be, watching this Jesus waver so uncertainly is a bracing sight. In this respect, the character of Judas (played by Harvey Keitel) acts as a kind of audience surrogate, at one point exasperatingly saying to Jesus, “No, you listen. Every day you have a different plan. First it’s love, then the axe, and now you have to die. What good could that do?” In this story, Judas is Jesus’ most loyal and trusted companion, and instead of betraying Jesus for thirty pieces of silver he is a key part of the grand plan, reluctantly following Jesus’ order to turn him in. The conversations between Jesus and Judas form the heart of The Last Temptation of Christ, with the use of the actors’ own American accents and very straightforward language removing any possible obstacles for audience engagement with the arguments being put forth. This is another vital rejection of the clichés of those Hollywood bible stories, and one necessitated by the tight shooting schedule and $7 million budget. Everything here is handled in a very down-to-earth and direct fashion. The Sermon on the Mount scene shows Jesus talking to just a small group of listeners, the presence of Satan is depicted by a simple burst of flame, and the miracles performed by Jesus have a simple, handmade quality to them. Such an approach makes scenes that have become ingrained in our collective memory feel disarmingly fresh, forcing us to pay attention and really engage with what we’re seeing instead of casually registering it as something we’ve seen many times before.

While sequences such as Jesus stepping in to prevent the stoning of the prostitute or turning the moneylenders out of the temple may feel familiar to us, the final half-hour of The Last Temptation of Christ takes the story of Jesus into a completely new direction. As Jesus suffers on the cross, and calls out to God, “Father! Why have you forsaken me?” Scorsese pulls the sound out of the picture and focuses on a young girl sitting at the foot of the cross. She introduces herself as Jesus’ guardian angel, sent to save him, telling him he has suffered enough and that God is happy with him. She walks him away from the baying mob and tells him he is not the Messiah; a look of great relief washes over Dafoe’s face.

Jesus now has the opportunity to live life as an ordinary man. He marries Mary Magdalene (Barbara Hershey), and after her death he lives with Mary and Martha, raising a large family and growing old, happily working as a carpenter, and indulging in the pleasures that men take for granted. “I live like a man now. I work, eat, have children. I enjoy my life. For the first time I’m enjoying it, do you hear what I’m saying?” he tells Paul when he overhears the preacher telling a crowd about Christ’s death and resurrection, but he is told that the meaning of his story is more important to the world than the truth of it – print the legend. Finally, Jesus comes to realise that his place truly was on the cross and that this vision of an alternative life is nothing more than Satan’s final, seductive temptation. As a 70-year-old Jesus lies on his deathbed, Judas appears and labels him a traitor for cowardly refusing to play his part in the overall scheme. Jesus crawls outside to beg forgiveness from God: “I want to bring salvation, Father! Take me back! Make a feast! Welcome me home, I want to be your son!” and when he finds himself back on the cross, ready to die, the moment is all the more resonant because we have seen what he desired and sacrificed for us. He earns the right to say, “It is accomplished!” 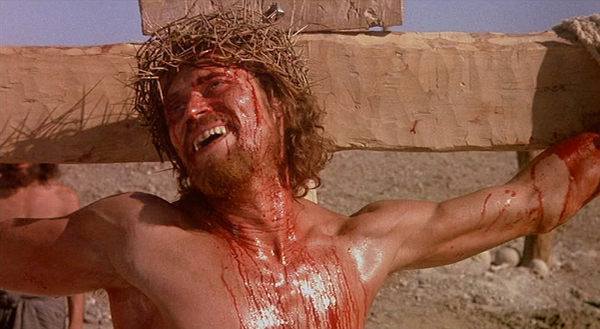 Far from being a blasphemous film, The Last Temptation of Christ strikes me as one of the most powerful and sincere affirmations of faith in all of cinema. It is the work of a director wrestling with his own ideas about his subject even as he makes it, searching for answers and inviting us all to share in his quest. Almost 25 years on, this is still the most anomalous film in Scorsese’s oeuvre, in the way it looks, the way it sounds (Peter Gabriel’s score – at once archaic and modern, foreign and familiar – is a masterpiece in itself), and more specifically in the way it feels. I find it to be his most deeply moving picture and a film that grows richer with each viewing, and if you can disregard any preconceived notions about the movie, if you can simply consider “what’s in the frame and what’s out,” then there’s every chance you’ll come away with a deeper understanding of Jesus, Scorsese, and your own relationship to both.

2 thoughts on “The Passionate Christ”