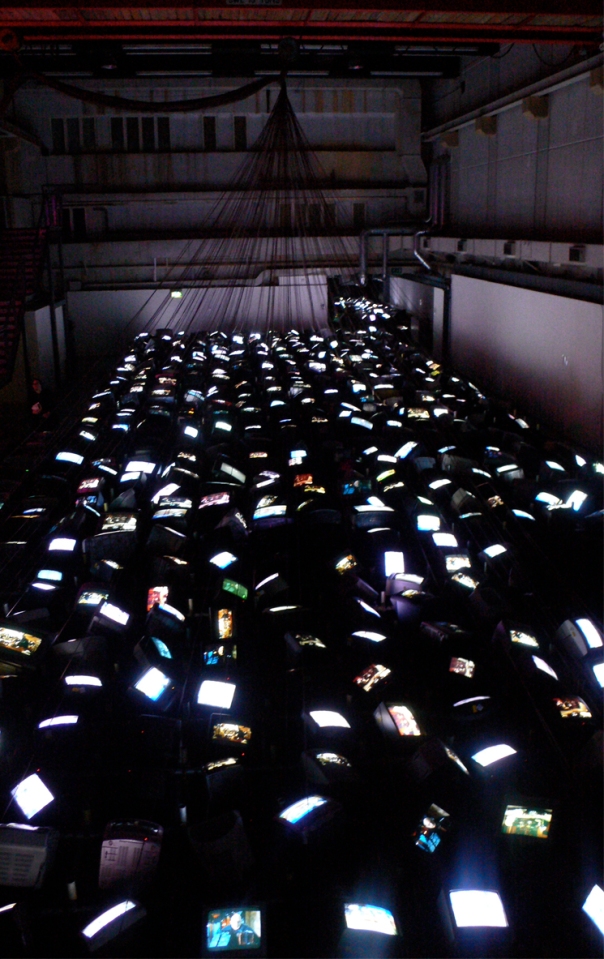 Forgive the cliché, but it’s the end of an era. Today the analogue television signal gets switched off. I know it’s long gone from some parts of the UK but the final stage of the switch-off is upon us and I live in London which is part of the last wave so I’ve been blithely ignoring the gradual loss of the analogue channels that’s been making its way across the country area by area for a few years. And okay, so it’s hardly the end of days. Telly will continue. For most of us, apart from the minor inconvenience of having to retune, and maybe install a digibox so that that old TV that we’re not quite sure why we still have keeps working, nothing much will change. But even so, it feels important somehow. And what better way to mark the occasion than to cram in as much analogue telly as possible while I have the chance? Fortunately David Hall’s exhibition End Piece … at Ambika P3 offers the perfect opportunity.

Ambika P3, for those who haven’t been (which is most people, I would think), is a cavernous, subterranean space hidden under a University of Westminster building on Marylebone Road. To get to the entrance you go through an unassuming red gate just by some public toilets. It may not be one of London’s most salubrious gallery spaces, but it is one of the most unexpected. It’s a former concrete testing site, not something I’d ever imagined existing on the Marylebone Road (possibly stupidly considering the proximity of the Westway).

It was the sound that hit me first. It’s there like a wall before you get through the doorway and into the space. A thousand and one is a lot of tellies and the noise they make when all switched on is cacophonous. The space is dark. Well not completely dark but lit almost solely by those thousand and one televisions. Looking out across the installation from above, the screens form a glowing pattern across the space, disappearing out of sight in a couple of places. Though the mezzanine at the entrance is high above the gallery floor, it’s easy to make out the repetitions – there are only five analogue channels after all – though some screens are much clearer than others. Mostly the colour is surprisingly muted but there are moments when lots of screens suddenly become intensely coloured, usually from adverts or pre-programme idents. My first visit was made before the demise of analogue BBC 2, so the few blank screens at that stage were due to the equipment failure that is an inevitable feature of the installation. The televisions here are reaching the end of their useful lives; they are large, unwieldy cathode ray tube sets gathered from council recycling schemes. By my second visit, after the BBC 2 signal had been switched off, a fifth of the screens had become snowy. With the switch-off of the rest of the analogue channels today, all the screens will broadcast the same fuzzy nothingness. The cacophony will be reduced to a hiss.

1001 TV Sets (End Piece) is a reworking of an installation Hall first made, in collaboration with the late Tony Sinden, decades ago: 60 TV Sets (1972), shown three years later as 101 TV Sets. The new work is different not just in being timed to mark the demise of analogue and in its increased scale – there are other differences that come from Hall responding to the particulars of the space. In the new installation the televisions are held in a low scaffold facing upwards so that both from above and from the floor of the gallery it’s possible to look out across a sea of screens. A thick bundle of cables runs along the ceiling to the centre of the space, from where individual cables fan out across the space to all points on the grid of televisions; the cable forms an umbilical cord, giving the televisions life. There is something strange and unfamiliar about perfectly ordinary televisions in this setting; catching glimpses of familiar adverts or the titles to programmes I would never watch punctures my view of the whole, taking my attention to individual screens. The cable bundle shatters any vestigial illusion of these televisions as domestic items; here they are component parts of something far larger, no longer each the focus of a separate room. The repetition of images is also overwhelming: so many screens, so little to actually watch. So much noise,so little chance to really hear anything.

The installation highlights the way in which we have moved away from analogue television and its limited offering of five channels to a fragmented brave new world of viewing. The current multi-channel world of broadcasting with on-demand catch up services is a far cry from the television culture of 1972 when 60 TV Sets was made. It’s hard to remember the days before video recorders let us watch programmes at a time of our own choosing and remote controls made channel hopping easier and attention spans shorter. The sheer scale of the piece serves as a reminder that we are now bombarded by more input than we can ever hope to process, so that many now choose the iPlayer over the television and the DVD box-set over real-time broadcasts.

The use of large, ugly CRT televisions – millions of which are being retired as digital high-definition television becomes widely available and ever more affordable – gives the work extraordinary physical presence. Though Hall has been best known as a video artist for several decades, he worked first with sculpture and this sensibility remains a key feature of his work. Though monitors remain widely used in art galleries, this is often as a compromise where space precludes projection. And when the choice to show on a monitor is a deliberate one the emphasis now is more likely to be on using the best affordable quality flat screen. For Hall, clearly the physicality of the box still matters – certainly it’s crucial to the success of 1001 TV Sets (End Piece) and not just for incorporating a reference to the past into a work which once looked to the future.

David Hall has used television both as the building blocks of an installation – as here – but also as a means of exhibiting. Clearly the use of televisions in the gallery space as a way of displaying video work is a very familiar strategy – though it was considerably less commonplace when Hall first used what he termed “time-based media” – but Hall also pioneered a different use of television. In 1971, commissioned by the Scottish Arts Council, Hall made ten “TV interruptions”: short video works that were screened on Scottish Television uncredited, unannounced and unexplained, as a disruption to normal programming, with the potential to intrigue and baffle their audience. This was, I think, the first time television in the UK had been interrupted by art in this way.

Hall witnessed some of the responses: “These transmissions were a surprise, a mystery. No explanations, no excuses. Reactions were various. I viewed one piece in an old gents’ club. The TV was permanently on but the occupants were oblivious to it, reading newspapers or dozing. When the TV began to fill with water newspapers dropped, the dozing stopped. When the piece finished normal activity was resumed. When announcing to shop assistants and engineers in a local TV shop that another was about to appear they welcomed me in. When it finished I was obliged to leave by the back door. I took these as positive reactions…”

I’m intrigued by television interventions such as this – or Keith Arnatt’s Self-Burial (Television Interference Project) which appeared on primetime television in Germany in 1969 – and the way they were allowed to break in to normal programming without explanation. I’ve long known about these works but only ever seen brief clips online, and clicking on a link after deliberately searching for such interventions means losing the work’s capacity to bewilder. In End Piece seven of Hall’s 1971 television interventions are on show as a multi-screen video installation: TV Interruptions (7 TV Pieces). With a different interruption displaying on each of seven monitors the work regains some of its ability to confuse. Though I know the work’s history and have seen excerpts from several of the videos, the work confuses me as each clip finishes and makes the jump to another screen. Though some pieces are silent, what sound there is overlaps. The monitors are positioned as a cluster so that most vantage points afford a view of two or three works meaning that watching one screen I’d find my attention drawn to other works seen out of the corner of my eye meaning that the installation became confusing, albeit in a different way to the bafflement that must have greeted these when they were broadcast. We have access to many more television channels now but it’s hard to imagine any mainstream channel submitting itself to interference by art.

In another space, Progressive Recession (1974) – a playful installation in which visitors appear on camera on a series of monitors while in the space, generally not on the screen they are facing – offers yet another approach to the use of moving image in art. Though this work perhaps has less to contribute to debates about the demise of analogue it does perhaps offer a timely reminder that what we see may not be what we expect and that everyone’s viewing experience is now different.