There are many great things about having small children and living in the country, but access to theatre productions isn’t one of them.  The formula for touring family shows seems to be pretty well set; take a classic text, a bare stage, half a dozen recent graduates, and some inventive staging (a sleeping bag…is a dragon!) and you’re guaranteed a slot at the local arts centre.  They’re almost always full of bounce and energy, but once you’ve seen one you’ve seen them all, and the songs are always awful.

So I was in two minds about the Bristol Old Vic production of Swallows and Amazons; on the one hand, another staging of a slightly fusty children’s classic, on the other hand, no matter how irritating Neil Hannon can be, he knows how to knock out a tune.

My biggest concern was that the production would put quotation marks around Ransome’s world of adventures.  Swallows and Amazons, more than almost any book I can think of, suffers from a disconnect between the real books (which, telling the story entirely through the eyes of the Swallows,  treats their world with utter seriousness) and the image of ginger beer and hockey sticks.   This does Ransome huge disservice; the Swallows and the Amazons may wear shorts and sail boats but their world is always grounded in reality, so I was somewhat dreading the show once I realised they were taking the Five Go Mad in Dorset approach of casting adults. 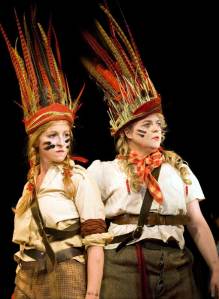 There is a terrible temptation to sneer at the past, and particularly to laugh at the innocence of so much 20th century children’s literature.  It’s always seemed an example of remarkable arrogance on the part of critics living in the unprecedented safety and comfort of the post-1960s West to patronise writers who spent the early part of their lives in the trenches or, in Ransome’s case, being sued by Lord Alfred Douglas and eloping with Trotsky’s secretary after the Russian revolution..

My fears were completely unfounded; I’ve rarely seen a production as deliriously funny, exciting and touching as this and, with a couple of tiny exceptions, the producers at no point made the slightest attempt to apologise for the book.

I saw Swallows and Amazons with six members of my extended family, from my four-year-old daughter to my 75-year old father.  Like many families we have a long relationship with the books;  the copy of Winter Holiday I’m reading to my daughter was given to my mother for her tenth birthday, and most of my most memorable childhood holidays were spent on Windermere (in a chalet, rather than an old tent, but still).  From the first scene, all of us were completely gripped and transported to the lake.

The script is a solid – and almost entirely straight – version of the book, though it strips out what Neil Hannon refers to as “all that nonsense about reef knots” and subtly reverses the class relationship between the Walkers and the Blacketts (in the books it’s very clear that the Amazons, who at one point simply dismiss the local policeman, are quite some way posher than the Swallows, with their Australian mother).  Neil Hannon’s songs are a complete joy, with far less of the over-clever jokes that he must have been tempted to put in (okay, except “Raised by our mama on the banks of the Amazon delta/with nothing but the clouds and a four-bedroom house for shelter” but who could object to that?).  I would normally post a link to the best of them, but all I can find is a clip of Hannon singing one:

What you miss there is the glorious performances.  With the exception  of Stewart Wright’s frankly slightly creepy beginning as Roger (which is, I suspect, the nature of playing a seven-year old boy) every one of the main cast is impeccable.  The reviews tend to highlight Akiya Henry who carries most of the weight of the play as Titty, but I was equally impressed with Celia Adams who gives a real threat to Nancy, and Richard Holt who takes possibly the most thankless role in the play and brings it completely to life.  John Walker is the other emotional pole of the story and Holt carries all his repressed emotions, determination, and makes the humiliation of one pivotal scene genuinely touching. 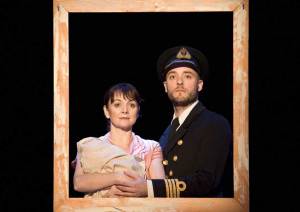 The real triumph of the show is in the staging.  I began by being slightly rude about the tendency of touring theatre productions to make the most of limited resources  (a man in goggles is…a goblin!) and to an extent Swallows and Amazons plays the same tricks.  Both the ideas and the executions are so far above the usual run of these things as to render the comparison almost insulting.  Some of the best moments in the show are best left unspoiled, but I’ll just mention some of the quieter grace notes – clapping and snapping fingers to create a camp fire, and the use of frames to convey both photographs and the view through telescopes.  The bigger coups were almost buried in spontaneous cheering.

The show is coming to the end of this tour, but is playing in Cardiff this weekend and will no doubt be revived; with or without kids it’s a fantastic way to spend an evening.

Jim Eaton-Terry tweets on occasion and can do a reef knot, but not start a fire without newspaper.

2 thoughts on “Swallows and Amazons Forever”