In the second of a two-part series, Viv Wilby looks at the way Gone With The Wind tells its story through costume. Read part 1 here:

A series of disasters awaits Scarlett on her return to Tara: her mother is dead, her father has lost his mind, the livestock has been stolen and the house has been ransacked. This is the hardest period of her life as she struggles to keep the household together in the dying days of the war and the early part of an uneasy peace. Rough homespun, faded prints, patched hairnets – every detail of the costuming illustrates how far the fortunes of the Old South have fallen. With their floppy sun bonnets, the O’Hara girls could be pioneers pushing west. Like pioneers their only means of survival is the land.

As we did at the end of the first half of the film, we’re seeing much greater equality between black and white characters: look how the checks on Mammy’s dress are echoed in the pattern on Melanie’s skirt, while the colour of Mammy’s apron and headscarf exactly match the colour of Melanie’s blouse. Scarlett blends in too, but remains the most colourful character. 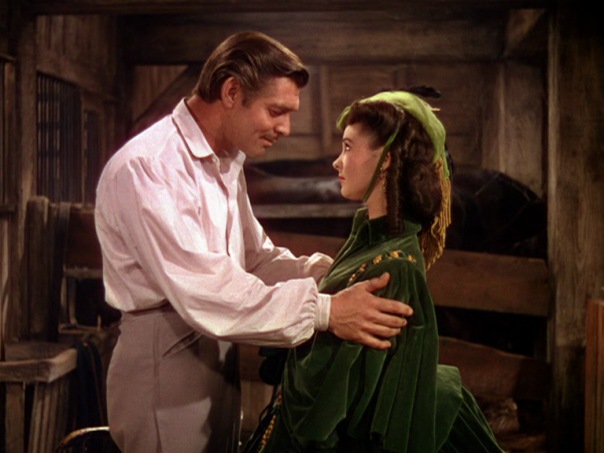 The victorious Yankees have levied impossible taxes on Tara, and Scarlett stands to lose the place unless she can pay them. She thinks she can borrow the money from Rhett Butler, but only if she can project an air of prosperity. And so she improvises, using one of the few things she has that are still undamaged: her mother’s green velvet curtains.

This is a wonderful costume as it conveys so much information. The dress is cumbersome and old fashioned, more eighteenth century than nineteenth. There are some faintly absurd touches: the chin strap under the hat and the way the heavy tassels and curtain cord have been incorporated so blatantly into the design. This dress is a fake,  a burlesque, and it doesn’t fool Rhett for long.

Scarlett is back in green of course, her colour of self-determination. Her motives are more altruistic this time, but this costume is a definite call back to the dress she wore to the Twelve Oaks barbecue. As she did then, she carries out a scheme to get what she wants, is thwarted and ends up marrying a quite unsuitable man. For (almost) the first time since her marriage, Scarlett wears her hair down, this time in girlish ringlets, recalling the Shirley Temple-look of the earliest scenes of the film. I like the Robin Hood hat: there’s a lot of the cocky, swaggering outlaw to Scarlett here. 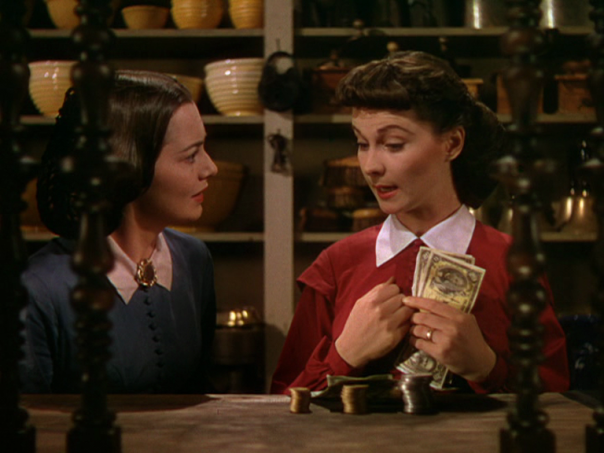 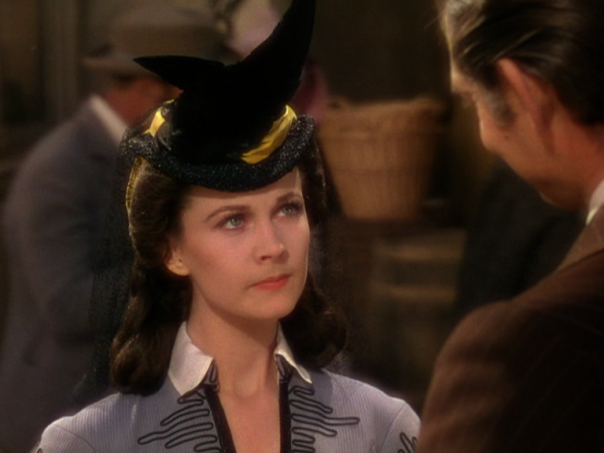 Scarlett marries Frank Kennedy (an ‘old maid in britches’), moves back to Atlanta and transforms herself into a businesswoman. Under Scarlett’s direction, Frank’s hardware store starts to thrive and she invests in a lumber mill. Atlanta is booming again and Scarlett is cashing in.

War and Reconstruction have transformed the South and Scarlett too. Gone are the frills and ribbons and bows of the pre-war days, these clothes are practical and contemporary and show up the green curtains-dress even more for the pantomime it was. In particular, there’s a masculine edge to her costumes here, just look at those stiff white collars. The horizontal detailing, particularly in the gold outfit up top, lend a slight military air. Scarlett is strong, strident and holding her own in a man’s world. 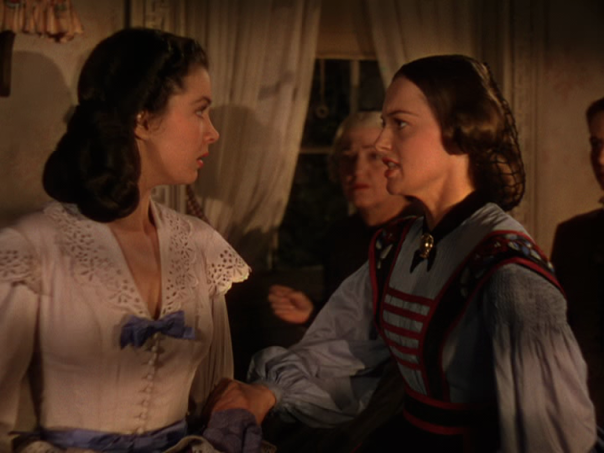 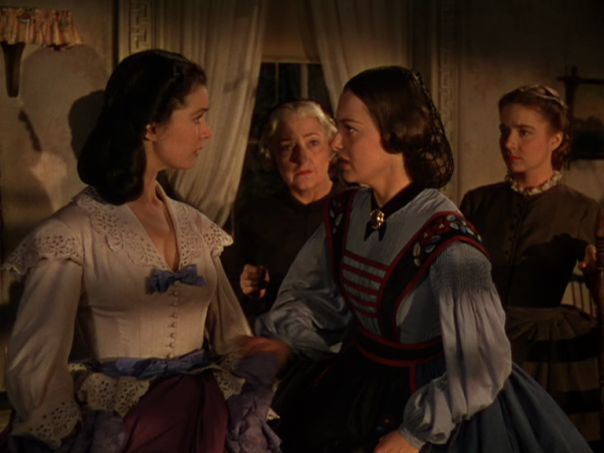 An interesting contrast between Scarlett and Melanie here and quite untypical looks for both. This is the scene following the attack on Scarlett at the shanty town as the women wait for news of their husbands, who have gone out on a vigilante mission. This is a scene in which Melanie is the one in control, for a change, coolly lying to the authorities.

Scarlett’s white blouse with it’s broderie anglaise details and blue bows gives her a very soft and feminie look, almost schoolgirlish or waifish. Melanie appears by far the stronger and more capable of the two: the high neck, the black neck tie, the strong red bars on her bodice.

As a side note, it’s remarkable how often Scarlett wears a deep V-neck, exposing her throat and bosom. Just scroll up, or take a look back at Part 1. 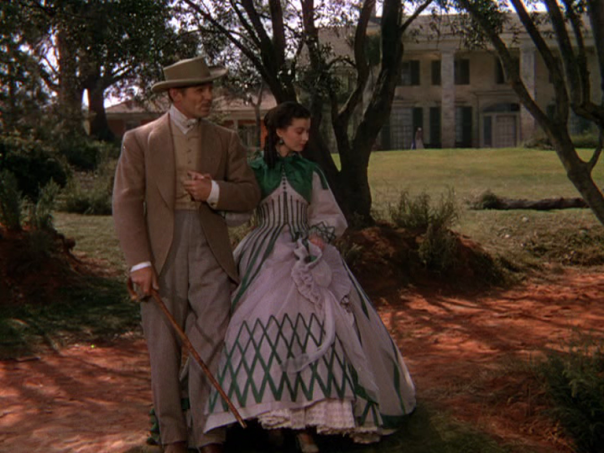 Scarlett has, thanks to her marriage to Rhett (we’ll skip over the proposal scene: she’s in a black mourning dress and there’s not much to say about it) , leapt from being comfortably off to being extremely wealthy, and it’s a showy new wealth that faintly appals the people of Atlanta. The Butlers’ honeymoon and the early part of their marriage is sketched in with a series of very brief scenes, showing many aspects of Scarlett’s trusseau. I’ve selected just a couple.

In the top picture, Scarlett and Rhett are dressed in matching white outfits, with just a touch of black: they’re in perfect harmony. These stand in for wedding outfits, perhaps, (we don’t see their actual wedding). There’s even a veil on Scarlett’s rather naff hat.

In the second one, they have returned to Tara and Rhett has promised to restore the plantation to its former glory. Is it significant that Scarlett is in green and white to mark this return home? ‘It’ll come to you this love of the land, there’s no getting away from it if you’re Irish,’ her father told her. 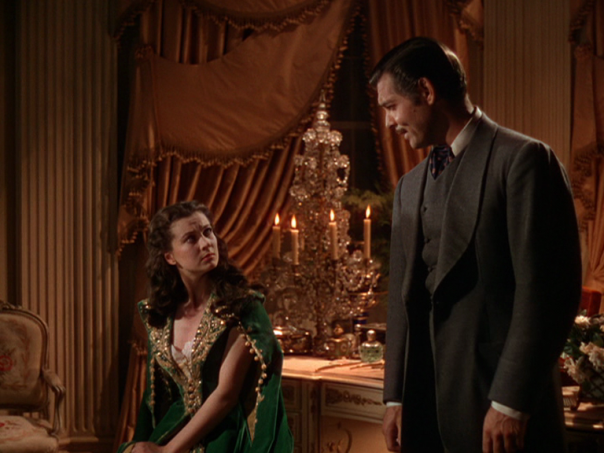 The Butler marriage has hit the rocks. After the birth of their daughter (Bonnie Blue Butler – always dressed in blue), Scarlett tells Rhett she doesn’t want any more children and banishes him from her bed and back to Belle Watling. Again, she’s in green for this act of self-assertion and defiance.

There’s a lot of these robes and housecoats in Scarlett’s wardrobe from here on in, and as the plot becomes increasingly soapy. The grand saga of the War and Reconstruction is all but forgotten from this point and the scope of the story narrows to focus on personal dynamics. 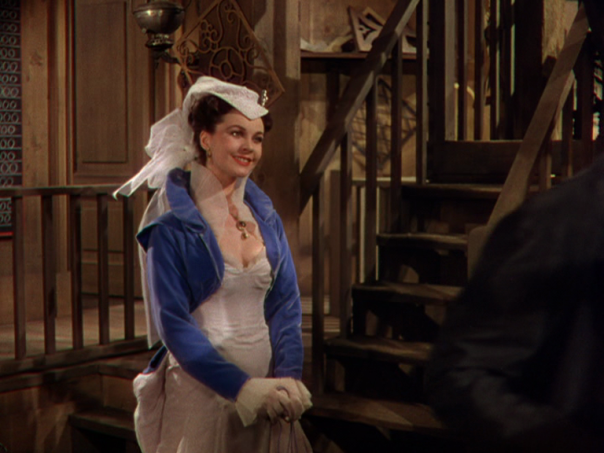 This is a very fashion-forward Scarlett, it’s a new and sophisticated look for her. The wide crinoline skirts have gone to be replaced with something much more slim-fitting. The hair is different too. No more chignons, it’s now swept up at the back in what, to twentieth century eyes, would have been a much more modern style. Even blue is a relatively unusual and fresh colour choice for her.

This is the scene in which she and Ashley are caught embracing (fairly innocently as it happens), the gossip spreads and Rhett plunders her wardrobe to take his revenge (see below). The script explicitly ackowledges the extent to which dress can tell a story and make a point. ‘Put on plenty of rouge,’ he tells her. ‘I want you to look your part tonight.’ 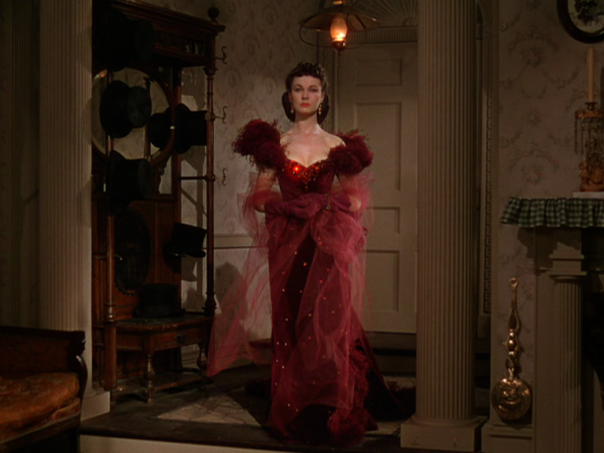 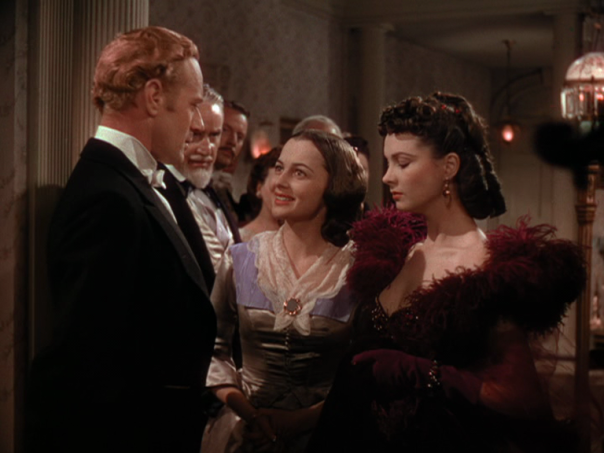 The scarlet woman! It’s all over town that Scarlett and Ashley are having an affair and of course it’s the woman who must bear the shame. Rhett makes her go to Ashley’s party, he makes her accept Melanie’s hospitality and makes sure she’s dressed like the wanton hussy everyone thinks she is. Everything about this dress – sequins, feathers, chiffon – explicitly recalls the costumes we’ve seen Belle Watling dressed in. It’s also far too expensive for the occasion. The Wilkes are doing well in a middle-class sort of way, but don’t enjoy the riches that the Butlers do. The contrast between the rich dress and the humble, gingham mantlepiece frill is almost embarrassing. Melanie is modestly dressed in silvery grey again.

Red and white for a rape. This is probably the most gothic scene in the film: a drunken Rhett taunts Scarlett about her obsession with Ashley, playfully suggests he might crush her skull between his hands before carrying her back up that long flight of red stairs. The symbolism is all pretty obvious here. The red robe with its white ruffled interior, the wide neckline and lapels. She’s basically dressed as a giant vulva. 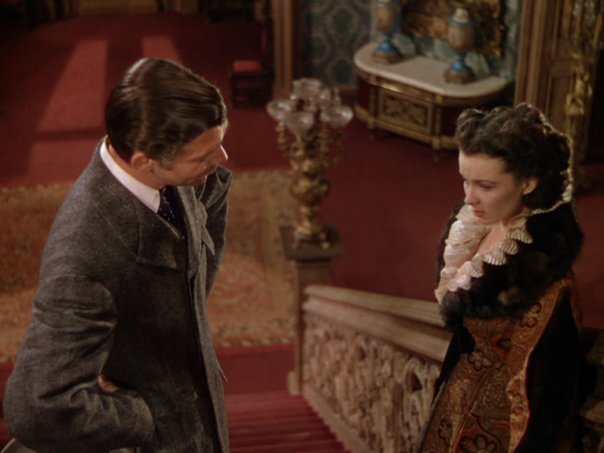 Scarlett’s sufferings are ramped up: Rhett leaves her, she falls downstairs and miscarries his child, and Bonnie is killed, an event that ultimately proves fatal to the marriage. As the film becomes more focused on these domestic dramas, so Scarlett becomes trapped in a domestic setting, housebound in her housecoats. The diamond-earrings and fur wrap that she wears to recuperate in the garden have more than a touch of high-camp, soap queen about them. 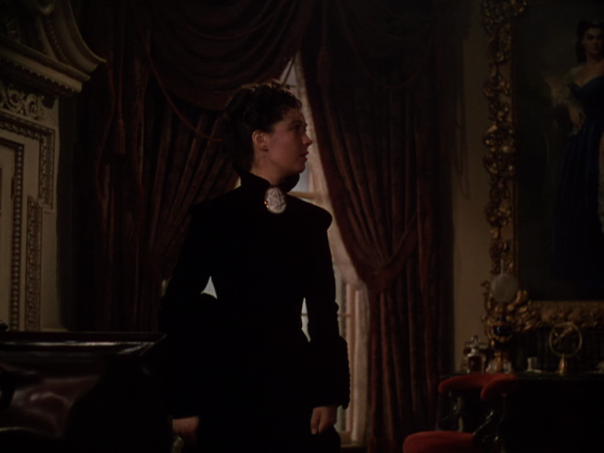 We began in white, and so we end in black. The film occasionally flirts with fairytale archetypes: if she’s Snow White in the first scene with her white dress and red hair ribbons then she’s transformed in the wicked queen by the end – look at that stiff high black collar. It’s a mature and serious look for a mature and serious Scarlett. The mid-nineteenth century crinolines and chignons have well and truly given way to the narrow skirts and ‘up dos’ that will endure into the early part of the twentieth. Scarlett ends the film looking to the future, and fittingly her costume is forward-looking too: tomorrow is another day.