I find the question of who my favourite filmmaker is much easier to answer than what’s my favourite film. The answer is, always, albeit after a couple of honourable mentions (Powell and Pressburger, Ozu, Hitch); Billy Wilder. And there is no more quintessentially Billy Wilder film than The Apartment. It’s both cynical and romantic, its characters both optimistic and hopeless and the same scenes are funny and desperately, devastatingly, sad.

CC Baxter (the inestimable Jack Lemmon – never better) is an anonymous drone in a huge New York insurance company, just one of 31,000 employees in a firm so large that he’s known more by his desk number (19th floor, section W, desk 861). Well, that’s how he would be known, if he hadn’t found a way to get ahead – leaving his Manhattan apartment to his superiors so they can entertain their mistresses.

Wilder got the idea for the film, he claims, from watching David Lean’s Brief Encounter and wondering about the character who gives Trevor Howard the keys to his flat. You would think that it would be hard to endear that character to an audience, but Lemmon is so innately likeable that it’s not a problem in the slightest.

He plays Baxter as someone who teeters between regret at having lent the key to his apartment in the first place, and someone who lives in forced, but blissful ignorance of what goes on when he’s not there. In spite of this, Wilder and Izzy Diamond (the second of two frequent co-writers in Wilder’s career, after Charles Brackett) don’t let him off the hook. At no point in the film’s set-up does he refuse the promotions, special attention or praise that his apartment earns him.

It’s easy to suspect that he would quite like it all to be over, though, especially as he begins to feel taken advantage of; so when he learns that the big boss, Mr Sheldrake (a splendid, oily Fred McMurray), wants to see him, he expects that it will be to tell him that the shenanigans must stop. He arrives for the meeting with a terrible cold – a consequence of having spent the previous night outside in the freezing rain while one of his bosses overstayed his welcome. 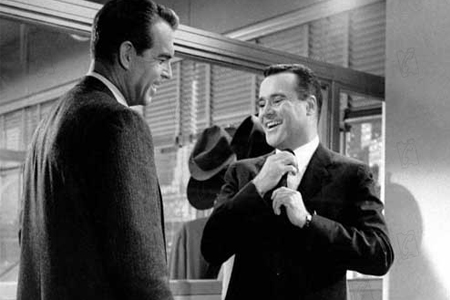 Scenes between Sheldrake and Baxter are the most important in the film, and this one is a delight of physical comedy, farce-like misunderstanding and the quintessential art of setting someone up for a fall. Of course, Sheldrake’s intentions are anything but pure, and his use of Baxter’s apartment is the catalyst for the film’s central question: can Clifford Calvin Baxter grow up, and be a mensch? It’s a question posed to him by his neighbour, Dr Dreyfuss, who along with his wife believes Baxter to be responsible for the never-ending parade of women in and out of their apartment block.

The reason it all revolves around Sheldrake (incidentally, a name Wilder frequently uses) is inevitably a girl. Baxter is smitten by an elevator girl at his firm, Miss Kubelik, played by Shirley MacLaine, at the age of just 25. It’s easy to see why Baxter would be so taken with her. Unfortunately, she’s been taken by Mr Sheldrake, and Baxter is confronted by the moral weight of his actions when he returns home to find Miss Kubelik unconscious in his apartment having attempted suicide.

As with all of the best Wilder films, the script crackles. The leads, and supporting cast, are all given plenty of great dialogue, and those supporting characters, from the gaggle of middle-aged adulterers with whom Baxter works, to his exasperated neighbours, are fleshed out fully to give them more impact and resonance. Wilder always had great skill with actors, and none of his leads had ever been much better than here. While McMurray had flashier roles, such as in Wilder’s own Double Indemnity, this was amongst his bravest performances, coming as it did in the midst of a lucrative career playing a collection of ‘good’ guys and ‘Disney dads’. MacLaine is luminous, and Lemmon an absolute marvel. 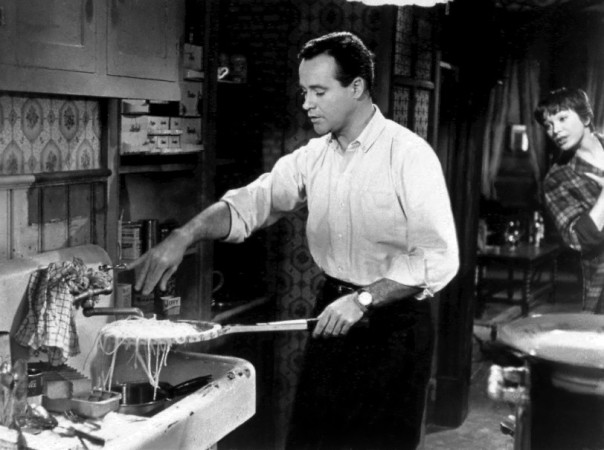 In my opinion, Lemmon is the most watchable American screen actor there’s been. From the start of his career to the end, all of his performances are imbued with a magnetic quality that transcends the status of the film. There are films where his performances are more powerful – Days of Wine and Roses, Missing, Save the Tiger – but this is him at his most vulnerable, and nakedly charismatic. It’s an extraordinary piece of work, from an extraordinary actor.

The Apartment could have been any number of different films, given Wilder’s skill and versatility. There are moments when the film is a satire of corporate America, where it’s a romance, where it’s a bitter drama about the inequality of power in relationships. At its heart, though, it’s a film about Baxter, a film powered by Jack Lemmon’s sensational performance, as he comes to terms with the consequences of doing the right thing.

As the film proceeds, in spite of his moral, um, flexibility, earlier on, we have no doubt that he’ll take care of Miss Kubelik for exactly as long as she’ll let him, no matter the consequences to himself and his career. It should be evident that it won’t work out – the chances for the relationship are doomed from the start, really. She acknowledges as much when she asks the heartbreaking question “Why can’t I ever fall in love with someone nice like you?”.

Still, Wilder ends the film with the two in a burgeoning relationship, he looking after her as she recovers. That the final line of the film has become so famous is almost a shame. It’s a smart, funny, unexpected line and it’s typical of Wilder to end the film on a declaration of love being teasingly acknowledged, and playfully rebuffed, but where the film soars is in the final showdown between Baxter and Sheldrake.

Baxter does as his neighbour and, by this point, friend, Dr Dreyfuss, demanded of him. As he tells Sheldrake just after quitting – “I’ve decided to become a ‘mensch’. You know what that means? A human being.”

The Apartment is on limited release from tomorrow.