When people think of Michelangelo Antonioni now, they think  (although he was active as a filmmaker from 1942) of the radically reinvented director who emerged in the early 1960s. Antonioni had always had a rather fluid relationship with conventional narrative storytelling but when L’avventura screened at the Cannes Film Festival in 1960, his outright rejection of a traditional plot in favour of mood, mystery and atmosphere caused a sensation. L’avventura was booed at its festival screening and many critics derided the film’s slow-paced sense of “Antonioniennui”, but others hailed it as a masterpiece and the film became an unexpected popular hit. He followed this success with La notte and L’eclisse, completing a morose trilogy of alienation and dislocation that defined his filmmaking philosophy.

Red Desert was the director’s next film after making this trilogy, and it marked another key stage in his development. Given the fact that he was such a visually orientated artist, it’s perhaps a little surprising that Antonioni waited so long before embracing colour filmmaking, and it had in fact been something that was on his mind for some time. As far back as 1940, when he was working as a critic, he suggested that, “in a few years from now black-and-white films will become unbearable. Audiences are getting used to colours.” Red Desert certainly shows us how much thought he had given to the way this new tool should be used, even if the predominant colour, especially in the film’s opening sequences, is grey.

The key recurring image in Red Desert is that of people being dwarfed by the gargantuan industrial buildings and structures that surround them. Antonioni was drawn to the new landscape created by Italy’s post-war industrial boom and fascinated by the machines that made up such a large part of that landscape. “In 2001: A Space Odyssey, you know, the best things in the film are the machines, which are much more splendid than the idiotic humans” he said, “In Red Desert, I also confronted this technology and these machines with human beings who are morally and psychologically retarded and thus utterly unable to cope with modern life. In my films it is the men who don’t function properly – not the machines.” That last sentence is perhaps the best possible synopsis of Red Desert. 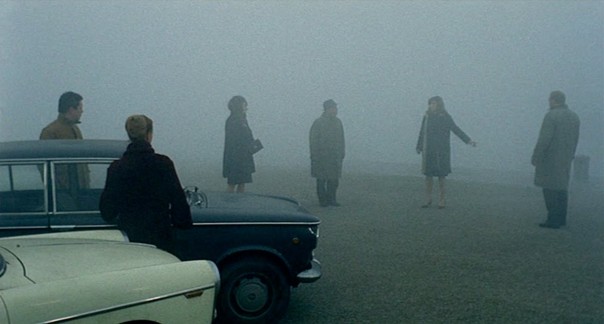 Out of this bleak wasteland, it’s impossible to miss Monica Vitti as she walks towards the camera in her striking green coat. She plays Giuliana, and we are instantly puzzled by her actions, as this respectable-looking woman buys a half-eaten roll from a factory worker, ignoring his mention of a shop around the corner, and hides behind a bush to eat it ravenously. We soon learn a number of facts about Giuliana that help us put her behaviour in context. The wife of a factory manager (Carlo Chionetti, a lawyer appearing in his only film) who makes little attempt to understand her malaise, Giuliana suffered a car crash some time before we met her, and it is clear that the effects of this incident are still being felt, exacerbating her anxiety disorder. “She still can’t…mesh” Giuliana’s husband tells Corrado (Richard Harris), a business associate visiting the plant, but Corrado is instantly smitten by this strangely distant beauty.

Monica Vitti met Antonioni in 1957 as he was working on the postproduction of Il Grido, and they began a personal relationship that would span the next eight years and Antonioni’s next four films. Vitti’s brilliant performance in Red Desert, as a woman out of step with the world around her, is the best reason to see the film. It is suggested throughout that her car crash was a suicide attempt, and the look in Vitti’s eyes often betrays her fear and sense of isolation, and her inability to join the rest of the human race in simply getting on with life. With relatively little dialogue, Vitti’s performance renders her character’s emotional disturbance in a remarkably vivid way, while Antonioni’s compositions and aural manipulations show us the world from her skewed perspective. The film also gives us insights into the world that exists inside Giuliana’s head; dreams and fantasies that, along with her relationship with her son, go some way to stabilising and sustaining her. We see how much more alive she seems when discussing the colours of the shop she wants to run (one environment she might be able to control, although she hasn’t yet decided what she wants to sell). Later, in one of the film’s most memorable moments, she recounts to her son the story of a young girl on a beach,  which Antonioni presents to us in a sun-drenched sequence that is a startling detour from the oppressive wintry tone of the film.

Red Desert can make life difficult for viewers who are not immediately on Antonioni’s wavelength. The pacing and sense of abstraction forces us to readjust to the film’s rhythm, and its opaque nature makes it hard for us to get close to its characters – literally, in some cases, as Antonioni has a habit of flattening the image and foregrounding structures and inanimate objects, drawing focus away from the human figures in the frame. The film’s emotions are muted too, which is particularly bad news for a tempestuous actor like Richard Harris, who never seems entirely comfortable in the dubbed role of Corrado. (The whole film was a rough experience for Harris, who fought constantly with Antonioni and eventually walked out of this frying pan to join the fire of Peckinpah’s Major Dundee. Some shots of Corrado use a body double.)

Nevertheless, even if Red Desert is not an easy film to embrace, most viewers will still be hypnotised by Antonioni’s stunningly controlled mise-en-scène and I’m sure many of those viewers will return, as I have done, to explore the film’s mysteries and incongruities further. Amid many strange and inexplicable moments in Red Desert, I remain haunted by the appearance of a street merchant early in the film, who sits silently with a despairing look in his eyes, next to a cart full of merchandise that’s as grey as the walls behind him. His presence is never accounted for or even given much weight within the context of the film, but it’s one of those teasingly elusive touches that makes Red Desert such a fascinating, maddening, seductive film. Of course, the director wouldn’t want it any other way – “Any film that can be described in words” he once said, “isn’t really a film.”

Red Desert is re-released at BFI Southbank and other selected cinemas from Friday.