“This is a story about a man who transforms himself from Mr Chips into Scarface”.
Vince Gilligan – The Guardian, May 19, 2012. 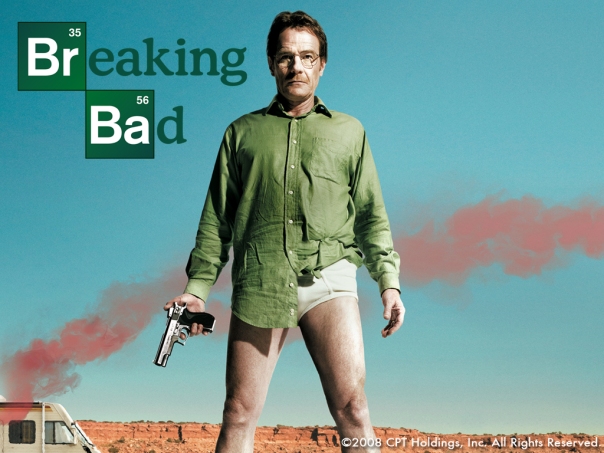 For the past two months or so, fans of Breaking Bad have been ecstatic, watching a run of episodes that have seen the show reach new heights. For the next ten months or so, those same fans will be driven crazy by not knowing what’s coming next. I find some comfort in the fact that I can postpone the sense of emptiness and loss that will inevitably follow when there will never be any new Breaking Bad to look forward to, but it’s overshadowed by the nervousness and paranoia that summer 2013 will never arrive.

It’s perhaps a little too on the nose to compare the effect of Breaking Bad to the effect of the crystal meth that Walt and Jesse manufacture and sell in the show. It’s certainly no exaggeration, though, to say that I’ve never found TV so exhilarating, nerve-shredding, powerful or addictive. With just 8 episodes left, as far as I’m concerned, Breaking Bad is the Greatest TV Show Ever Made™. I’m a big fan of most of the other popular choices for that title, from The Sopranos to Six Feet Under, The West Wing to Gilmore Girls (ahem), but I have no doubt in my mind that Breaking Bad beats them all.

I would hope that most people know the set-up of Breaking Bad, but given its particularly shoddy treatment on UK TV, maybe not. It’s the story of Walter White, a middle aged chemistry teacher, who needs to work a second job to support his family. In the show’s pilot, two things happen that change him completely. Firstly, he discovers he has terminal cancer; secondly, he accompanies his DEA agent brother-in-law, Hank, on a stakeout and bust of a crystal meth lab.

While the bust takes place, Walt sees an underachieving former student fleeing the property. Spotting an opportunity to use his chemistry skills to create a superior product, he reaches out to his ex-student, Jesse Pinkman, to form a partnership, and enable him to earn the cash that will support his family once he’s gone.

With the show now half-way through the final series, and on that year-long hiatus, it’s a good time to consider what makes the show so great. One of the things that impresses me the most is how the show seems to have consistently improved, from its already pretty great beginnings in series 1. While The Wire’s final series was a real disappointment, and other shows have had peaks and troughs, for the most part, Breaking Bad has simply improved, episode on episode, series on series.

There are a number of possible reasons for this, of course. For one thing, the writers and actors have become ever more comfortable in the world of the show, allowing them to develop themes, motifs and character traits that have deepened and enriched the whole thing. While I don’t doubt that this is the case, there seems, to me, to be more to the show’s improvement, and it lies in the pacing.

In the first episode of the first series, Walter White has just turned 50. In the fifth episode of the fifth series, we see him turn 51. We’ve spent, roughly, 50 episodes with him, his family, and his life in that period. The weight of what has happened to him has happened to us, in what feels like real-time (without any of the ludicrous plot holes or gimmicks that blighted 24, for example).

The show is incredibly well plotted (something I claimed once before for How I Met Your Mother), and it utilises its own mythology and history to great effect. A seed laid in series 1 or 2, can come back to bite a character at any point. That plotting has kept the audience incredibly invested. This is a show you can’t take your eyes from, in case you miss something you’ve been waiting for for three years. Every episode is improved because our investment in what is happening is so great.

The investment wouldn’t necessarily be so great if it wasn’t for the fact that series creator Vince Gilligan and his team of writers and directors hadn’t proved to be so adept at creating and maintaining tension, manipulating the show’s audience into nervous pools of anxiety. Take an episode like ‘Fly’ from the third series. It takes place over the period of one ‘cook’, features only Walt and Jesse and, while it wouldn’t be apparently obvious to anyone who’s not a devout fan of the show that anything terribly important is going on, it’s my favourite episode so far. 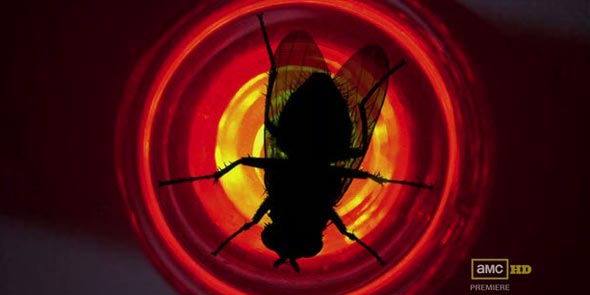 In it, Walt is manic, sleep deprived and, eventually, racked with guilt. He comes close to revealing something to Jesse that he never, ever should, and the tension is just about unbearable. The plot of the episode is, ostensibly, that Walt is worried a fly in their meth lab is contaminating their product, and he keeps on trying to kill it. That’s it. Yet it’s an incredible 47 minutes or so of television.

While the episode might be something of a departure for a show that is so plot-heavy, technically it’s the quintessential Breaking Bad episode. It contains montages, odd camera angles and perspectives, and looks fantastic, courtesy of director Rian Johnson (Brick and the forthcoming Looper). It is an astonishingly well-photographed show (somebody should be given a stern talking-to over the decision not to have released this on Blu Ray in the UK). It has an intense and distinctive visual palette that brings great beauty to both the vistas of New Mexico, where the action takes place, and the mundanity of the drugs business.

With Jesse and Walt, the show has created two of the most compelling and rounded characters in contemporary television. In Paul Duane’s excellent earlier piece on this site, he reveals that Gilligan had originally planned for Jesse to die at the end of the first series. It is to his credit that on seeing the performance of Aaron Paul, he rethought. While Bryan Cranston deserves all of the plaudits that have come his way for his performance as Chips/Scarface/Walt (three Emmy awards for Best Actor), Paul’s turn is no less extraordinary.

The two have incredible chemistry. Their scenes together are always a highlight in any episodes. Their relationship has changed so much over a year that all of the memories of what they’ve been through together are never far away from the surface. But it’s still important to point out that Breaking Bad is far from being a two-person show: Anna Gunn as Walt’s wife Skylar, Dean Norris as Hank, and Giancarlo Esposito as drug kingpin Gus Fring are all worthy of huge plaudits, while Bob Odenkirk as sleazy lawyer Saul Goodman and Jonathan Banks as fixer Mike Ehrmantraut are sensationally good.

Very mild spoilers for Series 5 below

So, with only eight episodes left, where does the show stand? Walt’s transformation into ‘Scarface’ is complete. His descent into darkness has been quicker, more violent and less glamorous or self-satisfying than anyone could have imagined. Gilligan’s essaying of the character has never wavered from his originally stated aim. With Cranston’s magnificent performances, he’s created a monster. A monster that just a year ago (in the show’s timeline) was one of the most likable characters imaginable. In that period, they’ve not missed a beat. Despite the huge change in Walt, it’s still, unquestionably the same guy. We have the answers for what could turn a man from Mr Chips into Scarface. Finding out has been exhilarating. Finding out what happens next will be unbearable, in the best possible way.

The first four series of Breaking Bad are currently available on Netflix.  Series 1 – 3 are available on DVD.