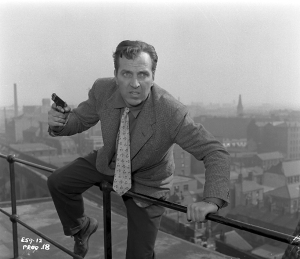 That title seems emblematic of film noir. In so many noirs the city is a malevolent presence, a place that seems both to warp and to be warped by the tortured psyche of the protagonist. If you had to send a telegram summarising the message of most film noir, the curt, four word missive: Hell Is a City, would be a pretty good way to get the job done cheaply.

But a part of what makes this film interesting are the other, non-noir traditions it draws upon. It’s British but it’s a markedly different work than the films I discussed in my MostlyFilm article on Brit Noir, back in March. Significantly, the three films I looked at then are set in London and the South. By contrast, Hell Is a City is set in Manchester. That shift north also brings with it a shift from a heightened reality to an emphasis on veracity. And along with that comes a more serious attempt to more authentically depict the lives of the British working-class.

Let me tell you about the film and mention some of the films it does nestle more comfortably amongst. It opens with Inspector Harry Martineau (played by Stanley Baker) and a colleague heading to the pub discussing Don Starling, a nasty bit of work Martineau previously sent to jail. Starling’s just broken out, put a guard into a coma and may be heading to Manchester, perhaps with the intention of picking up some hidden loot and putting a bullet into Martineau. Well, Starling is headed back to town, and he quickly gets a crew together to rob a bookie’s assistant. The robbery and the subsequent police investigation take up much of the rest of the film, which is full of authentic feeling details about both procedures. No doubt much of this comes from the source material, a novel by Maurice Procter, who served for over twenty years as a copper in Yorkshire. As such the film recalls other bluff, world-weary examinations of a policeman’s lot, like The Frightened City and John Ford’s Gideon of Scotland Yard. But we also follow Starling as well as Martineau, and it is his desperate need for a safe place to spend the night that lets us peer behind curtains, into the domestic set-ups of a cross-section of Manchester folk. Thus, the film evokes memories of It Always Rains on Sunday which also uses the device of a convict’s search for refuge to examine the features of a British community.

And this seems to excite director Val Guest more than the aesthetic potential of the streets of Manchester. This is a picture of the city – but it is the city as a real place for working people, not the city as a semi-abstract realm of shadows and footsteps. The closest the film comes to formal abstraction is when we move out of the city. There is a sequence where a body is dumped on a bleak moor to the constant unnerving whisper of wind through heather. It has something of the stylised blankness of the snowscapes of Fargo.

The moors are also the setting for another great sequence later on in the film involving an illegal tossing school. Now, one imagines that in another strand of British Society, the phrase ‘an illegal tossing school’ is likely to bring up memories of public school dormitories after lights out. But the tossing school we observe here is a makeshift venue for illegal betting: the kind of thing Nathan Detroit would have run, if he’d grown-up in Weatherfield. The police suspect some marked money from the robbery might be changing hands here, so they’re taking an interest. We watch a bunch of lads gather round and make bets on how many times someone can chuck two coins up in the air and have them both land heads-up. Guest loves filming the faces of the men – faces that look weathered enough to suggest these are locals rather than actors. The camera moves up with their eyes as they follow the coins, while the editing captures the rhythm of the throws. There’s a real pleasure in the way the film devotes itself here to the workings of the game – and the meshing of form and content Guest uses to capture it seems influenced by how the documentary filmmakers of the GPO Film Unit sought to document the different corners of British life in the thirties.

Now, this isn’t a total break from noir aesthetics because to some extent the genre was born out of two stylistically divergent film-making methods: on the one hand, it drew on Italian neo-realism, with its emphasis on location shooting and use of non-actors; on the other, it was influenced by German Expressionism, where stylised sets and dynamic camera angles sought to show us the world the way it might look to the films’ troubled characters.

If we think of some film noirs that seem more interested in realism than stylisation (and forgive ourselves for simplifying things) then we can probably name a few that would keep Hell Is a City in good company. Three films that spring to mind are Elia Kazan’s Panic In The Streets, Otto Preminger’s Where the Sidewalk Ends, and Stanley Kubrick’s The Killing. When you see trailers for such films, a booming American voice is usually making great play of the shocking parts of society the film exposes, and one can just about imagine that voice, shilling for Hell is a City, intoning ‘Exposed! The shocking secrets of Manchester’s tossing schools! Revealed! The Lacey Arms Pub, where killer and copper rub shoulders!’

So the film mixes this noir lineage with a British documentary style (Guest would directed the similarly documentary influenced The Day the Earth Caught Fire a couple of years later). But the Manchester setting is also a clue that the film was made and released in the Britain of kitchen-sink dramas and ‘angry young men’. It accounts for a sexual frankness (we learn it’s been a long time since Martineau and his wife had sex) and some still-nasty-enough-to-shock violence. Don Starling is a properly nasty bastard – a murderer and a rapist as well as a robber – so when he starts to menace a deaf and dumb girl the scene evokes genuine threat.

The Manchester setting also provides some of the film’s most enjoyable elements. Donald Pleasance plays Gus Hawkins, the bookie who is robbed, and it’s a portrayal of a provincial big little-man that is up there with the best of Corrie’s character turns. His baldy haircut and glasses also make him look like every photograph of Philip Larkin you ever saw. The film also has character names as tasty as the best of British noir: when a crook reveals the identities of his accomplices and the list of names goes: Clogger Roach, Laurie Lovett and Tawny Jakes… well, you can’t argue with that. And any film noir would benefit from the hero telling his femme fatale, ‘Ooh, you’re a bad lot, Lucky Lusk!’

But while it’s hard not to smile at these moments, it’s impossible not to admire the film’s sincere attempt to depict the lives of cops, crooks and working people, and the way these lives rub up against one another, in a manner that would be recognisable to its audience. When I looked at British Noir last time, I argued that it was their heightened reality and colourfully Dickensian character-sketches that made them worth a look. Hell Is a City serves as an important reminder that British Noir could still catch fire when it tried to show the country, and its people, the way they actually were.

Hell is a City is released on DVD today by STUDIOCANAL.

3 thoughts on “Hell is a City”