Mostly Film’s intrepid reviewers have been out and about at the London Film Festival.  Here is the first of two reports this week of what they’ve been watching.

John Dies At The End

During his introduction to the late night screening of John Dies at the End, director Don Coscarelli told how he was mulling over a sequel to 2002 cult hit, Bubba Ho-Tep, when he received an email from a ‘robot’ – one of those automated Amazon messages that recommends on past purchases, ‘you bought this, so you might like this’ etc.  The suggestion was David Wong’s book, John Dies at the End and for once, the robot was spot on.

John Dies at the End is a fun midnight movie.  Told in confessional flashback as a potential story to journalist Arnie Blandstone (Paul Giamatti), two paranormal investigators (Chase Williamson and Rob Mayes) have to save the universe from a gigantic evil demon called Korrock, helped by a mind opening drug called (and looks like) Soy Sauce.  Once the Soy Sauce takes hold, nothing is as it seems.  Characters develop psychic abilities and cross time and reality. The dead have telephone conversations with the living.  At least, I think that’s what happens.

The pace is frantic with a lot of information thrown at the audience in a short time.  So much so, that it’s possible to lose track of what’s going on.  Or maybe this is a device to hide the nonsensical plot?

There are some imaginative visuals and plenty of laugh out loud jokes – flying moustaches, a penis door handle.  Robert Kurtzman’s Creature Corps come up with some great monsters and while some of the digital effects look a bit ropey, this only adds to the charm.

Paul Giamatti is very funny as the sceptical journalist, who gradually comes to believe, and there are amusing cameos from Clancy Brown as a slick TV psychic and Doug Jones as an other-worldly being.

A mad, enjoyable film, best seen as late night ‘experience cinema’ or at home with friends in the early hours.  When the dog starts driving the car, you just have to go with it.

Robot & Frank is both a touching story of an elderly man facing the fact that he is in his final years, and an odd-couple comedy about one man and his robot.  Frank Langella stars as Frank, a divorced and (mostly) retired cat burglar spending his declining years pottering between his home and the local library, where he fancies librarian Susan Sarandon.  His son (James Marsden), concerned about his father’s ability to cope alone, buys him a new-fangled robot butler to act as his nursemaid.

Initially appalled at the idea, Frank gradually comes to recognises the Robot’s uses, and what the people who write official synopses invariably call ‘a surprising friendship’ springs up between them.  Especially once he realises how useful the Robot could be in when it comes to breaking and entering…

Langella and the Robot (voiced superbly by Peter Sarsgaard) make a delightful partnership, the old man’s grouchy demeanour playing off the Robot’s polite, but emotionless, concern.  Their dialogue is often pure sitcom: for example, when Frank concedes to the Robot that “You’re starting to grow on me,” the machine replies: “Thank you, Frank.  It’s time for your enema.”

The rest of the cast are also excellent (Liv Tyler is also in it, as Frank’s daughter) but Langella is the star.  Watching his distress, both as he faces losing the Robot who has become almost a surrogate son and accepting that he is losing his faculties, is extremely moving.  It’s impressive that director Jake Schreier and writer Christopher Ford are able to move between gags that would have looked old in an 80s TV show with emotionally resonant scenes between Frank and his family.  It’s an odd little film, and the mix of light SF and family drama may make it a difficult sell, but this is an undeniably charming film that is well worth a watch.

High school sweethearts Celeste (Rashida Jones) and Jesse (Andy Samberg) are separated, but still the best of friends, sharing juvenile ejaculation jokes, but infuriating their friends, who think that they need to wise up and divorce like grown-ups or get back together. If this were a rom-com they would get back together, probably after divorcing, remarrying, and match making their spurned second spouses. But this is an altogether smarter film with a serious question lurking under its wit and charm: what happens when the person you fall in love with at 18 is still the person you love, but not the one you’re in love with?

It soon becomes apparent that Celeste has left Jesse behind; she’s more ambitious and driven than him, and resents how she has carried him while he cruised through a creative career, but never really cared enough to become as successful as she thinks that he should be. The inevitable growing rift between them brings out the worst in Celeste, who starts to show her more brittle, unpleasant side. There are parts of the film where she almost loses all sympathy, and you will Jesse to get on with forging a new life, but the question remains, are they made for each other, and can they make it work or not. It’s all handled with great wit, and verve, and a lot of tenderness. So much that by the end of the film Celeste and Jesse Forever was one of my favourite films ever.

Celeste and Jesse Forever is sold out at the London Film Festival on 20 October, and screening again on 21 October. It goes on general release on 7 December. 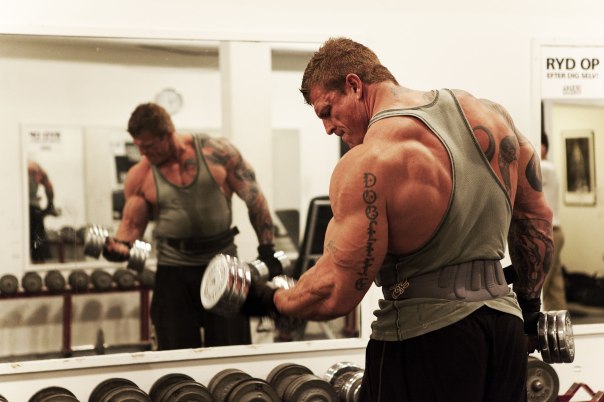 Screening as part of the festival’s ‘Love’ strand, this is a first feature from Danish director, Mads Matthiesen and winner of the World Cinema Directing Award: Dramatic at Sundance 2012.

Dennis is a dedicated body builder, a hulking 6’ 3” man mountain who dwarves everyone around him.  He lives in a suburb of Copenhagen with his overbearing, elderly mother and at 38 years old, he is also painfully shy and very lonely.  After a particularly awkward date with a local girl and attending his Uncle’s Thai bride wedding, he deceives his mother and boards a flight to Thailand to find a bride.  When he arrives, his naïve image of Thailand is shattered and instead he finds a flourishing Bangkok sex industry.  Which makes finding true love a little more difficult.

Aadapted from Matthiesen’s 2007 short film, Dennis, Teddy Bear is a gentle, if predictable tale of (late) coming of age, as Dennis finally grows up and escapes his mother’s clutches.

As well as having a head turning physical presence, Kim Kold is subtly affecting as Dennis.  A non-actor, who really draws sympathy from the audience as his monotone, single word replies convey his awkwardness and appalled feelings towards his situation, and sometimes brings a little comedy, too.  Elsebeth Steentoft’s portrayal of Dennis’ mother is monstrous, but sensitive, and she appears equally fragile and lonely.

Using well cast non-actors, and handheld cameras, the film sometimes has a documentary feel, although this is only a light look at the ugly and demeaning face of sex tourism.  Instead this is a sweet story, with an unusual central character who is very much the teddy bear of the title.

To describe Ginger & Rosa as Sally Potter’s most commercial film for 20 years isn’t saying a great deal.  Even Orlando (1992) wasn’t obviously the sort of material that gets the tills ringing, though it had enough selling points (costume drama, literary source material etc) to make it a reasonable success.

Potter has made a variety of films since then, many of which have been determinedly uncommercial. While that’s not a criticism, it does mean it’s something of a shock to see her name attached to relatively conventional material such as this: a coming of age story about the friendship between the two teenage girls of the title.

Born as the Hiroshima bombs brings World War II to a close, Ginger (Elle Fanning) and Rosa (Alice Englebert) grow up together.  Early scenes show them doing standard BFF stuff of the period (shrinking their jeans in the bath, etc). Ginger, a budding poet, lives in fear of the world being devastated by nuclear war – a reasonable concern, as the story takes place around the time of the Cuban missile crisis.  Inspired by her father, who was imprisoned as a conscientious objector during World War II, Ginger becomes involved in CND – unaware that she should be more concerned about the time bomb that’s ticking away at home…

Elle Fanning is superb as Ginger.  She not only does a decent English accent, she manages to play a character several years older than herself (the illusion is only broken in the close ups; she still has a child-like face). Her hurt expression as she contemplates her parents’ failings (one of the freedoms her Dad is so proud of fighting for is the freedom to sleep with his daughter’s best friend) is painful to see.

The supporting case also performs well; only Christina Hendricks is less than convincing as Ginger’s mother, and that’s due to miscasting more than anything else – it’s tough to see her in the role of the downtrodden housewife.

Though the film has a very strong sense of its time and place, the themes of friendship, growing up and fear of the future are universal. It’s a well-produced film with an exceptional lead performance, and should be the biggest Potter film not to have scenes set at Hogwarts.

Ginger & Rosa is released this Friday.