Although film and video have been a regular feature of Turner Prize exhibitions for years, it’s rare for two of the four short-listed artists to be working with moving image, and I don’t think I can remember a previous show with raked seating more akin to a cinema than a gallery space. What perhaps makes this more unusual is that, arguably, it’s the other two artists on the shortlist who are the storytellers (although one of them explicitly denies the narrative aspect of his work and the other one so totally fails to engage my attention that I’ve no way of being sure).

With the Turner Prize exhibition taking place outside London every other year it now feels like an rare treat to have the show back at Tate Britain (although admittedly this does suggest I have an appallingly short attention span: it’s only been two years after all). The treat is all the greater because Paul Noble is an artist I’ve long counted as a favourite, but had inexplicably managed to miss the Gagosian exhibition for which he was nominated. The others on the shortlist are artists whose work I know less well, although I’ve seen the work Elizabeth Price is showing before, and have enjoyed the other works that I’ve seen by Luke Fowler.

Tate Britain’s being revamped at the moment, and this year’s exhibition is in a space I don’t much like, although I’ll grudgingly concede it works well enough; that’s not to say I don’t have reservations about the exhibition but they’re more about the work than the arrangement of the space (although showing the video profiles of the artists half way through the show really didn’t work for me). The first room holds Paul Noble’s work, although initially I walked straight through his space to watch Luke Fowler’s All Divided Selves from the start so I’m saving it for later here too.

All Divided Selves is a feature-length film about psychiatrist RD Laing made from a mixture of archive film and Fowler’s own 16mm footage. Undeniably disjointed, the film works because Fowler is able to turn what could come across as chaotic and fragmented into something that seems instead multi-layered and atmospheric. Ultimately, though I found the film compelling – with both sound and image used in intriguing ways – I came away feeling I didn’t know a great deal more about Laing than I did at the start. More of an issue for me though is that it’s the archive film – which is genuinely fascinating – that really makes the film; Fowler’s footage adds atmosphere but it’s somehow not quite enough. Nonetheless there is quite a lot to think about and it’s interesting that both All Divided Selves and Elizabeth Price’s The Woolworths Choir of 1979, on view in the next gallery space, share a similar emotional narrative arc of fascination, uplift and, ultimately, dashed hopes.

The screening space is described as – and I didn’t note the actual term so may well be misremembering – a proposed structure to solve the issue of showing long film works in gallery spaces. Effectively the gallery becomes a mini-cinema with a bank of steeply-raked seating. This worked well enough, though there were annoyances: the torches used to show people in tend to cast such extreme shadows around the space that at times they become a new layer of imagery, the steps are noisy when people come and go during the screening and, frankly, the seating isn’t really comfortable enough for a 90 minute film (although it is better than most gallery seating options). And, of course, the need for something of this nature does raise the question of whether this is a gallery film at all. That it is probably says more about the film’s frustrations – the lack of coherent contextualisation and an overarching narrative – which would limit its appeal to cinema audiences than it does about art.

Elizabeth Price’s video The Woolworths Choir of 1979 is also multi-layered, but uses its inherent disjointedness to better effect – although arguably with a certain level of style over substance. Price draws on the visual language of advertising and the corporate brochure to produce something that looks at times like a PowerPoint presentation and at others like a television advert. The work is in three parts, starting with what seems like an educational presentation on the architecture of churches and the space inhabited by the choir. At this stage it’s the sound that suggests that all is not as it seems on screen, with handclaps accompanying the changing images but loudly disrupting the lesson. As this section segues into footage of singers from, I would guess, the sixties or seventies with the track suddenly up tempo and unexpectedly uplifting. This turns out to be a brief interlude before the narrative shifts and we hear about the fire in a central Manchester branch of Woolworths that killed ten people in 1979. Price uses repetition here to emphasise the shock of those who witnessed the fire take hold so totally and so speedily, coupling archive photographs with a reconstruction of the way the closely packed furniture in a storage area quickly became an inferno. I’ve watched this work several times now and though I remain in some senses baffled by the way Price has brought such seemingly disparate elements together I can’t help responding to the way the work moves from drily informative to upbeat and uplifting before smashing me back down with the shock of tragedy; along the way a narrative unfolds, and though some of the connections seem random, in many ways the story is clearer than Fowler’s tales of Laing. Whether Price’s use of the tricks of advertising and MTV wholly work I’m still not sure, but this is moving image whose place in the gallery seems much more clear cut; The Woolworths Choir of 1979 both works and feels fresh in this context. 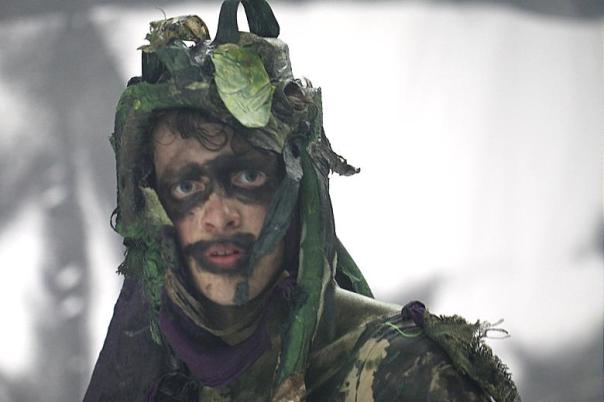 The final installation in the show is Spartacus Chetwynd’s performance space. I confess I’ve yet to see an actual Spartacus Chetwynd performance in real life, though there are a couple of her performers lolling about on a large inflatable structure (used as a slide in her Sadie Coles’ exhibition, but becoming a rather strange sofa in the Tate where it lies on its side); there are performance videos playing on monitors but though I’d happily committed 93 minutes to Luke Fowler’s film and another 20 to Elizabeth Price’s – despite already knowing the work – I found myself struggling to get through the three minutes it took to watch the first of Chetwynd’s videos and managed only a couple of minutes of a longer one which included an interview of the artist. Chetwynd has used tales from Chaucer as a starting point to explore contemporary morality – or something, I admit I wasn’t paying full attention at this stage – so there is undoubtedly a narrative element to the work but it’s one that entirely failed to get my attention, much less hold on to it for minutes at a time. For me though the biggest problem with Chetwynd’s work here is that empty performance spaces just aren’t very interesting, especially – and I speak as one who generally enjoys the crap aesthetic – ones constructed with an enthusiastic but haphazard amateurism. 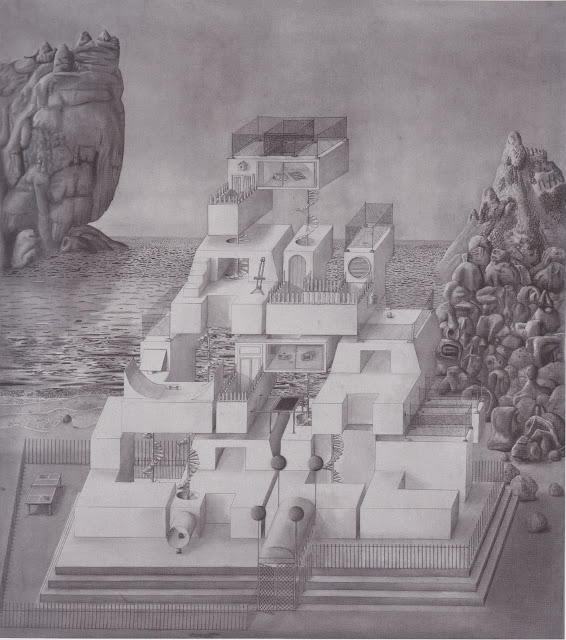 Returning to the first room in the exhibition, Paul Noble is showing drawings of his imagined Nobson Newtown, a strange and dystopian place which has been revealing itself gradually through Noble’s precise pencil drawings over the last couple of decades. I’ve loved Noble’s drawings of Nobson for as long as I can remember, and as time’s gone on his obsessive commitment to the project has only strengthened that response. But though I spent ages looking at the drawings here, enjoying unpicking the text spelled out by his letterform buildings and wondering about the weirdness of the landscape, ultimately I wanted more. In part I think it comes down to my own annoyance at missing Noble’s Gagosian show and the fact that it’s been far too long since I saw any of Nobson in real life; the various permutations of Trev and Joe’s Villa are all well and good but I’d have loved to see Nobson Central again. This was a fairly minor gripe though; what actively bothered me was the inclusion of marble sculptures. The inhabitants of Nobson Newtown, when they appear at all, are turd-like and it is they who appear here in marble. The power of Nobson lies in part in the idea of Noble tucked away in his studio for years on end painstakingly drawing out his weird world; the idea of the solitary obsessive is too embedded in this for the move into sculpture to work for me. In fairness to Noble, I’m doubtless projecting my own unfounded prejudices onto this new work but hey, I’m the audience, that’s my prerogative. 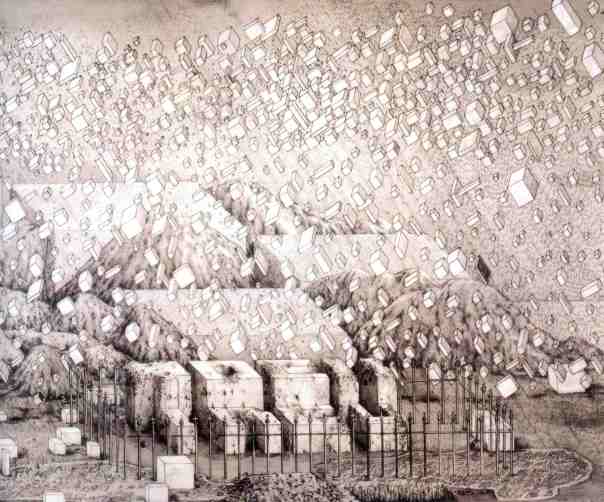 In a Turner Prize show that includes two filmmakers and a performance artist it’s perhaps surprising that the best storyteller in the show is the guy with the pencils, but for me Nobson is all about the imagined narrative. Though Noble is quoted as saying “there is no story or time in Nobson Newtown” and that he considers it to be “a play without acts or actors”, for me it is very much about the unwritten, undrawn story. It may only exist in my head, but it’s Noble’s drawings that have put it there.

So, who’s going to win? This is a prize after all, and one I generally have an opinion about, occasionally even to the extent of – successfully – putting my money where my mouth is. On balance, though my heart definitely favours Noble (albeit for the entirety of Nobson Newtown rather than for the selection of drawings and sculptures on show here), the odds on favourite, who in many ways seems clearly the best artist here, I can’t help thinking he somehow won’t quite do it. The Turner Prize is notoriously hard to predict and the decisions often seem bafflingly perverse, so in many ways Noble winning seems less like an inevitability and more like an impossible dream. All things considered, I think my money’s on Elizabeth Price, albeit only figuratively this year.