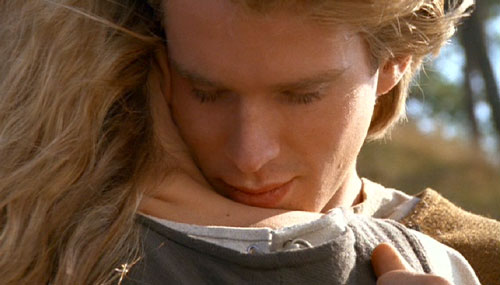 Some days all you want is a little comfort. Some days are worse than others, and a familiar film can be the perfect tonic. Some days you don’t want to be challenged by a film, you want it to lean over, give you a hug and call you ‘Champ’. We asked our contributors to tell us about films that do just that for them.

Bring Me the Head of Alfredo Garcia
by Paul Duane

Did you ever have one of those days when that big dollop of awful news you’ve been expecting finally lands on your plate, accompanied by an unasked-for side serving of catastrophe and swiftly followed by the bill, which of course you can’t even contemplate being able to pay. What’s worse, Satan’s waiter has squiggled a little happy face next to the ‘Service Charge Not Included’ bit.

When that happens to me, I know where I’m going to end up; at home, with whiskey in my glass and Bring Me the Head of Alfredo Garcia on the DVD player.

Because when the world has just shown you its hairy, scrofulous arse, there’s no better comfort than the reminder that it’s just a shark-tank where the sharks are eating themselves and each other alive and the fact that we’re all there to witness it is its only redeeming feature.

Warren Oates’ Benny, a bordello pianist wearing a clip-on tie and a desperate grin, is so completely over his head from minute one of this film that it’s a miracle he even survives til the closing scene.

His foolish determination to make money out of the one small edge he’s got (his girlfriend Elita has been unfaithful with Alfredo Garcia, so he can use her guilt to twist information out of her as to where his corpse lies) leads to one of the most awful resurrections in cinema, as he comes to in Alfredo’s grave, with the much-sought-after head missing, and Elita dead.

The road from there to the film’s end, its final shot of bullets pouring from the dead eye of an automatic weapon, is a foregone conclusion.

And I’m right there, watching it for the 400th time, as Benny proves that no matter how bad things are, they can always get worse. But if you can take it on the chin, with style, and you have a friend, even a friend who’s just a severed head in a burlap sack, well – you just might get where you’re going.

The Princess Bride
by The Tramp

“Hello. My name is Inigo Montoya. You killed my father. Prepare to die.”

Let me start by saying that I honestly believe that anyone who does not like this film is missing a very important part of their soul, because The Princess Bride is quite simply wonderful. You have adventure. You have true love. You have excellent sword fights. You have heroic heroes and dastardly villains. You have tests of strength, of endurance and of intelligence. You have a giant, a princess, a Spaniard, a Pirate and Peter Falk. You also have one of the best scripts ever, penned by the book’s author William Goldman, and in Rob Reiner’s capable hands you have a director who understands that bedtime stories can appeal to adults as well as children. Oh, and did I mention you also have ROUS? (That is rodents of an unusual size).

If you have managed to live life without seeing The Princess Bride let me summarise. A very young Fred Savage is ill. His grandfather, Peter Falk no less, reads him a bedtime story. The story is about Buttercup, a beautiful farmer’s daughter who tortures the almost mute farm boy with tasks and he just gets on with them, always after saying “As you wish.” Naturally she realises she is in love with him and he with her. Sadly for them, Westley heads off to seek his fortune at sea, where his ship is captured by the Dread Pirate Roberts who leaves no prisoners alive. And so a disconsolate Buttercup accepts the hand of Prince Humperdinck and agrees to be a Princess. Which is when she gets kidnapped by a Sicilian, a Giant and a Spaniard and the adventure begins.

There is so much to love about The Princess Bride that it is hard to know where to stop. For instance, the cast is just fantastic; Robin Wright (before she became Wright-Penn) is young and blonde and lovely as Buttercup. Cary Elwes is the very image of Errol Flynn as Westley. Andre the Giant is unbelievably lovable as Fezzik the giant. Mandy Patinkin is swarthy and svelte as the Spaniard (trust me if you loved him in Homeland or Criminal Minds and have never seen TPB it is worth watching for his role as Inigo alone). Chris Sarandon is a fabulously oily Prince Humperdinck and Christopher Guest is practically unrecognisable as Count Tyrone Rugen. And then there is Peter Cook as a Clergyman, Mel Smith as a hunchback albino, Billy Crystal as Miracle Max, Wallace Shawn as Vizzini and did I mention Peter Falk as the grandfather?!

Oh, have I said how quotable this film is yet? Or that it has the single greatest sword fight in any film since Basil Rathbone’s Sheriff of Nottingham battled with Flynn’s Robin Hood? Or that it features a hero storming a castle in a wheelbarrow – successfully? No, well I really should.

I could tell you more about The Princess Bride, but to do so would ruin the film. Suffice to say that no matter what age you are when you watch this (if you have all of your soul intact) you will fall in love with it, you will find yourself quoting it forever more and connecting with other people who can and will quote it forever more, and you will, I promise you, watch it again and again, particularly when your heart needs warming.

2001 was the first film I watched this year, and probably the film I watch more than any other. And although part of the reason for starting the year with it was to cleanse the palate in the middle of prestige pudding season, I’d be lying if I said I was watching it at least once a year so I could reconsider its metaphysical musings anew each time. There are many classic films that I love as much, and enjoy watching as much, that I’m perfectly happy to see maybe once every ten years.

The way I keep coming back to Kubrick’s masterpiece has, if I’m honest, more in common with the way I can watch Zoolander or Anchorman a seemingly infinite number of times, or the way, when I first bought a DVD player, that I would keep cueing up not even specific scenes but specific *shots* from The Matrix – that rain of shell casings falling from the helicopter, that moment Neo sees the Matrix. Not that 2001 is a comedy (although, come on, the zero G toilet gag!) or an action film, but it’s all about the moments, and the predictability. I know to the second how the concluding stargate sequence plays out, and even writing this is making me want to put it on again.

Maybe it’s the unwitting comedy of the pre-match briefing, with real footballers and a real manager (George Allison), dressed in suits, smoking like chimneys and moving counters around a Subbuteo pitch. Or maybe it’s Leslie Banks as Inspector Slade, a man driven by the need to solve the case before the curtain goes up on his beloved Police Revue, but The Arsenal Stadium Mystery is my ideal comfort film.

The plot takes in adultery, murder, suicide, burglary and two proper football matches in around the time it takes to watch a modern match. Unlike many football films, the on-pitch action is taken from footage of an actual football match between Arsenal and Brentford, with Brentford playing for the amateur side.

The star player for the Trojans, an amateur football squad, collapses during a charity match, and Inspector Slade of Scotland Yard is called away from directing the police revue to investigate the murder. Slade’s methods are unorthodox and of questionable legality, even in 1939, but his ingenious combination of burglary and inspired deduction uncovers adulterous affairs, sinister goings-on in basement laboratories, and poisonous off-pitch rivalries among the amateur side. Arsenal, by comparison, are quite boringly professional, and seem to spend their time smoking pipes and discussing tactics.

The film moves at a cracking pace, giving you barely a minute to draw breath between the first match and the on-pitch climax. Even the characters don’t seem to have much time for reflection. A suspect is surprisingly equable about finding eccentrically behatted coppers blundering around his cellar. The suicide’s fiance is grief-stricken for about five minutes before consoling himself with her pretty Danish flatmate.  At times, it’s reminiscent of a Harry Enfield sketch ( Mr Cholmondley-Warner on Association Football), and the combination of proper footballers and a melodramatic plot shouldn’t work, but the whole somehow has a peculiar charm that leaves me grinning like a loon, whatever my mood.

The Breakfast Club
by MrMoth

Ideally, this would be me talking for 2,500 words on Brek, but here we are. It’s quite simply the best film ever made, don’t argue. It is perfect in every single regard, shut up I can’t hear you. OK, OK, I will rein it in a bit. If you saw The Breakfast Club at exactly the right age and in exactly the right frame of mind, it is a perfect film, and where it once felt vital, like a hymn to my youth, it now feels like a log cabin built of warm nostalgia.

The situation is genius – five (suspiciously grown-up) kids, all representing various school tribes, are locked in a room for an entire day and forced to come to terms with their differences and their similarities. They bond, they fight, they quip, they get high, they go low, they dance, they spar, they fall in love, they make a lasting impression on each other. It has absolutely everything. Also Molly Ringwald.

It’s ridiculously quotable – ‘I’m being honest, asshole, I would expect you to know the difference.’ ‘The next screw that falls out will be you.’ ‘Speak for yourself’ – ‘You think I’d speak for you? I don’t even know your language.’ ‘ I don’t have to runaway and live in the street. I can runaway and I can go to the ocean, I can go to the country, I can go to the mountains. I could go to Israel, Africa…. Afghanistan.’ ALL OF THESE ARE BRILLIANT LINES. John Hughes was amazing at writing pithy lines no teenager could come up with but every teenager would want to say. And it opens with a Bowie quote, white on black, that fractures like smashing glass. Jesus, what more do you want?

The thing is, if you weren’t the right age it’s just a bunch of stereotypes smart-alecking at each other for 90 minutes and coming across as a bunch of whiny fucking brats. I can see that. Of course I can. But I don’t care, because it’s perfect.

5 thoughts on “Chicken Soup for the Cineaste”