Indy Datta braves two of the year’s worst reviewed films in one weekend. 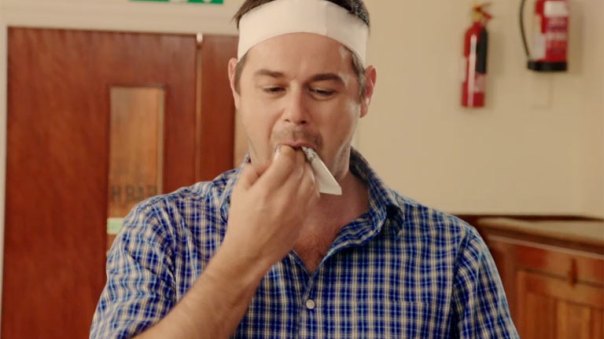 The possibly mythical regular reader of MostlyFilm may remember that your correspondent has previously expressed a certain fondness for the runts of the cinematic litter: the shitty Britcoms raised on a diet of tax breaks and broken biscuits,  then barely released to the profound indifference of audiences everywhere, to the extent that one screening in a windblown suburban Cineworld before a chastened retreat to DVD can be accurately described as “everywhere”. Imagine my joy, then, when the review the editor had penciled in for me for today (Cloud Atlas, narrow-escape fans)  fell through, leaving him with a slot to fill and me with an excuse to see the latest Danny Dyer vehicle, Run For Your Wife.

Except it turns out that an excuse is not necessarily an opportunity. Ray Cooney’s own adaptation of his hit stage play, which ran in the West End for 9 years in the 80s (although my only memory of it -possibly false – is of those continuity announcements in the end credits of Perry/Croft sitcoms  on the BBC that informed the audience where the actors They Had Been Watching were currently treading the boards: Vicki Michelle is currently appearing in Run For Your Wife at the Theatre Royal Haymarket ; Gorden Kaye is currently showing his Bottom in A Midsummer Night’s Dream at the Ilford Coliseum)  is playing on a scant handful of screens in London, few of them even vaguely central. And it’s playing once per screen. On weekday mornings. Luckily, the film’s PR company rode to the rescue with a DVD screener, and my Friday evening viewing was sorted.

Run For Your Wife arrived trailing a cloud of critical derision, and while it would be nice to report that it’s better than you’ve heard, it would also be nice if Beyoncé was my girlfriend. A lot of the blame lies with the source play – an extraordinarily dated sex farce about a London cabbie (Dyer, in loveable cockney  lummox mode rather than shank-wielding pwopah nawty mode) in danger of being unmasked as a bigamist – which, for example,  finds the very idea of homosexual men (like the neighbours played with the gay turned up to 11 by Lionel Blair and Christopher Biggins) inherently so hilarious that actual jokes  on said ostensibly comedic subject are deemed surplus to requirements.  Watching the film, it’s hard not to wonder how material so thin and artless could have ever have been so successful, but it’s also possible to see how clever staging and crack comic timing could maximize whatever comedic potential  the text possesses.

Sadly, Cooney’s prowess as a film director (and/or that of his “co-director”, John Luton, previously best known for writing the urban thriller Dead Man Running, “famously” “executive produced” by  Rio Ferdinand and Ashley Cole) lags some way behind his skill as a writer, and what needed to be tightly choreographed and precisely performed is slack and amateurish in every department. Much of the action is set in the two flats in which Dyer’s character has set up home with his wives (Denise van Outen, and Sarah Harding out of Girls Aloud) and those of his respective neighbours, and appears to have been filmed in real flats rather than on sets – a decision which would have made achieving the necessary control of space and staging taxing for far more accomplished directors than Cooney, who usually seems literally cornered into placing the camera in the only place it can go to capture the action, making the film look at times like a home movie, an impression only exacerbated by the flat, overlit look achieved by cinematographer Graham Fowler. According to the IMDB, this is a two and a quarter million pound film (shot with the same cameras they used to make Skyfall and Life of Pi): I’ve seen better-looking quarter-million pound films.

Despite the film’s stage heritage, the acting isn’t any better. Old pros like Dyer and Neil Morrissey (as Dyer’s layabout neighbor) just about escape with their dignity intact, if not their trousers, but van Outen is stranded, playing crudely and charmlessly to the back row,  and poor old Sarah Harding out of Girls Aloud is humiliatingly unwatchable: having none of the technical or emotional resources of an actor, she simply shouldn’t ever have been put in this position.

I could bang on for ages about everything Run For Your Wife does wrong, like the running gag about the cabbie who spends the day running up an extortionate fare by ferrying Dyer back and forth between his two flats, which apparently doesn’t merit any kind of payoff or punchline; or the endless parade of British theatre, television, light entertainment and variety stars of (mostly) yesteryear in  a succession of bafflingly pointless cameos – as one wag pointed out on the YouTube page for the film’s official trailer, if Judi Dench dies tomorrow, this will have been her last film: but here’s the thing. Run For Your Wife was not the worst film I saw on Friday, because, after I picked up the screener, I paid for a ticket to see A Good Day to Die Hard. 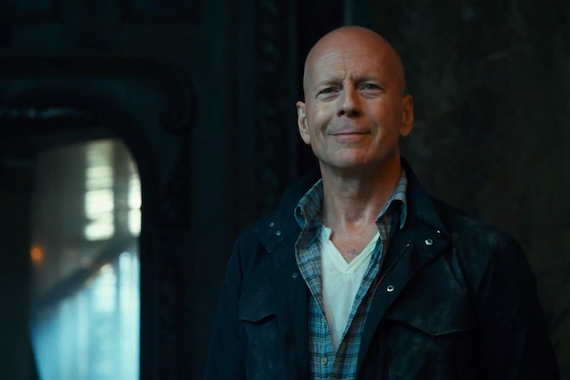 Oh, sure, the Die Hard movie looks a lot more expensive, with its ridiculous teal and tangerine grade, smeared with fake grain, its helicopter shots of the Moscow skyline, its flash cars and flashier women – but its crudely written nonsense plot is nothing more than a vehicle to deliver a numbing series of CGI-pumped action sequences, which would be fine if any of them made any narrative, emotional or spatial sense; which they don’t. Hollywood veteran John Moore’s direction of the film as a whole, but particularly of these sequences, is easily as incompetent as Cooney and Luton’s marshaling of the debaggings and slamming doors of Run For Your Wife, but because Fox have the market power to ram the film down audiences’ throats and make them like it, he’ll probably be rewarded with a further sequel he can fuck up even worse.

Not that I can see how it can get worse than this. John McTiernan’s original Die Hard, in which John McClane’s blue-collar American everyman character prevailed over a gallery of effete Euro-villains through guts and brains and luck more than brawn and firepower, was the film that made Willis a global superstar, and part of the reason was the everyman thing – this was an ordinary American man kicking asses and taking names, not a steroidal freak with a funny accent like Arnie or Sly. McClane’s ostensible normality and working class lack of airs and graces were an essential counterpoint to (or sweetener for) the film’s essentially reactionary ideology. These nuances have been progressively stripped from the film’s sequels, while Willis has become fully-assimilated into the Stallone/Schwarzenegger axis of action film-making, with a musclebound series of essentially indistinguishable characterisations (save for the exact calibration of the extent of Willis’ empty smirk) in the sequels but also in films like Red (also, for some reason, about to get a sequel) and the Expendables films. In A Good Day to Die Hard, the series’ right-wing politics have been distilled to McClane and his son (CIA agent John McClane Jr, seriously (off-the-shelf Aussie beefcake Jai Courtney )) as ugly American abroad caricatures trading one-liners about making the world better by “killing (effete European) scumbags”. The close-cropped haircut that Willis sports in this (as in the last Die Hard film, Len Wiseman’s brutally bland Die Hard 4.0, which I thought would be the worst Bruce Willis film I ever saw until now) makes him look, basically, like a wise-cracking homicidal glans.

Initial reports are that this latest Die Hard film has already grossed a respectable 32 million dollars in the US, and given the number of screens it was booked onto in the UK (there’s the crap you can’t see if you want to, and then there’s the crap you can’t avoid), it seems safe to assume that it will have coined it here too. Although critics have more or less universally lambasted the film, the audience rating on Rotten Tomatoes at the time of writing is 82% positive. The Die Hard brand and Fox’s market power are strong enough that people don’t seem to care if what they’re served is chateaubriand or pit pony. And I’m fairly sure that nobody involved in the making of the film, from Willis (who , to be fair to him, still finds time to make films like Looper and Moonrise Kingdom) to Moore to the Dirty Digger himself, gives a fuck either, as long as they get paid.

The one thing you have to say for Cooney’s film, on the other hand, is that surely nobody did it for the money. If they did, they were clinically delusional (which, actually, would be the diagnosis occasioned by the end credit promise of a sequel), and either way it seems that the film deserves some of the audience support that goes by default to the no better Die Hard movie. So go on, bunk off work next week and make a morning trip to your local Odeon and join the blue rinse crowd in reliving the entertainment of their youth. You won’t regret it. Okay, you will, but not as much as you’ll regret seeing the posters go up all over town for Die Hard 6 in a couple of years.

Bruce Willis is currently appearing in “A Bit of an Animal: the Talking Pepperami Musical” at the Donmar Warehouse.