We’ve been here before on Mostly Film, looking at the way moving image works are shown in the gallery space, but maybe, just maybe, it’s something that warrants revisiting from time to time because there is no one right way. And there’s always the chance that this will turn out to be about something else after all.

Anyway, what’s got me thinking about screen art in the gallery again is a combination of seeing Gerard Byrne’s A state of neutral pleasure at the Whitechapel Gallery recently and a nagging sense of guilt about not having written about Gillian Wearing’s show in the same space. The exhibitions are very different but among the things they share are a blurring of the boundaries between fact and fiction through the use of restaging, a sense of the televisual and an unusual approach to bringing moving image work to the screen. 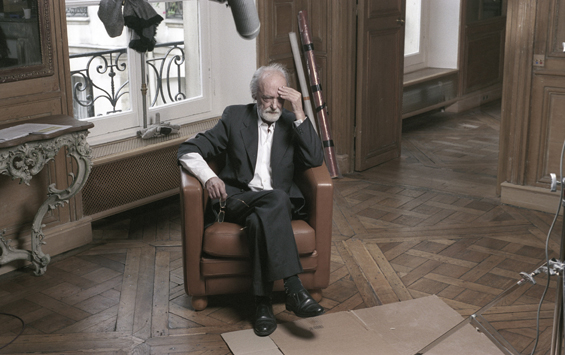 The Whitechapel Gallery has had a great couple of years particularly in terms of shows of photography and moving image; the exhibitions by Wearing and Byrne feature both. Though this curatorial success has largely been down to the work on show, the way it’s been exhibited has made a difference. In the case of both the Gerard Byrne and Gillian Wearing shows, the way the viewer experiences different works is crucial to their success or otherwise. Wearing’s confessional pieces, effectively a form of video diary, demand a one to one relationship with the viewer; other works, though not exactly cinematic, are better seen as a shared experience. Arguably this is less true of Byrne’s work, but nonetheless the use of the small screen for some works is deliberate and effective not least because much of Byrne’s work has a closer relationship with television than with film.

It’s this relationship with television that interests me here. Artists’ film and video is often influenced by film; television is less common as a reference point but it’s clear in the work of Byrne and Wearing. Works such as Confess All On Video. Don’t Worry, You Will Be In Disguise. Intrigued? Call Gillian…, the first of Wearing’s confessional videos, made in 1994 and shown in a booth in an upstairs space at the Whitechapel, seem to presage the fascination with the lives of others that drives reality television though Wearing affords her subjects an anonymity not extended to Big Brother housemates. The confessions offer what may or may not be true life stories; that it’s impossible to know the degree to which the confessions are factual is part of what makes the work so compelling. The stories are often moving and sometimes shocking; whether the sometimes unbearable sadness is made harder or easier to contemplate by the chance that there may be an element of exaggeration – or even fantasy – is something I struggle to decide. Either way, Confess All and its companion pieces Trauma (2000) and Secrets and Lies (2009) are works I find it hard to tear myself away from. These are works that need undivided attention and the booths they were shown in at the Whitechapel created the right environment. On occasions I found myself squashed in with a stranger (needs must when an exhibition is close to closing), lessening the intensity of the experience.

For Gerard Byrne’s A neutral state of pleasure, the video works in the main upstairs gallery are shown on televisions with headphones. Though each screen has two chairs, donning headphones puts me in a solo relationship with the work. The works here have a clear truth but it’s veiled by Byrne’s strategy of getting actors to restage conversations from essentially unedited transcripts. Of the works here, New sexual lifestyles (2003) makes for often uncomfortable viewing. The work is a restaging of an often outrageously sexist 1973 conversation for Playboy magazine between key figures in the sexual revolution of the time. Easier, and for my money more entertaining, to watch is 1984 and beyond (2005-7), a 1963 conversation between sci-fi authors about the future, again for Playboy (maybe people really did buy it for the articles); that Byrne has used Dutch actors to voice the likes of Ray Bradbury and Arthur C Clarke makes the piece somewhat disorientating. In another work – Why it’s time for Imperial, again – Byrne casts rather non-descript actors as Frank Sinatra and Chrysler chairman Lee Iacocca for a restaging of an advertorial for the Chrysler Imperial which appeared in National Geographic in 1980. In all these works, Byrne is reanimating discussions that previously appeared in print; though the conversations took place the printed transcripts themselves represent a kind of fiction: though the actors are working from unedited transcripts, we have no way of knowing what may have been lost in the original magazine edit.

Working with actors rather than Wearing’s approach of working with random strangers ties Byrne’s work more directly to film or television drama. But in conversation with curator Kirsty Ogg at the Whitechapel, Byrne describes his approach as seeing acting as a tool rather than an art form. The artist also, on occasion at least, removes himself from the process of recording the re-enactment: for his 2012 work A man and a woman make love he commissioned a television company to make the piece.

In both exhibitions, it’s the experience of watching the smaller scale screens in the upstairs gallery that I find most affecting but in both it’s the way larger scale projections are installed in the ground floor space that is more interesting in terms of display. In both exhibitions, these are works which benefit from being viewed with others, or at least aren’t compromised by it. An unsuspecting visitor to either exhibition might conclude they are entering an exhibition of installation art. In reality the space is occupied by sculptural projection screens in Byrne’s case and small shed-like projection spaces in Wearing’s. In both shows there are several films on show in the space but whereas in the Wearing exhibition each has its own space and the audience wanders from space to space watching a different work in each, in Byrne’s show the films are screened at set times across multiple screens. Here the audience shifts as the action moves from screen to screen.

As the first space one encounters when entering the gallery, this is the space that generally sets the mood of shows at the Whitechapel and it’s here that I was won over by the Gillian Wearing exhibition. From seeing Dancing in Peckham on a small monitor suspended from the ceiling to watching works like Sacha and Mum, 2 into 1 and Bully I’m reminded how much I like Wearing’s work and, more importantly, am struck by quite how well her practice hangs together as a body of work for all its inconsistencies. Wearing’s on-going exploration of public and private personae and her take on portraiture in a media age gives me a lot to think about. Walking between the various rooms with a room watching Wearing’s videos – many of which I haven’t seen for many years – is somehow more cheering than the subject matter suggests it should be.

Gerard Byrne’s work inhabits the space in a very different way. The minimal white slabs that act as screens divide the space forcefully meaning that the means by which the work becomes visible also act as a bar to accessing it. Images appear on different screens at different times – sometimes one, sometimes several – and while it’s possible to see multiple screens at once it’s not possible to see them all simultaneously so the audience roams in a way one wouldn’t expect given the length of the films (the longest is 65 minutes). I confess I haven’t seen all the works on show here – indeed, I don’t think I’ve seen any in its entirety – but this is down to bad timing on my part; I certainly hope to make another, better planned, visit to the exhibition. From what I have seen – and from works of Byrne’s I’ve seen before and the pieces on show upstairs – this is a show I want to see properly. Byrne’s most recent film, A man and a woman make love, is a multi-screen re-enactment of a 1928 Surrealist group discussion about sexuality; the work was made as a live performance for television cameras and at times the audience, and cameras, are visible.

Byrne offers an intriguing version of history and cultural memory. His reanimations have an authenticity in word if not in image. The artifice is never far from the surface, indeed in A man and a woman make love the visible presence of audience and cameras mean it disrupts the surface as a frequent reminder of the pretence. The need to shift position within the space to see the work exaggerates this so that what could feel like an annoyance becomes an integral part of the work. All of which perhaps says little about the nature of film in the gallery space, but it does confirm – for me at least – that a gimmick isn’t really a gimmick if it works.

Gerard Byrne: A state of neutral pleasure is at the Whitechapel Gallery until 8 March 2013. Gillian Wearing’s exhibition took place there from March to June 2012.