Ah, Easter! Who among us does not, at this time of year, find their mind turning to thoughts of resurrection? To things which are lost and which, one day, might see the light of day once more? Inspired by such musings, several MostlyFilm contributors have, as they have time and again, written about those forgotten films and telly programmes which, having once been crucified on the crucifix of obscurity, we would like to see rise once more from the cave of time. Come with us now, as we roll back the stone of memory and share with you, our disciples, these cinematic and televisual miracles.

After the relative box office flop of Explorers, Joe Dante pottered about for a bit with telly then returned to cinemas with Criminals! in 1986. Sadly, it was another turkey for Dante, whose box-office Midas touch seemed to be failing him, and has been completely forgotten in the light of his magnificent return to Hollywood golden boy with Innerspace. This is a real shame, as Criminals! is a cracker of a film.

The story is almost immaterial – River Phoenix’s Oliver Twist-like Paulie is dragged into a series of bank robberies with a group of pint-sized recidivists and, through an unlikely series of coincidences, ends up both very rich and utterly untouchable – because it’s all about the journey.

Criminals! plays like a send-up of every crime caper you’ve ever seen, making vast quantities of hay from the mismatch of the age of the criminals and their chosen activities. The young cast (including a very early appearance from Macaulay Culkin as a wisecracking lookout with about three lines – all brilliant) are pretty much uniformly excellent and never cloying. Once they all get out on the road in their amazing vintage Chevrolet, bickering, playing games, shooting up banks, eating literal hats (uh, spoiler) it’s just the most anarchically great thing in cinema outside of, well, Gremlins.

MY ESTONIAN BUTLER
by Spank the Monkey

Sportspeople are the same the world over: never content with excellence in their chosen field, they feel they’re entitled to be movie stars as well. One of the more recent examples of the trend is Kaido Höövelson, an Estonian sumo wrestler who’s been charming the socks off fans of the sport for the last decade or so under the name Baruto. The Japanese, delightfully, keep insisting that he’s a dead ringer for Leonardo diCaprio so maybe it was always a given that he would take time out to go into the movies himself.

My Estonian Butler centres on the once-wealthy Shigatsu family, who’ve fallen on hard times but desperately need to keep up appearances. They’re forced to sack their domestic staff, and hire an Eastern European immigrant – Bart Lõhmus, played by Baruto – as cheap labour. Initially they’re shocked by his unfamiliarity with Japanese etiquette, not to mention his healthy appetite. Their youngest son Ichi is particularly appalled, as his classmates tease him for being driven to school in Bart’s beaten-up Trabant. But gradually, the two of them grow to tolerate each others’ foibles.

It’s a familiar formula, to be sure: contrast a musclebound hero with the antics of a small, fantastically annoying child. That familiarity probably reduced Butler’s chances of ever being seen outside Japan, unless you were quick off the mark during its limited domestic DVD release. But Baruto’s bemused smile carries him a long way in the early part of the film, showing he’s got a surprising knack for comedy. Still, you wouldn’t expect his first movie role to avoid his other career completely: so when Ichi Shigatsu is kidnapped by yakuza in the third act, we know Bart will be ready to strip down to his pants and give those gangsters the slapping they deserve. Just because it’s familiar, that doesn’t mean it can’t be entertaining as hell.

OUR REPRESENTATIVE WILL CALL
by Paul Duane

When future Italian Job director Peter Collinson took up a position as drama director in the new Irish TV station Teilefís Eireann in 1962, one of his first productions was a full-on attempt to re-create Orson Welles’ War of the Worlds radio broadcast for the flickering black-and-white screens of the youthful Irish nation.

Titled, innocuously enough, Our Representative Will Call, it was a live studio broadcast, with all the creakiness that entailed. However, Collinson ingeniously contrived to break into the inane studio chatter with what seemed to the unsophisticated viewing public of 1962 to be genuine breaking news broadcasts from the site of a crashed meteorite in the Dublin Mountains.

Presenter Erskine Fuller found his scheduled programme interrupted by future newscaster Charles Mitchell, a one-man Mount Rushmore, lending his considerable gravitas to the unfolding story as he communicated to the increasingly panicky studio guests that the meteorite seemed to be disgorging strange alien forms.

The inherent analogue fuzziness of the transmissions lent a disturbing air to proceedings, and the ever-present paranoia of a country only just recovering from its self-imposed isolation from the rest of the world during WW2 was tapped into expertly by the (some say, highly sadistic and manipulative) Collinson.

The finale, where some nameless Lovecraftian horror emanated from the crater to overpower first the outside broadcast team, and then the studio team – as if the contagion spread by means of television itself -seems to have terrified everyone who saw it, though none could really describe what exactly it was they’d seen.

The film was repeated only once, apparently by accident, during test transmissions for the second Irish station, Network 2, in the early ’80s. That’s when I saw it – a bored rural teenager, my only occupation in the summer afternoons was messing with the television tuner in the hope I’d find something unexpected. That afternoon, I was rewarded. A ghostly transmission never meant to be seen, fuzzily fading in and out, like something out of Videodrome. I can’t really describe it. I’ve never met anyone else who saw it. No tape exists, at least none that I have been able to trace. Perhaps that’s just as well. Nobody associated with this broadcast seems to have thrived thereafter. Mitchell’s career took a serious knock from the prank, and he refused to speak about it ever after or clarify how the finale was achieved. Collinson died young, taking the secret alchemy of his strange TV experiment with him.

THE BOYS FROM HOODS END
by Blake Backlash

Only in Britain, and maybe only in the sixties, could someone make a film as equally influenced by debates about post-war housing policy as it is by Warner Brothers gangster pictures. During the opening credits of The Boys From Hoods End our ten-year old protagonist, Trevor Styles, watches an inner-city Manchester tenement, very like the one he lives in with his mother, being demolished. Shortly after this his Mum sends him to live with his Dad, an embittered former shop-steward known as ‘Narky’ Jack Styles, in the housing estate of Hoods End. When he gets to Hoods End, Trevor is reunited with two of his best friends, brothers Ricky and Darren Baker. It is this friendship that will lead Trev into the world of two rival gang-leaders, Franks Cripps and Barry Blutts.

The film’s director, Eglinton St John, said he wanted the title to evoke ‘the demise of the idea of Robin Hood, of a fair share for everyone, and of an older English way of life’. But something goes wrong with the film’s politics. Narky has a big speech about how in Hoods End ‘folk have still got nowt, cept all the same problems, and some new uns… but now, them that runs the show has us all in one place, hid out t’way’. But nothing in the film is as powerful as the nightmarish scenes in the slum tenement at the start. And St John seems so fascinated with modernist architecture that he ends up making Hoods End look beautifully serene. 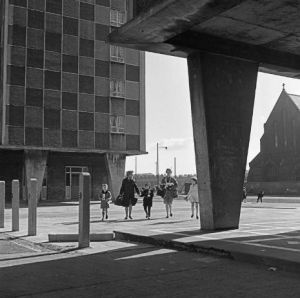 That may be St John’s achilles-heel. His ability to make things look good overwhelms his politics. There’s a great scene where Trev and Darren, having been drawn into the Cripps vs Blutts gang-war, are chased through a surreal twilight landscape of backstreets, allotments and canals. The sequence ends with a brutal bit of editing that lets us know Darren has been stabbed. St John follows this with a terrible, overwrought scene in which Darren’s mother gets the news of his death, just as she is opening a letter telling her that Darren has passed his eleven-plus. St John’s ability to pull-off a set-piece shows up how inept he is at handling political themes.

And therein lies the rub… St John went onto to profit from his undeniable technical know-how, first serving as second-unit director on some seventies disaster movies, then as a producer for Fox in the eighties. When Fox acquired the back-catalogue of Remus Pictures, the British studio that released The Boys From Hoods End, St John seems to have tried to ensure it never got a VHS or DVD release (my Dad recorded it on some drizzly, black-and-white, BBC2 bank-holiday afternoon). Perhaps, like some merchant banker’s passport photograph from his student days, the film was a painful reminder to St John of the politics he gave up, lost somewhere in Los-Angeles. He died on the 12th of July, 1991 from liver-failure but the film still has not been re-released.

After Ballykissangel and before Wild at Heart, smallscreen stalwart Stephen Tompkinson earned his crust in various TV mini-series, the best of which is undoubtedly this long-lost post-Watershed three-parter that aired on ITV 1 in 2002.
Similar to future shows Marchlands and Lightfields (right down to the geo-specific title), Shadowlake dabbled in the supernatural, and the premise, laid down in the first sixty-minute episode, could have come straight from M Night Shyamalan’s pile of unproduced scripts: Martin Challinor (Tompkinson), still blaming himself for the car crash that left his wife (pre-Coronation Street Alison King) and 10-year-old daughter (Mary Marsh) dead, relocates to a quiet village in the Lake District, only to discover a single mum and young girl who look just like them. Is Challinor going mad, or is something more sinister afoot in Shadowlake’s chocolate box community?

The following two episodes were masterful, with Tompkinson giving an early career highlight portraying a man teetering on the edge of insanity, and only bettered by Richard Wilson’s creepy turn as a vicar who knows more than he’s letting on. In fact, Shadowlake as a whole was genuinely scary, with a tension-building score (think John Carpenter’s The Thing), eerie cinematography (think The Others) and a labyrinthine plot that remained unpredictable until the final revelatory scene.

Unfortunately, as the result of an unusual co-production deal between BBC America and Granada Television, Shadowlake has never been repeated in the UK since its first run, and a home media release appears unlikely. Look out for it, though, if you’re ever stuck in a motel in the US and fancy some scares.