Harold Pinter wrote The Hothouse in 1958. He then discarded the play and it remained out of sight for over two decades, before Pinter himself directed its premiere at the Hampstead Theatre in 1980. “I have occasionally out of irritation thought about writing a play with a satirical point. I once did, actually, a play that no-one knows about. A full-length play written after The Caretaker,” he told an interviewer in the early ’70s. “Wrote the whole damn thing in three drafts. It was called The Hothouse and was about an institution in which patients were kept: all that was presented was the hierarchy, the people who ran the institution. One never knew what happened to the patients or what they were there for or who they were. It was heavily satirical and it was quite useless.”

Despite Pinter’s protestations about its substandard quality, The Hothouse was a success in its initial run and was acclaimed again when it was revived in 2007. Now the play is back in London, with Jamie Lloyd directing a new production at the Trafalgar Theatre, and it gives audiences another valuable opportunity to catch up with this still underrepresented work. What might take some viewers by surprise is how broadly comic much of The Hothouse is, perhaps being partly inspired by some of the revue sketches he was writing around that time. In fact, the opening scene of the play unfolds in the manner of a classic sitcom.

It’s Christmas Day in a mysterious institution, the true purpose of which is never made clear. All we know is that people are assigned for rehabilitation there under the instruction of “The Ministry,” they are referred to only by a number, and it’s all under the dubious management of a man named Roote (Simon Russell Beale). Roote is a Mainwaring-like creation, pompous and officious but increasingly exasperated as events spiral out of his control, and he spends much of the play in discussion with Gibbs (John Simm), his obsequious and conniving second-in-command. They have two big problems to deal with on this festive morning. Patient 6457 has died in mysterious circumstances while 6459 has given birth, having apparently “had relations” with most of the staff. An apoplectic Roote orders Gibbs to investigate, but this whodunit aspect of the story is only a device that Pinter uses to explore the absurdities of bureaucracy and the corruption inherent in unchecked power. 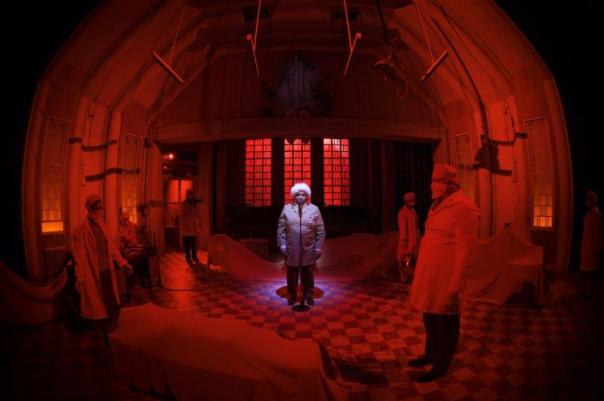 The back-and-forth between Roote and Gibbs, as they wade through confusion and attempt to ascertain what exactly has occurred under their noses, sets the tone for much of The Hothouse. The dialogue is rapidly delivered, with the actors being perfectly attuned to each other’s rhythms, and much of it is hilarious, particularly Pinter’s use of repetition which builds to some big laughs. Jamie Lloyd has already directed three of Pinter’s plays and he attacks this material with refreshing confidence. The grey and sickly-green paint peeling from the walls and the threadbare furnishings perfectly evoke the atmosphere of a grim, stagnant institution, and the staging allows Lloyd to switch between the play’s two key locations – Roote’s office and a staff room – with simple lighting cues (although positioning some audience members on stage is an odd, and distracting, move). He also does a capable job of handling the play’s breakneck tonal shifts, notably an interrogation scene at the end of Act I that provokes laughter before veering into extremely disturbing territory. However, even he struggles with some of the awkward developments in the play’s second half.

The Hothouse packs a lot into its second act, but not all of it fits smoothly. The manipulations and murderous instincts displayed by some its characters are abruptly brought into the plot and don’t feel fully developed, while some of the timing doesn’t feel as sharp. When John Heffernan, playing the caddish Lush, has finished delivering a breathless monologue about his encounter with one patient’s mother, he pauses as if anticipating an applause that doesn’t come, and such brief moments of stiltedness are particularly noticeable after such a fleet and efficient first hour. The other challenge Lloyd faces as the play nears its climax is to escalate things to a fevered pitch without pushing things too far. He just about pulls it off, aided by the fact that Simon Russell Beale’s performance really comes into its own in these moments, with his red-faced bewilderment and aptitude for physical comedy serving up some priceless moments.

Pinter suggested that his problematic characters were one of the reasons behind The Hothouse being shelved for 22 years: “I never began to like any of the characters, they really didn’t live at all. So I discarded the play at once. The characters were so purely cardboard. I was intentionally – for the only time, I think – trying to make a point, an explicit point, that these were nasty people and I disapproved of them.” One can certainly empathise with that point of view, as they’re not a particularly likeable bunch. Pinter paints these bureaucratic figures as cruel, devious, naïve, incompetent or all of the above, but the actors and Lloyd work hard to give them human dimensions. Roote’s recollection of the Christmases he used to enjoy once upon a time lends his blustering performance a vital note of pathos, while Harry Melling’s turn as nervous chatterbox Lamb possesses an enthusiastic sweetness that is enormously endearing.

The Hothouse is a distinctive, unusual, occasionally discordant play. It is simultaneously vague enough in its details to work as an allegory for any contemporary issues of state control that you care to mention, while being tight enough to work as a madcap dark comedy. The strain that Pinter seemed all too aware of in 1958 is still evident at times, but this is a sharp, gripping and enormously entertaining production that skilfully walks a fine line between slapstick humour and abject horror. The Hothouse is a play that will frequently have you in hysterics, but every now and then it will make that laughter catch in your throat as you hear screams and moans of anguish echoing through the walls.

The Hothouse is at Trafalgar Studios until August 3rd.