Last week saw the release of Grand Theft Auto V. A month before that, a smaller fanfare heralded the release of Saints Row IV. Mr Moth talks about why the former may not outclass the latter. 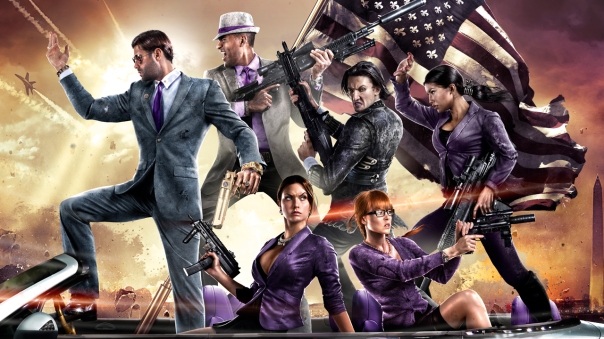 I know what you’re thinking – “You’re blathering, Moth, creating an ominous philosophical generalisation into which you’re attempting to gather the whole of society simply for existing at the same time as a tinpot piece of cultural flotsam that matters only to a relatively small section of society!” To which I say – Well, yeah, a bit, but I’m going somewhere with this. Also, now that we’ve established that I can read your mind, maybe you’d better keep your thoughts nice while I talk, eh?

I, of course, do not mean own it in a physical sense. It is a product of our society and we are shaped, even if only in a tiny way, by its impact. It’s a feedback loop. Other games shift more units (Jesus, Call of Duty outsells pretty much anything ever – if they ever made a film adaptation it would actually be less profitable than the game), have more recognisable characters (Mario is pushing for the recognisability of Mickey Mouse) and certainly have more intricately-woven stories (Hi Bioshock!) – but GTA is the public face of gaming. It is the Daily Mail’s favourite game, and The Guardian’s, for totally different reasons.

Because of this, it is also its own favourite game. It loves to taunt the tabloids with sensationalism and challenge the broadsheets with its own tastelessness. The already-infamous torture mission of GTA V has the liberal press squirming in its seat as it attempts to enjoy that which it specifically condemns. Meanwhile, those who wallow in the gutter press quack on yet again about killing a prostitute to make one’s money back. That feature isn’t going anywhere because why would they want to make themselves less notorious? And we expect it to be there.

For all that GTA IV went for a dour, grittier tone than previous instalments, removing the fourth-wall-breaking rampages and concentrating on Niko as a damaged, brutal antihero in a world without pity it was still that game where you killed prostitutes after shagging them. It still revelled in its own horror, because that is what Rockstar do best – they know it, we know it and they give it to us because we expect it. That’s a basic cultural contract, and an economic one of supply and demand.

But they didn’t need to do this. With an audience as enormous as the one Grand Theft Auto has accrued, they had quite a bit of creative freedom, and they did try to use it. The attempt to re-frame the series with GTA IV’s ‘Eastern European Godfather Part II’ vibe appeared bold but, as MostlyFilm has discussed before, the disconnect – the “ludonarrative dissonance” – between the story and the actual game threw the difference between intent and content into sharp relief.

Rockstar have been trying to build GTA into something more than it seemed it ever could be. From its move into 3D with GTA III, it upped the production values and placed more emphasis on storytelling, all the time trying to keep the game as fun to play as possible. One of the big criticisms of the fourth instalment was that it was tipping too far in one direction, that Niko’s grand tragedy was getting in the way of the driving, shooting and fucking. Where Rockstar North want to create nothing less than a Great American Narrative, to be The Voice of a Gaming Generation, said gaming generation wants mayhem and tits. The media wants sensationalism and talking points. The industry wants units to shift. Caught in the middle, GTA tries to give us all everything because, ultimately and despite its enormous success and popularity, it doesn’t have the confidence to own itself.

I’m going to buy Grand Theft Auto V, by the way, because it will be great. Huge, enjoyable and intricately crafted, there’s no way it will be anything less than an enjoyable playing experience and why the hell else do I own a console? This is the other narrative Rockstar have under their control – that of a hugely successful company producing reliably great product. You don’t take a risk on one of their games, you buy them and – even when the experiment goes awry and you end up with something like LA Noire’s odd mash up of Choose Your Own Adventure and Dead Men Don’t Wear Plaid – you feel that you’ve got your money’s worth. Spare your sympathy, then, not for the mildly thwarted team behind one of gaming’s most successful, influential and profitable franchises. Let’s talk about the other guys. The ones without that clout.

When games publisher THQ hit the rocks in late 2012, it looked like it could take the Saints Row franchise down with it. This would have been a sad end for a series that had grown exponentially from its roots as, well, basically a GTA ripoff into something entirely its own.

My first encounter with the game was a review of Saints Row, which rather put me off the idea of playing it. It sounded amateurish and crude, the sort of game you are more likely to see in the trade-in bin at Game than on the shelf in the house of a self-respecting gamer. Reviews for Saints Row 2 were more positive, citing a more knockabout feel than the just-released open-world behemoth Grand Theft Auto IV, but I wasn’t going to buy it. Gangbangers and strippers ain’t my scene, man, and it’s just another unimaginative cash-in, I thought as I played another Assassin’s Creed game.

Ultimately, it was desperation that made me pick up Saints Row: The Third. I was bored of every single game and it looked like it would fill the open-world gap left by my having just completed the final GTA expansion pack, The Ballad of Gay Tony. It was cheap in CEX. I bought it.

It was a revelation. Violent, yes. Sexist, yes, at times*. Lacking the polish of the GTA franchise, hell yes. But beneath all that was a game that wanted to be loved. That gave you sex and violence and cars and guns and drugs with a wink and a grin.

The story was paper-thin – defeat three other gangs, then fight against The Man to claim the city as your own – but it was told with a bold freshness entirely in keeping with the chaos the character caused. Ludonarrative dissonance was a distant memory – if your unnamed central character didn’t turn up to a cut scene in a half-wrecked car dripping with zombie blood it might look odd. The music was good, and again customisable enough to put you in control. And it had Burt Reynolds playing Burt Reynolds as a character you could call on to help you in a fight.

When Saints Row IV looked like it was in trouble, it was potentially a sad day for gaming. Not so much that we would lose big franchise, but that we would lose one that understood the joy gaming could, perhaps should, deal in. Thankfully, I suspect too much money had been sunk into the project to kill it off and it was too close to release to be mothballed like a common Duke. So it was that Saints Row IV was released last month, amid some small fanfare over novelties such as the Dubstep Gun and the $1m publicity-stunt edition.

I will not suggest it was worth a million dollars, even with a Lamborghini and holiday in space thrown in. I won’t even suggest it is worth the £80 charged for the Super Dangerous Wub Wub Edition with replica Dubstep Gun (the game’s signature weapon is also one of its most baffling – a gun that fires lethal dubstep that makes the target disintegrate and onlookers shake their asses). But it is more than worth picking up, maybe even in favour of GTA V, because it does one thing better than any other game I’ve played – it makes me laugh. Sometime because it’s straight up funny and sometimes I’m laughing with sheer delight.

Take, for example, the story structure. By the end of the introduction – not even the tutorial, the introduction – you’ve manually defused a nuclear missile in flight to the strains of Aerosmith and almost immediately become President of the United States. By the end of the third mission you’re Neo fighting an alien invasion. It just gets crazier from there, because by setting their game in a simulation of the city from the previous game, Volition have burned through any final fucks they had left to give about reality.

You can run faster than a speeding bullet because, why not? It’s a game. Leap tall buildings in a single bound? They’re not real, and neither are you. Sod it, have a gun that fires black holes. This is supposed to be fun, enjoy yourself. The music you get on the radio in cars? Nice gimmick, Rockstar, but it doesn’t play when you’re not in a car. Why is that? Because it wouldn’t be realistic? Well guess what? Saints Row IV isn’t real! It’s a game! Have the music wherever and whenever you want! If this enthusiasm and generosity doesn’t make you whoop with glee, you’re probably dead inside. And if these don’t get you, then a breathless escape from an alien spaceship soundtracked by ‘What Is Love’ prefaced with the line of dialogue “Be quiet! This is Haddaway.” should. You robot!

Admittedly, it’s something of a gamer’s game. The perfect parodies of Metal Gear Solid (“Shoot the lights, then the guards.”) and sixteen-bit-era sidescrolling beat-em-ups are a total hoot for those who get the gag but may fall flat to outsiders. It’s not Volition being unwelcoming, there’s no bar to entry inherent in these throwaways, just that in their zeal to give their audience exactly what they want, when they want it, in hilarious abundance, they may have overdone the in-jokes.

It doesn’t matter. None of it matters, it’s a game. It is by its nature ephemeral, it shouldn’t make you think beyond your next button press. GTA has been criticised for not allowing you to play as a woman, and I’ve seen people honestly try to say that the game wouldn’t work with a female lead, that a woman wouldn’t do these things. Saints Row sidesteps that problem by letting you choose. Man or woman, you get the same script, get to do the same things, even wear the same clothes. Ricky Young of this parish played Saints Row the Third as a hulking brute of a man with a full beard, Monroe hair, sparkly cocktail dress and heels (a look he coincidentally rocks in real life), a fact commented on not once by the game. Why should it? There are more important things to get on with, like stealing a jet and crashing it into a crowd of football mascots.

This is why I’m still playing Saints Row IV, and why I’m holding off on GTA V – because a game so happy to indulge my stupidest whims, so full of joie de vivre (can you imagine a GTA protagonist singing along with their second in command to Opposites Attract by Paula Abdul and MC Skat Kat? Like, ever?), with an eye not on immortality but on disposability, deserves my time and attention. They made it for me, not because I own it but because they want to give it to me. 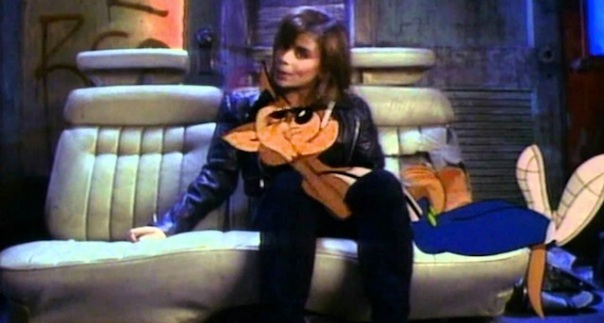 *The mission with trafficked women was at best amoral, at worst repellent misogyny and felt like a serious mis-step.

1 thought on “Saints and Winners”