The LFF opens to the public on Wednesday. Gareth Negus introduces a few films showing in the first week

The Strange Colour of Your Body’s Tears

Written and directed by Hélène Cattet and Bruno Forzani, this, like their debut Amer, is an art film that plays with the imagery of the giallo – the Italian horror sub-genre whose best known exponent is Dario Argento. If you’re unfamiliar with the form, this film may well be a bit baffling.  If you are, then … it might still be a bit baffling.

The apparent plot centres on Dan Kristensen (Klaus Tange), who returns home to find his wife missing. His efforts to find her lead him to a room on the seventh floor, where a mysterious woman tells him this is not the first disappearance in the building. Things get progressively weirder, involving childhood flashbacks, and numerous murders.

The apartment building with hidden secrets recalls the sinister complexes of Argento’s Inferno; I also spotted visual and narrative references to The Bird with the Crystal Plumage, Deep Red and Tenebrae (those better versed in Italian horror can doubtless list many more). But while many Argento films have a loose grip on such trivia as logic and character motive, they do have actual plots behind their elaborate murders and lavish images; Strange Colour seems uninterested in such things. Cattet and Forzani frequently cut abruptly between scenes, often with a character waking up in a manner to suggest the preceding events could have been a dream. (Indeed, the film starts with the camera closing in on Kristensen’s closed eyes, as though to suggest the whole film may be taking place inside his head). As a lead character, he is frustratingly blank; it is impossible for the audience to feel much empathy, or even interest, in his bizarre plight.

Clearly, narrative is not the point in a film like this; it’s purely an art film, a visual and auditory experience that isn’t designed to be watched for the story. I don’t mind being baffled by a film, but by the halfway point I reluctantly concluded that I was also really quite bored. It is stunning to look at, beautifully designed and lit, and the directors come up with numerous images as impressively wince-inducing as anything in Argento’s back catalogue; but it feels like little more than a clever, elaborate tribute act.

The Strange Colour of Your Body’s Tears screens on Friday 11, Sunday 13 and Sunday 20 October.

A Heathers-style black comedy about high school life, a monster movie, a teen lesbian romance – you can call All Cheerleaders Die many things, but you certainly couldn’t call it dull.

An expanded remake of a short film from 2001, Lucky McKee and Chris Siverston’s film opens with a video portrait of a high school cheerleader assuring us that cheerleading is the most dangerous sport in high school. She then proves her own point by dying suddenly thanks to a fumbled catch.

A few months later, the supercilious director of that video portrait, Maddy (Caitlin Stasey) applies for the now vacant spot on the cheerleading squad, but with a hidden agenda: to take revenge on the football captain (Tom Williamson) for an unspecified crime.  But just as we think we’re in for a story about Maddy taking down the Mean Girls and Boys, things take a surprising turn.

This is a film whose shifts in tone can be disconcerting, but refreshingly so (though I was uncomfortable with some of the violence perpetrated against the female characters in the final act).  However, that shouldn’t come as a total surprise from the director of The Woman, and can also be taken as an indication that I was involved with the characters.  Walking the tricky line between horror and comedy, it’s permanently one step away from lapsing into all-out silliness. For my money, it stays just on the right side of the line except for the final scene, which quite deliberately goes sailing right over the top. The last shot promises a sequel, but – much as I enjoyed, and would recommend, this film – I think I’d be fine if it remained unmade.

All Cheerleaders Die screens on Saturday 12 and Monday 14 October. 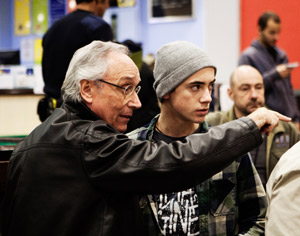 A grim tale of everyday horror, this Spanish drama looks at the miserable consequences of domestic violence in what, from the outside, looks like an ordinary family. The central figure is the teenage son, Manel (Igor Szpakowski). He regularly exhorts his mother to leave, tries to reassure his younger sister, and worries about his own future. A school science lesson on genetics, for instance, where the teacher states that half of us comes from our father gives Manel a sickening look at his possible adult self.

But while Manel gets most screen time, the film demonstrates the debilitating effects on all the family of living with a violent, unpredictable man. We get to see the mother’s bruises, and see the effects on the younger daughter, who at one point asks her brother if they ‘belong’ to their father.

Director and co-writer Jordi Cadena seems concerned to stress that this is a societal problem; both children, at different points, stare for an uncomfortably long time directly into the camera, as though pleading mutely to the audience for help.  While you may not be able to offer these fictional characters any assistance, you’re left to ask yourself if you could spot people in the same situation in the real world, and what you would do if you did. The depressing answer that this film posits is: probably not much, and probably too late.

The Fear screens on Thursday 10 and Saturday 12 October.

There’s a long list of films about young women exploring sex, a fair few of them French – and not all made by, or for, hairy-palmed middle-aged men. Whether Francois Ozon’s Jeune et Jolie, a study of a 17-year-old girl who impulsively turns to prostitution, is the best way to explore adolescent angst in a visual medium is in the eye of the beholder. Certainly, Ozon doesn’t seem concerned about sticking to the male gaze; the film opens with its bikini-clad protagonist being watched surreptitiously through binoculars. The idea that the viewer might be a surrogate for the director doesn’t particularly diminish once we learn that the binoculars are in the hands of her younger brother.

The girl is Isabelle (Marine Vacth), on holiday with her family and some friends of her mother and stepfather.  She has decided the time has come to lose her virginity, and selects a strapping young German named Felix for the task. The experience does not seem especially pleasurable – she imagines seeing her own self watching the act from a distance, as though disassociating from it completely – but it seems to spark some kind of curiosity, as we next meet her a few months later, arranging to meet men in hotel rooms for sex.

Why Isabelle has taken to this way of life is a mystery. We assume the answer may lie in Rimbaud’s poem Roman, which Isabelle’s classmates recite and discuss in school, and which declares that no-one is serious at seventeen. Ozon himself claims that the experiment is the important thing, saying in the press notes that “She could have just as easily gotten into drugs or become anorexic, as long as it was something secret, clandestine, forbidden” (though a cynic might suggest that a film about a teenage drug addict might have less commercial appeal).

But perhaps her motive doesn’t matter; certainly, the most interesting section of the film (helped by a strong cast) comes after Isabelle’s secret becomes known to her family. Isabelle has to face the virulent reaction of her mother, her slightly less outraged stepfather, and family friends who now look on her rather differently.

The question of whether her activities have had a lasting impression on Isabelle remains open, though resolution is provided with a scene that I found deeply implausible. (To be fair, there is a suggestion that it only takes place in Isabelle’s imagination).  And while the film does not sensationalise its topic  I can’t shake the feeling that fewer schoolgirls turn to prostitution willingly in real life than they do in film.