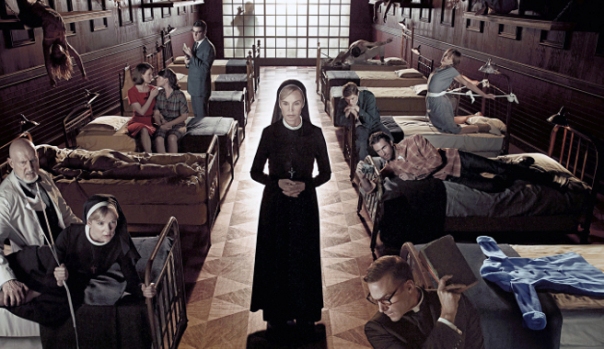 I know you like it, Americans, but you do Hallowe’en all wrong. For a start, there’s the costumes. They’re supposed to be scary, you can’t just wear any old fancy dress. Going to a Hallowe’en party as Dorothy from the Wizard of Oz is just not on, unless you’re basically admitting a deep-seated fear of gay icons. Trick or Treat? Well, that’s debatable and I don’t know who’s right or wrong but I can tell you now that ACTUALLY GOING THROUGH WITH THE TRICK IS BAD. Don’t do that. Changing your Twitter avatar to a spooky skull on the first of October? TOO SOON. The most egregious affront to Hallowe’en, however, has occurred only recently and in an unlikely spot – cable television.

You see, American Horror Story: Murder House was first broadcast on FX in the United States on the fifth of October. The second series, Asylum, premiered on the 17th of October. And Coven, the third series, began on the ninth of October. Is it too much to ask that a series so steeped in American (and, for that matter, European) horror tradition premieres on the 31st of October? Or at least as near as possible?

Happily, Fox in the UK has the idea, and American Horror Story: Coven begins here on the 29th of October. As I’ve yet to see even a second of it, all I can do today is help you to understand why I’m excited to see it return. In order to do that I’m going to do as Paul Duane did in the lead up to Asylum, and talk to you about the previous series.

American Horror Story: Asylum is a difficult show to talk about. It’s not quite the anthology series it is billed as, but it’s not exactly a coherent whole. Characters come and go, sometimes without explanation. Plot lines get dropped and picked up on whims. Everyone and anyone is disposable. Yet it is also one of the most satisfying televison experiences you can have. The label “Anthology show” suggests a monster of the week type affair, but it is more than that; a crazed scrapbook of the terrors that keep American society awake at night, real and imagined. A scrapbook whose pages bleed onto each other.

Set in Briarcliff Sanatorium in 1964 and, to a lesser extent, 2012, Asylum takes absolutely nothing but the cast (a sort of spookville repertory company) and the premise of “Anything goes, as long as it’s scary”) from the previous series. I wasn’t entirely sold ont he first episode, but the second episode snagged me with a brilliant trick. It’s set in an asylum in the 1960s. There’s spunky reporter Lana (Sarah Paulson) who’s been committed simply for being a lesbian and getting on the wrong side of the sanatorium’s fearsome Sister Jude (Jessica Lange, incredible in the role). She is finding out too much. You know exactly where this is going, and the series doesn’t mess about with a tease. By the mid point of episode two, Lana’s brain is being fried with forced ECT.

Unlike the obvious touchpoint of One Flew Over the Cuckoo’s Nest, Asylum doesn’t keep this as a final blow to our heroine’s struggle against the tyrannical regime of Briarcliff. Nope, straight in. Electrodes. Drooling. Memory shot to pieces. At this point, the series practically rolled up its sleeves and declared “Right, that’s that out of the way. Let’s get on with it.”

From there it’s almost impossible to sum up the gloriously ridiculous parade of clever stupidity that poured out of the screen without lapsing into breathless “and then..”s. It became apparent that nothing was off-limits when James Cromwell’s sinister Dr Arden was accused of being a Mengele-style Nazi war criminal… by the adult Anne Frank. To be fair, she was right, but was she really the Holocaust’s most famous victim? Who knows! And, really, who cares? There are mutants in the undergrowth, possessed nuns and serial killers stalking the halls. We’re busy.

If you’re watching a show whose idea of a Christmas special is to have Lovejoy dress as Santa then crucify Joseph Fiennes, it’s safe to say that you’re watching a show that doesn’t know the meaning of the term “over-egged”. Although it only lasted thirteen episodes, American Horror Story: Asylum managed to pack more incident into its running time than some series manage over ten years. A single episode contained more fun and excitement than an entire season of The Walking Dead (having said that, one could say the same of a single well-paced bowel movement).

When Joss Whedon wanted to have his characters sing and dance for an episode of Buffy, not only was there much made of this decision but it took up an entire extra-long episode. When Ryan Murphy and Brad Falchuk – no strangers to the musical number thanks to their work on Glee – wanted their characters to sing and dance, well, it just happened. Right there, in the middle of the episode, and it was glorious. In particular, it came at exactly the right moment – one can become fatigued by the endless twists and horror, ground down by the brutality piled upon the protagonists. Perfectly timed, The Name Game musical number raised the mood of the show just enough to make the next downward plunge as thrilling as the most expertly engineered roller coaster.

This is without going into the detail that made it all work. The beauty of the sets, the unobtrusive direction slipping between casual elegance and lurid giallo shocks, the impeccable period wardrobe. Zachary Quinto’s unbelieveably great hair and even greater apartment. The bloke out of Maroon Five getting his arm ripped off. You see, I’m doing it again, the big list of amazing things. It’s inescapable. Any discussion of the series turns into what was descibed by a poster on the MostlyFilm talkboards as “a sort of batshit Mornington Crescent”.

So what does this mean for Coven, the trailers for which promise a sort of bloodthirsty, feminist Harry Potter? That, you see, is the beautiful thing. It means nothing. Each series is self-contained. Where Asylum spoke of mental disorder, the gnawing fear that a mind could snap at any moment and cost you your liberty or your life, Coven promises a view of those at the margin, the outsiders. Accusations of witchcraft have been used for centuries to persecute women who have crossed boundaries, to push them to the edges of society and destroy them. The Salem witch trials – used so vividly by Arthur Miller as a metphor for his times – are the silver backing for the cracked mirror being held up to America this time round, and the only way to know for certain what will be reflected is to watch.