Paul Duane takes a look at Emmanuelle V, a late film by one of one of cinema’s strangest and most specific auteurs, Walerian Borowczyk, for Shadowplay’s Late Films Blogathon.

Before I sat down to watch Emmanuelle V,  I’d never seen an Emmanuelle film. I know exactly what they are, of course, and I know a tiny bit about Sylvia Kristel. The Emmanuelle Arsan book on which they’re based seemed to live forever on the rotating wire book-display of my late childhood & early teens, with its cover depicting Kristel sitting in some kind of oversized wicker chair, a piece of furniture that would ever after, for people born in the sixties at least, signify sophisticated debauchery.

Which brings us to the matter at hand – one of his final full-length features, a slightly desperate attempt to marry the danger of Borowyczk’s ‘brand’ with a franchise that by this stage had lost Kristel, and with her, pretty much any semblance of coherence.

Emmanuelle V starts with documentary-style footage of crowds on the Croisette in Cannes and a close-up of the rather basic poster for a film titled Love Express. The opening music, a warbling ballad in the manner of Bonnie Tyler, is a far cry from the musique concrete Borowczyk favoured in most of his films. I already don’t know what’s going on – an offscreen announcer talks incessantly over a tannoy, and it’s only now I’m realising that my copy of this film lacks subtitles.

Suddenly – holy shit. Without warning, we’re plunged into an atmosphere of utter strangeness. A series of tableaux, cut together too quickly for any one of them to entirely register.

A woman’s back, clad in lingerie, as she picks up an ornate tray. A heavy wood and metal box is opened by a gloved hand; a ludicrous pink toy bird is carefully removed. A toy rabbit wrinkles its nose repeatedly (in disgust or arousal?). Two champagne glasses and a napkin, lit with fetishistic care so that they resemble a section of a Vermeer, judder as a train roars through the night. A waiter, only visible from the neck down, carrying the same ornate tray we’ve just seen, knocks on a glass partition – beside him but out of his line of vision hangs a complicated item of red underwear. To pay him, a woman (again, only partially visible, face blocked out by the edge of frame) takes out a purse that is peculiarly, but unavoidably, reminiscent of a scrotum, before turning it upside down and spanking money out of it.

All this in 30 seconds of screentime, no dialogue. It’s not exactly The Ups and Downs of a Handyman so far.

However, now we see some German Expressionist shots of train wheels chuntering, intercut with David Hamilton-eque soft-focus shots of a blonde young woman who seems to be enjoying some form of stimulation. This is more the sort of thing I’d imagined. Again, though, the framing seems more concerned with concealing than revealing, and not in a teasing way. It’s like watching something intriguing through a small peephole, while you, the audience, are constrained from moving closer to inspect it in any way.

And there’s that mysterious waiter again. With that strange, ornate tray of silver teacups again. The focus is so shallow that only the slightest edge of the objects remains sharp. It’s a beautiful, mysterious image, as he knocks repeatedly and fails to gain entry to – where?

Back, abruptly, to the Croisette. Documentary style images, again cropped so that we mostly don’t see faces (a close-up and distorted image of Stallone as Cobra is a fleeting glimpse of a very different Hollywood fetishism). The faces are possibly cropped out to prevent the possibility of legal action, but the overall effect is sinister, dehumanising. Cannes is not, as JG Ballard pointed out, a particularly fun or sexy place, and as audiences parade into a premiere, the camera privileges a row of armed motorcycle police standing and watching. To prevent insurrection or to simply provide an honour guard for the one per cent?

More softcore imagery as a naked man and woman entwine in some kind of rocky cave, but the uptempo Europop has been replaced by unsettling electronic dissonance. The crowds outside the Cannes premiere mill about – oddly sped up, agitated – as the music continues and we see a helicopter shot of cliffs and an apocalyptic orange sky. WHAT IS HAPPENING? WHERE IS EMMANUELLE?

The blonde woman is being questioned by paparrazi, something about being a pornographic actress – is this her premiere? Possibly. Is she Emmanuelle? I imagine so. Is she the woman on the Love Express? Who knows? 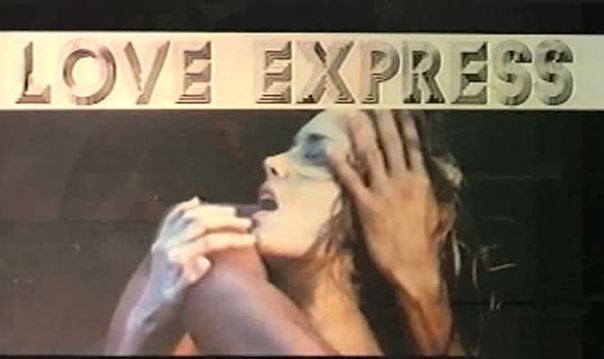 She leaves the Love Express screening, wearing a black sombrero trimmed with red roses. She’s mobbed by paparazzi – literally, physically mobbed. They start to maul her, tearing her clothes off while the crowd take photos (it looks like she’s enjoying it, though how much of that is bad acting and how much deliberate is hard to tell).

Now, like something out of old storybooks about the film business, she’s been stripped to her knickers and is running topless down the Croisette as the crowds watch impassively. She manages to get onto a yacht as the last stubborn reporter pulls her knickers off. She’s naked, on a stranger’s yacht. From this point on it seems about to get talky, and dull.

But 15 minutes in and for some reason we’re back on the Love Express. The waiter is still trying to gain entry to Sleeper 7/8 where a woman, her head cut off by the top of frame, is undressing in an entirely blank and non-porno manner that makes the camera’s steady gaze at her breasts all the more unsettling.  A large, smiling man, whose appearance is calculated to make you immediately think BLOATED PLUTOCRAT!, enters and money changes hands (the camera fixating closely on this exchange). His cane, topped with a beautifully engraved animal head, hangs from a railing and watches.

That waiter again arrives and knocks, his attempts to gain entry denied again, making me think of de Quincey’s famous essay On the Knocking at the Gate in Macbeth, but more porny. While he’s outside fruitlessly trying to attract someone’s attention, a blonde (is it the same girl? I can’t tell) is on her knees opening the PLUTOCRAT’s flies. A champagne cork flies, landing beside the same beautifully lit pair of glasses we saw in the opening. And framed against a pitch-black background, the neck of a champagne bottle ejects a stream of startling white foam in an image that’s so beautifully clichéd it feels like a classic – you get the same thing watching von Sternberg’s Hollywood films, where it feels like you’re watching a factory where clichés begin life, new-minted.

Then, kneeling into frame so that we only see her lower body, a woman begins to comb her inky black pubic hair with a black comb, the whole arrangement framed by her underwear in lines of architectural blackness. Cut to a different man, in white dress shirt, white tie, as he begins to undress. His face is cut off by the top of frame. If the object of this framing, used throughout the film, was to conceal the actors’inability to act, it begins to seem like quite a useful and beautiful conceit.

Now the images begin to enter the realm of the properly pornographic, but all the time deracinated and skewed away from the merely sexual, as if viewed through the eyes of a roué so jaded that he prefers concealment to display. Sexual intercourse is depicted by the rhythmic movement of a curved shape that is barely distinguishable as a man’s arse. A white shape – you decode it as a chamberpot – is framed by two grey-black pillars which when they move reveal themselves as a woman’s legs. That toy rabbit comes out of a handbag, and we cutaway to the landscape speeding past (and something tells me that that landscape is taken from another film entirely).  The BLOATED PLUTOCRAT greedily drinks the contents of the chamberpot. The man bearing the silver tray comes and knocks again, seemingly lacking impatience. He has a bored persistence that makes me think of death. Two mechanical toys – the bird and the rabbit– dance around each other on a table, moving repetitively, up and down, up and down. The champagne glasses clink. It’s funny and somehow terribly, devastatingly sad.

Then without warning we’re back on that yacht, watching a series of shots that seem cobbled together by a partially blind idiot. A minute or so of this before mercifully we’re dumped back on the Love Express.

The waiter has finally delivered his tray of tea! It comes as quite a relief I can tell you. The sex continues, but all of it is happening in some kind of Helmut Newton atmosphere that is less sexual than just plain forensic. The sex is intercut with the black-and-white shots of our train and its driver powering into a torrential rainstorm. And despite the fact that he’s delivered his load, the waiter is once back again at the door, carrying his tray, partially obscured, and knocking pathetically to be let in. The train powers down the tracks. The tracks lead to a word – FIN. The film within the film is over. Our tannoy announcer is back, talking about the Love Express. I wish I knew what he was saying.

The rest of the film is terrible.

4 thoughts on “All Aboard the Love Express”