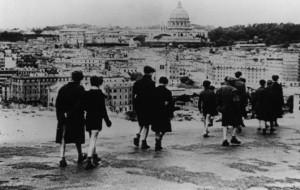 When American forces liberated Rome in 1944, they also intended to liberate Italian culture from the traces of fascism. A military commission was established to decide, rather grandly, “the future of Italian cinema”. In practice, this meant shutting everything down. Cinecittà, the largest film studio in Rome, was turned into a refugee camp. Italian filmmaking didn’t stop, exactly, but it did have to pause, look around, and improvise.

Along with Vittorio de Sica’s Bicycle Thieves (1947), Roberto Rossellini’s Rome: Open City is the imperishable monument to this new spirit of improvisation. With the exception of the script, and the strategic casting of comedian Aldo Fabrizi to drum up some funds, almost everything about Open City seems to have been thrown together. Electricity was stolen direct from the city grid to power the cameras and lights; film stock was begged and borrowed; the cast were people Rossellini found on the street. The director himself sold everything he owned just to keep the show on the road. These days, we call the result Neo-Realism, but that term seems a little grand and self-regarding for the chaos that gave birth to it.

It also seems a little grand and self-regarding for the film itself. Rome: Open City is actually an unpretentious war melodrama, shot through with earthy humour, proceeding to an ending as classically tragic as you could wish. The plot is almost cops-and-robbers in its simplicity – with noble priest Don Pietro (Fabrizi) scheming to keep his local resistance cell out of the clutches of the occupying Nazis. Where the film distinguishes itself is in its shrewd sketches of the political and financial economy of an occupied territory: the big and small compromises that need to be made to put food on the table, to get married, to pass from one part of the city to another without being arrested. These details live and breathe in the margins of the film’s increasingly thrillerish plot. They’re what you remember when the film is over. 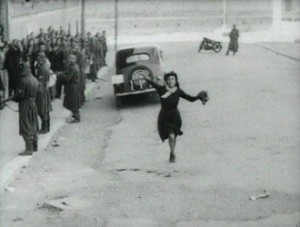 Open City’s realism extends to its treatment of violence. The famous scene midway through when the pregnant Pina (Anna Magnani) is gunned down by retreating Nazi thugs still packs a wallop: it is presented soberly as merely something that could – and did – happen. Rossellini’s restraint behind the camera is precisely what sells the scene. (It’s also significant that, in a cast of unknowns, Magnani was one of the very few recognisable faces: the kind of actor you might expect to survive till the end.)

By contrast, the lengthy and surprisingly graphic torture scene towards the end seems, to this viewer at least, overdone. It is realistic, in the sense that it’s accurate, but it’s also hostage to a plot where every resistance fighter is a saint and every Nazi a Satan. The film’s sense of social balance – the idea that one had to be a collaborator merely to survive, and that not all collaboration was evil – is here completely thrown out the window.

That might, in fact, be the film’s only real flaw: a certain moral complacency about its good characters. Even the sympathetically depicted collaborator Marina (Maria Michi) is only allowed to feel good about her position in society because she doses herself with opiates. If she were clear-headed, the film seems to be saying, she’d definitely know the difference between right and wrong. This all seems a little easy, morally speaking.

For all its obvious darkness, Open City is a surprisingly light and funny film, with occasional moments of outright slapstick (mostly performed by Fabrizi). But it’s not so long ago that it wasn’t an easy watch. Previous DVD and theatrical versions have been created from third- and fourth-generation copies, leading to hugely degraded images. Some scenes are very bright, some are so dark as to be nearly invisible. (It also didn’t help that the original was shot on mismatched and poor quality film-stock.) The new restoration was created from the master negatives, with the result that every image – while not always crystal clear – at least has a consistent tone.

Likewise with the subtitling on the new version. Open City is a film of many languages: English, German, Italian and several distinct Roman dialects. The dialects in particular seem to have caused subtitlers conniptions in the past. The 2002 Arrow Films edition of the film is notable for only subtitling about every third line of dialogue. You still get the picture, but only now does the non-Italian world have a version that’s completely understandable. “All roads lead to Rome: Open City,” quipped Godard once. That road has got a little bit easier to travel, while the destination remains as sublime as ever.

The restored Rome: Open City is in selected cinemas nationwide from 7 March 2014.