Newspapers matter. But in the digital age, with information circulating essentially instantly and continuously, newspapers don’t have the same meaning as they used to. and it’s not just newspapers; photographs are shared and appreciated digitally and more often than not never appear in printed form, books arrive wirelessly on ebook readers, magazine sales figures show a steady decline. The way we consume and share information has changed. You may be asking: what’s any of this got to do with art?

There is of course a lot of newspaper in art. It’s there, just below the surface in a lot of twentieth century paintings; it’s there in plenty of Cubist paintings and of course Jasper Johns buried bits of newsprint in his paintings of the American flag. In painting, newspaper is usually about the current; it signifies a level of immediacy and locates the work historically. When Picasso buried bits of newspaper in Guernica it was an indication of how he had heard the news of the terrible bombing of that village and the resulting massacre of its population. Gerhard Richter’s paintings of images snipped from newspapers both ascribe an importance to the power of the printed image and, by virtue of the blurriness and lack of detail inherent in big copies of small originals, demonstrate its compromised nature. Print media provides us with information about the world but for artists newspapers and magazines have also long provided visual material that can be copied or cut and pasted and used in mixed media works.

Above all, when I think about the use of newspapers and, perhaps more particularly, magazines in art, it’s collage that comes to mind. And recently collage seems to be everywhere. In 2012, following his retrospective at the Whitechapel Gallery the previous year, John Stezaker won the Deutsche Börse Photography Prize without taking a picture. In 2013, Tate Modern’s mid-career retrospective of Ellen Gallagher’s work, the artist’s first major show in the UK, overlapped with Tate Britain’s exhibition Schwitters in Britain (and with the Tate St Ives summer exhibition which included Linder’s work). This year, there are two major exhibitions that shed some light on the historical significance of collage: Hannah Höch at the Whitechapel Gallery and Richard Hamilton at Tate Modern.

Hannah Höch is one of those artists I’m aware I really should know much more about. I include her work in art history lectures but there, as in life, she becomes a peripheral figure, well connected but nonetheless on the fringes of the male-dominated Dada. The Whitechapel exhibition is fascinating not just for helping to fill in the gaps and letting us see her work brought together in quantity. Höch was an extraordinary image-maker; her collages are, in the main, less frenetic than the Dada norm (if that’s not a contradiction in terms) and it’s the considered way she combined found images that captivates; given that the notion of attaching an anti-art label to some of these works makes no sense, it’s perhaps appropriate that Höch found herself essentially excluded from the retelling of Dada’s history. 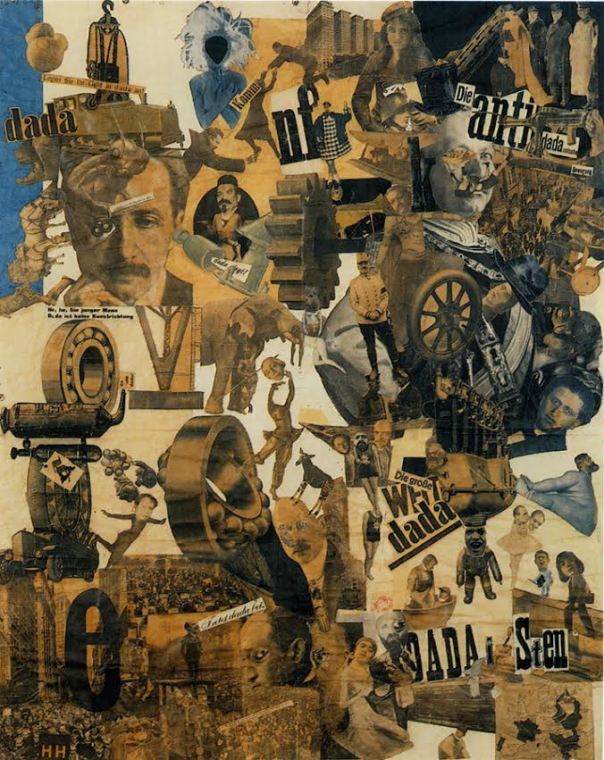 The exhibition is pretty comprehensive – the Whitechapel is a big space and the works are, in the main, modest in scale – with the best known work, from before the second world war, in the main downstairs space. It’s pretty clear by the way the crowd thins out once one makes it upstairs that this is the work that holds people’s attention most readily. In part there’s the unavoidable fact that this is work made in interesting times but it’s also that Höch embraced abstraction after the war and, though often beautiful, the work has less to tell us. Though it’s hard not to read the images as politically engaged, ultimately what comes across most strongly is the playfulness of Höch’s image-making as the chaos of collages like Cut with the Kitchen Knife through the Last Weimar Beer-Belly Cultural Epoch in Germany (1919-20) gives way to the powerful simplicity of the series of collage and watercolour works made in the latter half of the 1920s gathered under the title From an Ethnographic Museum. Here cut and paste figures are formed by juxtaposing sections cut from magazine images of contemporary German women with pictures of sculptures from an ethnographic museum collection. In a way these feel more akin to exquisite corpse drawings than Dada collages. In a short documentary screened upstairs, Höch talks about making drawings in a single sitting but spending weeks gathering images for a collage; it’s this commitment that sets her work apart for me and suggests that Höch’s work is absent from discussion of Dada collages not because it was inferior but because it was, in many ways superior.

In terms of the twentieth century British art, there can be few collages with quite such a far reaching influence as Richard Hamilton’s Just what is it that makes today’s homes so different, so appealing?, made for the catalogue of the exhibition This is Tomorrow held at the Whitechapel Gallery in 1956 and the work that gave Pop Art its name. In the Richard Hamilton retrospective at Tate Modern, this work is present in the form of a more recent print shown alongside a recreation of the installation Fun House. The Hamilton exhibition, a comprehensive retrospective that demonstrates the breadth of the artist’s practice, is in some ways an easier proposition than the Höch show. In the main this is simply a facet of the works being larger in scale meaning that the exhibition accommodates its visitors more easily. I do find myself waiting to get closer to works at times but this is less frequent that at the Whitechapel where everyone wants to spend time examining Höch’s small collages in detail. Like Höch, Hamilton is at times playful and at times political. Like Höch, he’s also a powerful image-maker. The work here reflects the energy and optimism of the British art scene of the post-war period and, in terms of media, it also highlights the shift from print to screen, albeit from newspapers and magazines to television rather than the more recent shift to the internet as the primary news source for many. Though the physical act of cutting and pasting is lost, much of Hamilton’s work directly references images from television news. In this sense, the power of the image and our shared understanding of the media remains key.

So where does that leave us? If print media has been such an important source of imagery for artists then what happens next? Of course, part of the answer may lie in Hamilton’s willingness to engage with television imagery and the immediacy of broadcast media, a path others have followed. And there is currency still in Richter’s approach to image gathering or Stezaker’s use of archive pictures, key to the artist’s practice not least because they lack the connotation of now inherent to newspapaers. Nonetheless if print media disappears then it’s not just the words we lose, part of our shared visual culture goes with them.

Which brings me, rather less neatly than I’d hoped, to Facing Extinction: Gustav Metzger at the James Hockey Gallery in Farnham. Here Metzger’s work Mass Media: Today and Yesterday is recreated as a starting point for thinking about extinction and the destruction we are bringing about in pursuit of consumption of both goods and information. Metzger says “I want this work to be useful, to emphasise the dangerous environment in which we live – events of life and death that can lead to extinction.” The work takes the form of a large stack of newspapers gathered over the past few months by students and staff* at UCA Farnham, where the gallery is, and local people. Visitors are invited to add papers to the pile and, more importantly, to read some of those already there. Anything relating to the idea of extinction can be cut out and pinned up around the gallery. In that the work deals with ideas around ecology and consumerism, the idea of the extinction of the newspaper is perhaps both central to the piece and the elephant in the room.

That this is a work that involves newpapers is unmissable. In the context of collage and the current Höch and Hamilton exhibitions, there is of course another connection. Though Metzger is well know for using existing images in his work, he tends to show them whole but in transformed circumstances – under blankets, viewable by crawling over the print with a torch for instance; mixed media, certainly, collage, no – rather than cutting and pasting. The images are somewhat defamiliarised by their incorporation into Metzger’s work but they remain recognisable if we are prepared to make the effort to look, to re-examine them. In work Mass Media: Today and Yesterday there is collage but it’s the result of cutting and pinning by the audience.

As yet Facing Extinction is in its early days. The element of collage that should populate the pin boards around the gallery has only just begun. It takes time even to scan papers in search of relevant material. Over the coming weeks though the work will grow and the odd mix of information extracted from the papers will expand; I’m looking forward both to learning something from the cuttings that emerge and to the randomness of the juxtapositions and the way the work develops visually. This is a work that demands to be taken seriously but asks for a lightness of touch along the way.

In the end, news is just information and the printed page is arguably no longer the best medium to transmit that information. I worry about the potential demise of newspapers because I wonder where the real quality journalism will come from without them (though this does seem to have been a somewhat marginal activity for some papers for a long while now). The recent prominence of collage in museums and galleries, and in my own thoughts about art, makes me also worry about the loss of print as an art material. I’m sure there are ways – it’s doubtless already being done – but I can’t quite figure out what collaging the internet looks like.

* Yes, that would include me.

Hannah Höch  is at the Whitechapel Gallery until 23 March 2014.

Facing Extinction: Gustav Metzger  is at the James Hockey Gallery, UCA Farnham until 5 April. A series of films related to the theme of extinction has been programmed to accompany the exhibition.