They’d already buried Stephen Ward before I got the chance to praise it. News broke last month that Andrew Lloyd Webber’s latest musical would close at the end of March after less than four months. I saw it in a half-empty theatre and the curtain has already come down for the last time. On the one hand, it’s not that surprising that this bitter pill of a show has failed to resonate with West End audiences. With its narrow focus on the 50-year-old Profumo Affair, its preoccupation with sex and politics, its dull and (to most people) meaningless title, it was hardly the most commercial and family-friendly of properties. On the other hand, it would be unfair to dismiss it as a complete turkey; it was a noble (if ultimately unsuccessful) attempt to address some adult, provocative and very topical themes.

The eponymous Stephen Ward was, by the start of the 1960s, a Harley Street osteopath with a ritzy client list and a penchant for working-class beauties. A charmer and a fixer, he had friends and patrons in both high and low places. One of these was the bon vivant peer Lord Astor and it was was at Astor’s Cliveden estate in the summer of 1961 that the 19-year-old Christine Keeler (one of Ward’s protegées) met John Profumo, the Conservative war minister.

When news of their brief affair broke over a year after it had ended, the scandal was stoked by Cold War paranoia (Eugene Ivanov, a naval attache at the Soviet embassy, was a member of Ward’s circle and a possible lover of Keeler’s). Profumo lied to the Commons about the nature of his relationship with Keeler, then admitted it, then resigned. While it didn’t exactly bring down the government, the episode is widely credited with killing off  the old-fashioned aristocratic brand of Toryism epitomised by the then prime minister Harold Macmillan, who stood down shortly afterwards.

Ward emerged as the figure at the centre of this complex tangle of relationships. He had ‘discovered’ Christine Keeler when she was just 17, working as a dancer and hostess in a Soho nightclub, and introduced her to the Cliveden set. She, and her even younger friend Mandy Rice Davies, moved in with Ward at his Chelsea flat, which became the setting for most of Keeler’s trysts with Profumo. In the fallout that followed, a rapacious tabloid press cast Ward in the role of pimp. Abandoned by his powerful friends and set up by the police, he was charged with living off immoral earnings and tried in a notorious case at the Old Bailey. He committed suicide before the jury could deliver its guilty verdict.

With the passing of the years, efforts have been made to restore Ward’s reputation and underscore his victimhood, most notably in Michael Caton-Jones’ 1989 film Scandal in which John Hurt played Ward. The tragedy of the man, who was chewed up and spat out by an Establishment furious at the exposure brought by the Profumo Affair, is also Lloyd Webber’s premise. The opening number – ‘Human Sacrifice’ (which is how Ward described himself in his suicide note) – sees a wax figure of Ward wake up and reflect on his fall from grace in Madame Tussaud’s Chamber of Horrors.

It’s an effective piece of musical theatre songwriting, providing context and exposition, establishing mood and character (and performed excellently by Alex Hanson) but it’s almost too good. One of the show’s key weaknesses is that it lays out its hand right at the start and gives itself nowhere to go. After the song has ended, the intriguing framing device is ditched and we flash back to Ward’s first meeting with Keeler, and spend the next two-and-a-half hours following the ins and outs of the Profumo Affair in rigidly chronological order and some detail. There’s not much subtlety: Ward’s downfall is plotted by the home secretary,  an MI5 bod and someone from the military in a shadowy backroom and we end up back with our hero, lonely in his Chelsea flat, with bottles of whisky and pills, singing about how he flew ‘too close to the flame’. 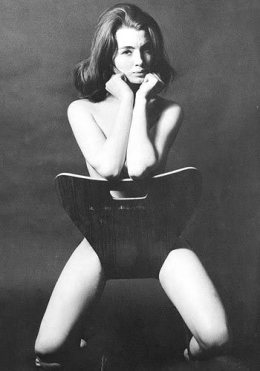 Lloyd Webber loves his misunderstood victims and I’m not churlish enough to begrudge this romanticising of Ward but, viewed with contemporary eyes, there are aspects of his story that leave an odd taste in the mouth. He’s cast as a free thinker, a man ahead of his times, a visionary who foresaw the sexual revolution and embraced the growing climate of permissiveness. And yet, in today’s post-Savile world, one is tempted to ask what a middle-aged man was doing setting up house with a couple of teenage girls. Was one of the reasons he was so indulged by powerful men the fund of pretty and up-for-it young women he introduced them to?

But these are ambiguities the show is unwilling to probe. One wishes Lloyd Webber (and lyricist Don Black and dramatist Christopher Hampton) were slightly less wedded to his thesis and to school-play levels of exposition and explanation. A looser treatment of the story, with some of the irony and distance Kander and Ebb brought to Cabaret and Chicago, would have been more interesting. The Profumo years were also those of the satire boom. A cleverer treatment – or one less mindful of the mainstream – would surely have had some fun interpreting the scandal through the lens of Peter Cook’s Establishment Club (incidentally, the setting for that photo of Keeler astride a plywood chair), or made more of Ward as detached observer of his own life.

There are occasional nods towards this sort of thing. One of the more successful numbers is ‘You’ve Never Had It So Good (You’ve Never Had It So Often)’ (a joke nicked straight from Private Eye) in which a collection of dominatrixes, judges and politicians in varying states of undress grind and shuffle in a great phalanx.

Others, such as ‘Manipulation’, work less well. Ward is an osteopath and a manipulator of people’s spines, but hangs out with politicians, spies and gangsters and they are also manipulators. Do you see? I’m being mean. It’s a neat idea that could have been pushed further than it was.

The break-out song  (if Elaine Paige’s Radio 2 show is anything to go by) is ‘I’m Hopeless When It Comes To You’, a boilerplate Lloyd Webber ballad sung by Profumo’s wife Valerie Hobson as she considers whether she should leave him. Joanna Riding brought real heart to the performance, but Hobson is only an incidental character in this telling of the story. Giving her such a big song feels somewhat unbalanced, and its blandness jars.

There is no love story in Stephen Ward, no moments of transcendence, perhaps another reason for  its failure. So, not that surprising that Stephen Ward didn’t manage to go the distance. Too cynical and weird, and too bound by the specifics of its setting. A smaller, more intimate venue might have been a better place to stage it, and its sour notes might have played better with a fringe audience. It’s a curious and interesting addition to the Lloyd Webber canon. As was the case with Stephen Ward himself, history might be kind.

1 thought on “So. Farewell then, Stephen Ward.”