A report, by Josephine Grahl, from the festival that showcases women film makers old and new, British and international. 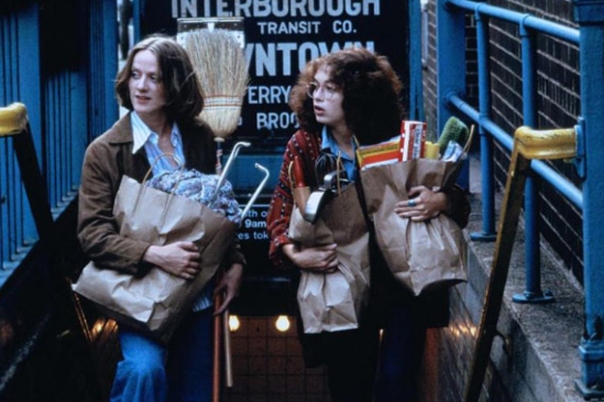 Depending on how you count them, the number of feature films directed by women in Britain last year was between 6 and 12% of the total. The annual Bird’s Eye View film festival in  London sets out to give a platform to women film-makers, showing 23 feature films (fiction and documentary) as well as shorts programmes, workshops and talks by women directors. It’s an eclectic, international selection, covering nearly a century of film-making and dozens of nationalities.

Epitomising this internationalism is Pakistani-Norwegian director Iram Haq’s I Am Yours, starring Ukrainian-Nepalese actor Amrita Acharia opposite Swedish Ola Rapace. Acharia plays Mina, a second-generation Pakistani-Norwegian struggling against her parents’ complete disapproval of her attempts to live an independent life and trying as a single mother to bring up her child in a warmer, more loving way than she herself has experienced. The struggle of second generation immigrants to find a way of living between their parents’ traditions and culture and the social mores of their country of residence is a familiar theme, but it’s Acharia’s performance that makes this film stand out – she’s utterly convincing as a woman torn apart by the conflicting demands of new boyfriend, child, ex-husband, parents, always on the edge of breakdown but never quite there.

I had high hopes of the “Fashion Loves Film” event, which last year brought together some fascinating perspectives on Muslim and Middle Eastern fashion culture, but this year’s selection focused strongly on films made to promote couture brands. Alongside a film made to accompany the recent exhibition at Somerset House of the late Isabella Blow’s couture wardrobe and a charming but very Lena Dunham-y Lena Dunham short film made for New York designer Rachel Antonoff, four of the seven short films on offer were made as part of  a series sponsored by Miu Miu.

These epitomise the problems with the nascent category of the ‘fashion film’ – they’re pretty, but essentially just moving image versions of glossy magazine ads. There is (I suppose) limited interest in seeing how the clothes look in motion, but I found the main effect of the films was to highlight why models are generally not actresses, and vice versa – not only does the blank-faced attitude of fashion models come across exceedingly boringly on film, but where in still photo ultra-thin, ultra-tall models come across as dramatically elongated, in moving film that exaggerated effect comes across as cartoonish and ludicrous. When the models jump, one can’t help but feel anxious that they’ll break something.

The general short films programmes were much more successful – my stand-out films of the British programme were Nicola Morris’s The Barber, a simple but affecting film about a man’s relationship with a father suffering from dementia, and Georgia Oakley’s Frayed. Written by Ayesha Antoine, the film depicts a woman’s journey on a London bus in a crazy mixture of hallucinatory live action and computer game-style animation. It’s a clever and unsettling reflection of the way we use technology to block out the presence of other people in public, each creating our own bubble.

Of the international shorts I particularly enjoyed Needle, directed by Anahita Ghazvinizadeh, a queasy rite-of-passage story about a young girl being taken to get her ears pierced by a neurotic and controlling mother in the throes of a divorce, and French-Algerian director Leyla Bouzid’s Zakaria, in which Algerian Zak finds out that the death of his father in Algeria brings home to him the many ways in which he still feels  a foreigner in the southern French village he has made his home.

Also dealing with questions of foreignness and alienation is Xiaolu Guo’s feature-length documentary We Went to Wonderland. Shot mostly using the video function on an ordinary digital camera (apparently the idea for the documentary came  about when Xiaolu accidentally switched her camera from snapshot to video – we’ve all done it) We Went to Wonderland follows the film-maker’s Chinese parents on their first trip to the west. Artist Xiu Lin and his wife He Ying go from Hackney to Rome and back again, and the incredibly low-tech filming gives the experience a wonderful sense of intimacy.

The experience of foreignness is made up of two things – the way you yourself experience unfamiliar surroundings and the way in which others respond to you. We Went  to Wonderland captures that duality – we see Xiu Lin and He Ying’s bewilderment, frustration and (occasionally) delight at the strange new world they’re visiting, but we also see the Pakistani shopkeeper who chats away to He Ying, completely ignoring her complete lack of English, and the park ranger who goes from sternly cautioning the couple against picking flowers to kindly assuring them that he has ‘always loved Chinese food’.

In her post-film talk, Xiaolu Guo spoke about not wanting it to be obvious that the couple in the film were her own parents, how  she had wanted to film them as though they were any subject. I think her attempts to do that enhance the way in which the film reproduces  the experience of being foreign – isn’t it only when one can see one’s parents as others see them that one finally reaches adulthood?

The last film I saw in the festival was Claudia Weill’s 1978 film Girlfriends, in its first UK screening since its release. This was a joy of a film, dealing with the friendship between struggling photographer Susan (Melanie Mayron) and poet Annie (Anita Skinner) in late 1970s New York. When Annie gets married and moves out of their shared flat both women have to adapt to their new ways of life. While smart, wise-cracking Susan is the central character throughout, neither woman’s point of view is privileged – Susan’s loneliness is held up against Annie’s difficulties in finding time to write between the demands made upon her by her husband and new baby.

The witty script as well as the shots of pre-gentrification New York might call for comparisons  between Claudia Weill and Woody Allen, but unlike Allen, Weill does seem to like and respect women as well as clearly having some idea how real people speak to and interact with each other. And the post-hippy fashions and interiors are as appealing as the characters – all aran knits, ponchos, and trailing tradescantias in macramé plant holders. Girlfriends sold out at the single BFI screening, but the festival organisers promised that they are trying to arrange more screenings later in the year at the ICA – go and see it.