Yasmeen Khan is impressed by Jeremy Saulnier’s modern noir,  a classical revenge tragedy in contemporary clothes, which is out on Friday. 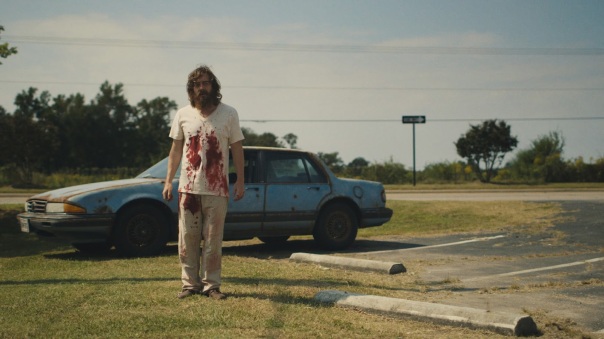 Blue Ruin is one of those deceptively simple American films, one that tells a straightforward story but with a classy thoughtfulness and moral complexity that works its way under your skin like grit. It’s a classic revenge thriller, about a man who’s driven to hunt down those who hurt his family. Plenty of blood is spilt in the service of this vengeance, but this is a film that’s always conscious of the moral questions its narrative throws up and yet confident enough to let the story’s ambiguities do the philosophical work of exploring them. It’s unquestionably part of, but isn’t a slave to, its genre. Rather, the way it inhabits its generic identity is part of what allows it to ask the difficult questions, and, crucially, to leave space for the audience to reflect on them. Blue Ruin is a challenging and satisfying film, rather than an empty, exploitative gore-fest.

The film tells the story of Dwight Evans (Macon Blair), a man paralysed by his parents’ murder years before by a man named Wade Cleland Junior. It opens on scenes from Dwight’s life now, post-trauma; he’s living in his ancient rustbucket of a Pontiac on a Delaware beach, unkempt and uncared-for, breaking into people’s houses to take baths. He rummages in rubbish bags for food, reads books by torchlight in the back seat of his home at night. Cleland is locked away in prison, but his conviction hasn’t helped Dwight gain any closure. In fact, he’s just as isolated, but he’s locked outside of places normal people go, rather than inside a cell. It’s a chaotic, desperate existence, but looking at Dwight, it seems to make sense. He’s living in an extreme version of that limbo that so often follows a devastating loss, an externalised lack of order mirroring the mental havoc within. And this demonstrates early on one of Blue Ruin’s main strengths, a commitment to psychological veracity and sympathy with Dwight’s mental state that it will maintain even as events spiral out of control. It’s intensely sad, experiencing his loneliness, but it’s nothing compared to the sadness of his memories. But we need to have this identification with Dwight; it’s a vital driving force behind the action, and yet also gives the film emotional impact and depth.

At the start of the film, Dwight’s world seems chaotic but settled, the kind of hotchpotch of temporary solutions that settle into permanency by default if you let them, just like his Pontiac’s parking space on the beach. The car (which is almost a character in its own right) looks like it’s half buried in the sand, rusted way beyond usefulness, but that turns out to be an illusion, just like the rest of Dwight’s existence. When a kindly police officer breaks the news to him that Wade Cleland is being released from prison, the spell is broken. Despite looking like neither of them would ever move again, Dwight and the Pontiac are galvanised into action, and it’s clear that all along, he’s just been keeping his life clear, ready and waiting to head for Virginia and his chance at revenge.

And Blue Ruin is a classic revenge tragedy, no doubt; the second half is a bloody, painful, scary tale of obsession as Dwight single-mindedly pursues the Cleland family, digging into the mysteries behind the murder no matter what nasty truths he turns up on the way. Revenge has a pleasing moral contrast at heart; the revenger seeks ‘justice’ but must in fact become as evil as the original wrongdoer in order to get it. Blue Ruin takes this paradox to heart, and embodies it in Dwight’s parlous emotional state, giving him no satisfaction from acting out his compulsion to avenge his parents, just a doomed certainty that what he’s doing is inevitable. That’s not to say this is a simple story. Plotting is another of the film’s strengths, and the layered mysteries get more complex as Dwight’s journey continues. To its credit, it also knows when to start wrapping them up and simplifying them again, and the plot pulls off the trick of being both satisfying and elegant.

Dwight isn’t interested in making distinctions between vengeance as a kind of abstract, justifiable pursuit, and revenge for personal satisfaction. Rather, Blue Ruin’s conception of revenge is codified, external. It’s reminiscent of the Albanian tradition of familial blood feuds, which says the family of a murder victim should kill a member of the murderer’s family as a kind of eye for an eye justice. In this way, Blue Ruin brings to mind the 2011 American-Albanian thriller The Forgiveness of Blood (Joshua Marston) and 2001’s Behind the Sun (Walter Salles) which transplants an Albanian tale to Brazil. Both films are concerned with the moral ins and outs of his kind of Biblical revenge, given a quasi-legal status in the community by the force of tradition, and applied to families rather than individuals. Blue Ruin’s violence is transgressive in this context – both the Clelands and Dwight violate the rules of the Albanian tradition – but nevertheless, they all stay within its spirit, especially in their disregard for state-administered justice. Revenge and justice aren’t interchangeable, but they’re not opposites. The other side of the coin, the antithesis of revenge is forgiveness, but this is even less of a possibility than any kind of true justice, in this moral framework. Human nature, Blue Ruin tells us, ensures that a feud like this will never end, as long as there are family members alive to carry it on.

Of course, this tells us that from another angle, a story like this is a story about family, kinship and unconditional love. Dwight has no contact with his sister, but his entire existence is consumed by his sense of obligation to his family. The Clelands may be vicious, dangerous predators, but they are a close-knit family who love and support each other, and they’ve been thrown into this horrible situation by circumstance just as much as Dwight has. Although the film starts off so definitely within Dwight’s head, it allows its view to expand to let us see this by the end. And that’s what makes it a successful tragedy – the ability to show that what’s happening now is destructive on every side, and what happened in the past, ancestrally, has made victims of everyone. Here, the iniquity of the fathers will be visited upon the children.

Saulnier says that he “was interested in exploring cinematic violence, not celebrating it,” which sums up the way Blue Ruin positions itself within the thriller genre, at the kind of literary noir end of that spectrum. He set out to make a film that would, in his words, “strike a delicate balance between emotional depth and cheap thrills, catering to both art-house cinephile and diehard genre fans.” As such, Blue Ruin bears comparison with recent thrillers like last year’s Prisoners (Denis Villeneuve) and Out of the Furnace (Scott Cooper). Its storytelling is very visual, relying on the creation of spaces and landscapes on screen and juxtaposing American road-trip beauty with the depressed, dank, interior grimness of characters’ everyday lives.  And it does have beauty. The blue of the title is prevalent, of course – doors, skies, cars, shirts, awnings, seas,bags, postboxes, dresses. Along with creams and greys for the wide open exteriors, and deep reds and browns for the claustrophobic interiors, it’s a melancholy palette that creates and intensifies the emotion of the story.

And although it is intensely filmic, the narrative also has strong resonances with modern noir literature, the novels of the likes of George Pelecanos, James Lee Burke, James Sallis and Daniel Woodrell. Good modern noir is not about originality – many of the earliest stories we have are about murder, obsession, betrayal and revenge. Rather, each new addition to the genre carries a wealth of association that can allow the moral questions to seem fresh, if handled well, because its conventions are familiar and well-rehearsed. We already bring a sophisticated understanding of the morality with us. It’s up to the film to offer enough space in the story to let us ponder on it anew. Blue Ruin’s empty landscapes and scenes of lonely night driving and tense, silent waiting create those spaces and it achieves just that.