Phil Concannon watches Matthew Barney’s Cremaster Cycle and River of Fundament. Read on if you dare.

Norman Mailer may have won the Pulitzer Prize and unanimous critical acclaim for The Executioner’s Song, but as he collected his plaudits the author believed that his true masterpiece was yet to come. “I was working with the vanity that this was the nearest I was ever going to come to the possibility of writing a great book,” Mailer told George Plimpton a few years later when discussing the decade-long gestation of his sprawling 1983 novel Ancient Evenings. But when that book was finally published, not everybody shared his view. “It is, speaking bluntly, a disaster,” The New York Times stated, while New York Magazine described it as “nasty, brutish and endless” and The Nation dismissed it as a “long and tedious wallow in the faeces of Ancient Egypt.” Nevertheless, the book sat in the bestseller list for 17 weeks and it still has many ardent defenders today.

Whether you think the book is a misunderstood masterpiece, an unreadable slog or something in between is a matter of personal opinion, but the one thing everyone could surely agree on was that Ancient Evenings was unfilmable. Opening my copy of the book (which I long ago filed away in the “unreadable” section) at random, my eyes landed on the following passage, which is indicative of the novel’s content:

“Then Thoth put His hand on the hips of Set, that is, so far as He dared, for Set was shaking with rage, but Thoth proceeded to make the same speech to the semen of Horus. Would it appear? A voice flew right out of Set’s buttocks. It was a full, sweet-smelling wind, and it said, ‘I am the transformation of the seed of Horus.’ This wind smelled sweet as lettuce. The Gods roared. For They knew Horus had buggered Set.”

Stanley Kubrick famously argued that “if it can be written or thought, it can be filmed,” and in this case the only man bold enough – or foolhardy enough – to accept the challenge was Matthew Barney. Appointed to the task by none other than Mailer himself, who regarded the artist as an authentic genius, Barney has very liberally adapted Ancient Evenings into an epic, six-hour extravaganza called River of Fundament. This magnum opus recently received its UK premiere in London, having prompted applause, disgust, awe, walkouts and general bafflement at its previous screenings. I felt it would be unwise to immediately jump in at the deep end with River of Fundament before familiarising myself with the artist’s work, and so, before his latest film screened, I spent the day with Matthew Barney’s Cremaster Cycle.

It’s hard to know where to start with the Cremaster Cycle. I would just start at the beginning but even that’s not as straightforward as it sounds. Matthew Barney produced the five films in the series over the course of eight years, but he made them out of order, beginning with Cremaster 4 in 1994 and finally completing the work in 2002 with Cremaster 3. The Whitechapel Gallery arranged its day-long event in numerical order, as per the artist’s request, but I’m not sure that’s the most satisfying way to view them. It’s not as though there is a clear narrative shape to be respected here, and there’s also Barney’s growing confidence as a filmmaker and the better-quality filmmaking tools available to him throughout the production of the cycle to be considered. In his post-screening Q&A Barney admitted that he made his first two films with a television mindset and only started working towards a more cinematic style with Cremaster 5 in 1997, and a huge leap in ambition and craft is evident in the final two pictures, with the three-hour extravaganza of Cremaster 3 clearly acting as the series’ apex. After enjoying the dazzling spectacle of that film, it comes as something of a jarring comedown to then be faced with the flat visuals and limited scope of Cremaster 4. 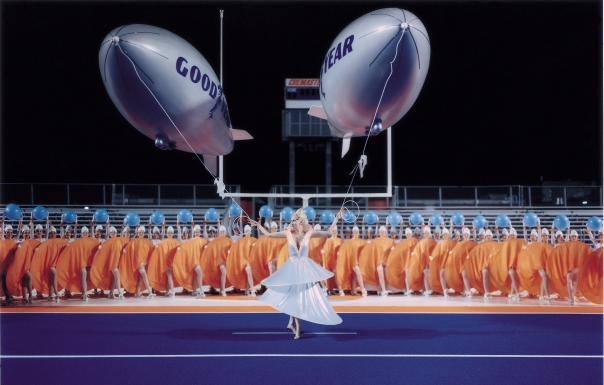 Having said that, each of these films contains at least one moment that will astonish you, and most of them achieve that feat multiple times. The cycle unfolds in a series of self-contained sequences that defy explanation, and while the programme notes handed out at the Whitechapel made a valiant attempt to explain the narrative that runs through the films, Barney’s work resides in my memory as a series of individually stunning and singularly weird images that are linked by theme rather than story. Cremaster 1 features a Busby Berkeley-esque chorus of dancing girls on a blue football field, their movements dictated by the long-limbed woman hiding under tables and stealing grapes in the Goodyear blimps that hover above them. Although Barney never really develops this situation in any interesting way, this 40-minute prelude acts as a gentle, imaginative and amusing introduction into his universe, with Cremaster 2 being markedly more adventurous and compelling. This atmospheric instalment is where Barney’s kinship with Mailer first emerges, with Gary Gilmore – the subject of The Executioner’s Song – being portrayed by Barney while Mailer appears briefly as Harry Houdini, possibly Gilmore’s grandfather. There’s a very strange sex scene involving bees, a wonderfully imaginative reconstruction of Gilmore’s crime, and a quietly intoxicating atmosphere that slowly seduces us and sets us up nicely for the sensory overload of Cremaster 3.

At 182 minutes, Cremaster 3 is by far the longest film in the cycle and if it simply stood alone as a single feature it would surely be regarded as a considerable achievement, as Barney brings a sense of shape and purpose to his work while simultaneously pushing his obsessions and stylistic idiosyncrasies to new heights. Ostensibly a reimagining of the construction of the Chrysler building, Barney successfully juggles multiple narrative threads that often seem to have little to do with each other, but he is always building towards a spectacular climax. The sequence in which a bizarrely attired Barney must climb the levels of the Guggenheim Museum while completing challenges is a near-perfect short film in itself, but there is simply so much extraordinary material to appreciate here. There’s a slapstick sequence involving a barman, a demolition derby in the Chrysler building lobby, Barney laboriously filling an elevator with cement, Aimee Mullins (Barney’s wondrous muse) slicing potatoes with her feet and being some kind of tiger/human hybrid, an anal prolapse, a zombie horse race, and some very elaborate performances of Irish songs. The scale of the production, the attention paid to costumes, prosthetics and choreography, and the sheer batty single-mindedness of Barney’s vision is something to behold. It is a feast.

I began queuing for the Cremaster Cycle at 10:30am. By the time we sat down for the fourth part of our day it was after 5pm and I was beginning to flag. The cumulative effect of the first three films, climaxing with the overwhelming Cremaster 3, had left me with an awful lot to wrestle with, and I was still trying to digest those films as I watched Cremaster 4. The motorcycle racing, tap-dancing and through-a-Vaseline-cave-crawling of the penultimate film sometimes surprised and tickled me but failed to resonate, and when neither the appearance of Ursula Andress or the sight of water nymphs tying doves to Barney’s genitals managed to provoke much of a response in Cremaster 5, I knew I was defeated. Seeing all of these films in one day is simply too much, and while I was left feeling exhilarated by the first three instalments, I was just exhausted when I had experienced all five. Getting to grips with Barney’s world demands a lot from the viewer – these are not films to be enjoyed passively – and by the end of the day I was all Barney’d out. But he wasn’t finished with me yet.

The fifth Cremaster film takes the form of an opera, an artistic medium that suits Barney’s approach rather well, and so it was perhaps fitting that I found myself at the London Coliseum, the home of the English National Opera, the following day for River of Fundament. Indeed, Barney has spoken of his pleasure at showing the film in proscenium theatres, but I wonder how much of that is down to a cheeky satisfaction at presenting something so depraved and scatological in these opulent surroundings. I doubt the ENO has ever staged anything to resemble what we see in River of Fundament‘s opening act, which begins with Matthew Barney emerging from the titular river, wrapping a turd in gold paper, and getting sodomised by the pharaoh Usermare, and ends with the spirit of Norman Mailer (played by his son John Buffalo Mailer) cutting open a dead cow, removing its organs, and crawling inside. While all of this is going on, we are invited to spend time at Mailer’s wake, as a number of guests – including Salman Rushdie, Elaine Stritch, Jonas Mekas, Fran Lebowitz and James Toback – gather to remember the author and discuss his legacy. So begins the now-familiar Barney rhythm, in which long, often impenetrable stretches are interrupted by extraordinary and shocking images, but the difference here is that all of it – the spectacular and the banal – is equally mesmerising.

Barney’s cinematic sensibility has developed to an astonishing degree since the last Cremaster film. River of Fundament has been made with a real sense of directorial control, with Barney and his regular cinematographer Peter Strietmann capturing the vast set-pieces in a series of breathtaking compositions. The film looks incredible and it sounds incredible too, with composer Jonathan Bepler rightfully sharing equal billing with Barney, both for his eclectic and imaginative score and for the complex sound design that – filtered through the Coliseum’s specially arranged speaker setup – created a truly immersive experience. As I watched the film’s centrepiece sequence, the destruction of a car in an enormous set of furnaces, the heat practically radiating from the screen, I was staggered by both Barney’s ambition and the craft that had gone into realising it. How many filmmakers in the world are making work on this scale? River of Fundament is often simply overwhelming and it is the rare film that guarantees to show you things you’ve never seen before. 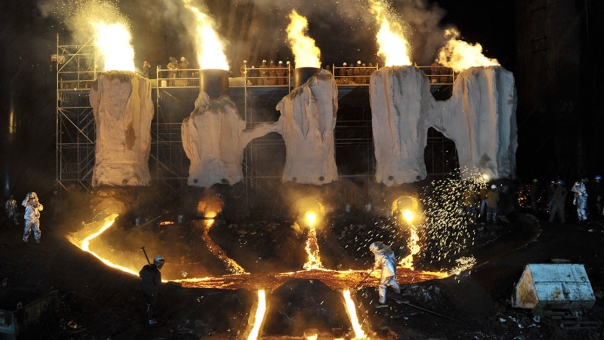 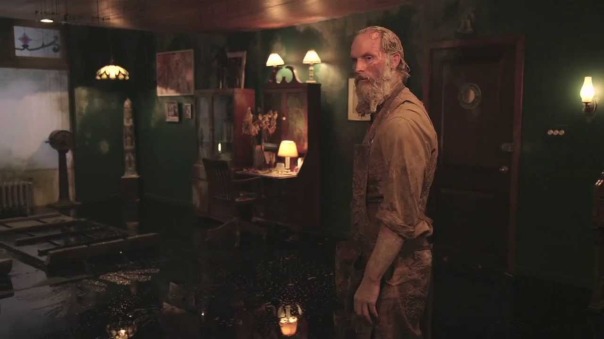 But this is a film that amply rewards the commitment that viewers make in watching it, and while there is no straightforward meaning and no easy answers to be gleaned from the film, I think all of us who emerged from the London Coliseum after six astounding hours felt like we had seen a major statement from a major artist. The human experience is reduced to its essence – we are born, we shit and fuck, we die, and life goes on – but the grandeur, beauty and boundless imagination that Barney brings to it is a celebration of the brilliance and messiness of humanity. River of Fundament will stay with me for a very long time, and it’s something that should be experienced by any curious filmgoer whenever the opportunity presents itself. Dive in, surrender to Matthew Barney’s vision, sink or swim, and perhaps emerge reborn.