Philip Concannon watches the new blu-ray of this early picture from John Cassavetes.

When Shadows was released in 1959, it caused a sensation. Shot in 16mm on the streets of New York with a skeleton crew, and with a group of unknown actors delivering improvised performances, John Cassavetes’ directorial debut felt like something entirely new and dazzling in American independent cinema. In 1968 Cassavetes made Faces, which developed the rough energy of his first feature and imbued it with a greater sense of emotional depth and complexity. Faces was eventually nominated for three Oscars and it firmly establishing Cassavetes as an uncompromisingly independent artist; a man determined to eschew the tired conventions of cinematic storytelling in his pursuit of truth.

But while Faces may feel like a natural progression from Shadows, that’s not the whole story. In the years between these milestone pictures, Cassavetes found himself in Hollywood, having been courted by Paramount following the European success of Shadows, and this brief flirtation with commercial studio filmmaking is a neglected but pivotal chapter in the director’s career. It was a time of confrontations, frustrations and harsh lessons learned, and the result is two films that are unquestionably compromised but not without interest. Cassavetes was later dismissive of the pictures he made for Paramount, and while A Child is Waiting may be worthy of his scorn – having been taken from him and re-cut for increased sentimentality by Stanley Kramer – Too Late Blues stands as both an impressive drama in its own right and a fascinating film to consider in the context of his career. “All I care about is making a movie I believe in,” Cassavetes once said when recalling this period, “Everyone else in the room with me, they’re concerned with figures rather than people and emotions. They only care about money. There are no artists in the room with me, only bankers. I’m all alone.”

This fight to hold onto one’s own sense of idealism and artistry against external pressures is one of the key themes of Too Late Blues. Bobby Darin, whose popularity and appeal was then at its peak, was foisted upon Cassavetes instead of his preferred choice Montgomery Clift, but he justifies his casting with a surprisingly complex and affecting performance. Despite his teen-idol status, the crooner isn’t afraid to play the more unlikable aspects of the character, and John ‘Ghost’ Wakefield is a difficult person to warm to. Arrogant, prickly and emotionally distant, he is the leader of a jazz band eking out a living playing bars and festivals and waiting for their big break. The band is a tight unit, but a number of disruptive influences pull them apart – most of them revolving around a young singer (Stella Stevens), a conniving agent (Everett Chambers) and Ghost’s own self-destructive ego.

Too Late Blues doesn’t really feel like a John Cassavetes film. It inevitably comes across as a little stilted and conventional in comparison to his more sprawling, raw and unpredictable later works. Cassavetes fought to make something more unconventional and provocative, but most of these attempts were vetoed by the studio. One proposed 10-minute sequence would have followed Ghost on a dark night of the soul as he wandered the city streets in a daze following his humiliation in a bar room brawl, and another major compromise was the film’s ending, which Cassavetes had envisioned as something much darker. This desire to shape a picture according to commercial considerations is attacked by Cassavetes in one of the best scenes in the film, when Ghost and his band perform for a label executive who could be a surrogate for any number of short-sighted movie producers. “You pay for what we like to play, that’s our deal,” Ghost tells the executive when he says he doesn’t like their music. “That’s the world, kid. I hate commercialism too,” he is told; “Blame the world, blame the people.” 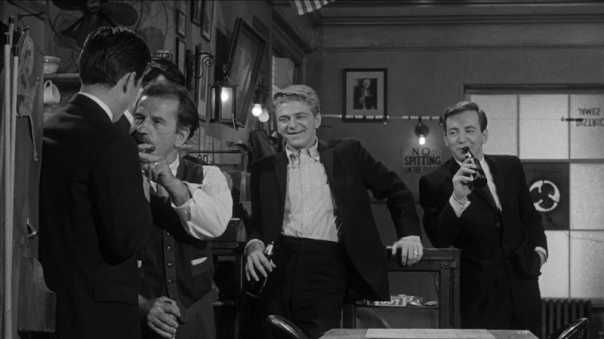 But it’s obvious where the blame lies for compromised and watered-down art according to Cassavetes. There’s a fascinating tension in Too Late Blues between the film he has been assigned to make and the film he wants to make, and he does do some terrific work within the restrictive parameters set for him. His direction is tight and elegant, and a couple of long sequences give him the room to develop a sense of simmering tension and build gradually to an emotional outburst, notably in the bar room fight and in an extraordinary attempted seduction sequence, which is where Stella Stevens’ performance comes into its own. Cassavetes had wanted Gena Rowlands to play the film’s female lead, but former Playboy centrefold Stevens possesses a timid vulnerability as this insecure woman who knows that her face and body is all the currency she really has, and she delivers an extremely moving piece of acting. Cassavetes typically draws fine performances from his whole ensemble, but the real revelation in Too Late Blues is Everett Chambers, whose performance as the cynical, double-dealing agent is an absolute tour de force. Chambers did very little acting beyond this role – he was a producer by trade, who worked with Cassavetes on TV in Johnny Staccato – but the intensity and richness of his work here makes the most repellent character in the film the most indelible too.

These vivid moments suggest that John Cassavetes could have been a first-rate studio director, bringing an unexpected edge to conventional fare, but it wasn’t to be. Too Late Blues was a flop, and following the fiasco of A Child is Waiting (which ended with Cassavetes assaulting Stanley Kramer), the young filmmaker left Hollywood licking his wounds and convinced that his days as a director-for-hire were over. But he also left Hollywood with a fresh resolve to make his films his way, with his own people and very often with his own money; in fact, it could be argued that Too Late Blues and A Child is Waiting are the pictures that made John Cassavetes into the filmmaker that we celebrate today. Perhaps his whole Hollywood experience can be summed up by a line of dialogue spoken by Ghost towards the end of Too Late Blues: “I never sold my soul. I sold me, man, but never my soul.”