Philip Concannon revisits Basil Dearden’s British classic of repression and shame, on the occasion of its Blu-ray debut as part of Network’s series “the British Film”. 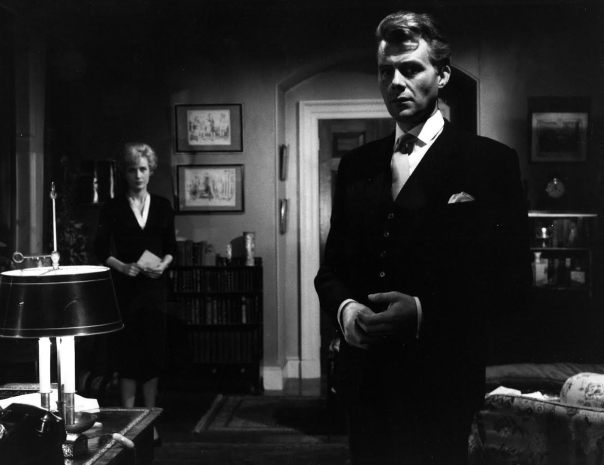 Victim begins as a mystery, and it takes a little while to reveal its hand. Jack Barrett is a young man working on a building site who freezes with fright when sees the police arriving and making enquiries, and flees from the scene. He has an anxious meeting with a friend in a pub, receiving a mysterious package while all around them seem to gossip and eavesdrop, and then he tries to contact a successful London barrister. This barrister is a man named Melville Farr (Dirk Bogarde), and he wants nothing to do with Barrett, refusing to hear his pleas and angrily telling him not to call again. When the police finally catch up with Barrett, he is busy trying to dispose of the evidence he has been carrying, the evidence that links him to Farr.

We soon learn that Barrett is homosexual, a revelation that immediately distinguishes Victim as a watershed film in British cinema. This was the first time the word ‘homosexual’ had been used in an English-speaking film, and it occurred at a time when being gay was still criminalised, despite the recommendation of the Wolfendon Report in 1957 that “homosexual behaviour between consenting adults in private should no longer be a criminal offence.” Victim arrived at a time when the tide was slowly turning, and the police were attempting to be more lenient and understanding when faced with such incidents, but the law still meant that gay people in Britain in the 1960s lived in constant fear of exposure, humiliation and incarceration. One character in Victim describes the law as “a blackmailer’s charter.”

This is the starting point for Basil Dearden’s film. In 1959, Dearden had explored racism in a Britain flush with immigrants in Sapphire, and he collaborated with that film’s screenwriter Janet Green again to examine the issues of homophobia and victimisation. Their effort is a noble one, but it does result in Victim frequently threatening to become a film in which characters are little more than mouthpieces for various points of view, and whole conversations between characters sometimes consist of pro and con arguments being batted back-and-forth. “If only these unfortunate devils would come to us in the first place” one police officer observes, to which his puritan colleague responds, “If only they led normal lives they wouldn’t need to come at all.” Later, a barman rants about the state of the nation in these changing times. “Every paper you pick up it’s always excuses. Environment, too much love as kids…too little love as kids…they can’t help it…part of nature,” he complains, “This law was made for a very good reason. If it were changed, other weaknesses would follow.”

Victim is a rather blunt film then – despite Dearden often boasting of the film’s tact – but Dearden’s skill as a director and storyteller ensures it works as much more than a simple message movie. The film unfolds as a procedural, with Farr, having discovered that his prior relationship with Barrett is under threat of exposure, determining to go after the blackmailers, even at the risk of his own career and marriage. This pursuit brings him into contact with a wide range of people who have been forced to hide their true nature, from a barber to an acclaimed actor and a number of colleagues in his chambers. The actors in these scenes often reveal the pain of having to live in the shadows, with the performance of Charles Lloyd Pack as the barber considering emigration being particularly affecting. “Nature played me a dirty trick” he says, “There’s no magic cure for what we are, certainly not behind prison walls.”

This depiction of a cross-section of British society is one of Victim’s strongest aspects, along with the excellent use of London locations and expressive cinematography from Otto Heller (his use of shadows on Bogarde’s face during his admission scene is particularly potent). Sometimes when we look back at films considered groundbreaking in their day they can seem a little quaint to modern eyes and a couple of Victim’s more outlandish elements don’t work; such as Hilton Edwards’ turn as a blind pensioner with extraordinary hearing who runs a postal scam, or Derren Nesbitt’s motorbike-riding enforcer, who always seems a little silly rather than threatening. But as a depiction of a culture that shamed and criminalised a section of society, making it impossible for them to seek help from the authorities, it still resonates today.

Of course, the single most fascinating thing in Victim is the presence of Dirk Bogarde, who made other gay-themed films in later years but never sailed as close to the wind as he did in this role. When asked why he chose to make this picture, Bogarde often spoke of his desire to lose the “Idol of the Odeons” tag that had dogged him for years and make something more mature and challenging, but there was surely more to the decision than that for a homosexual actor who never publicly acknowledged his sexuality. Bogarde once said that no homosexual actor would appear in Victim, so they had “a lot of very straight heterosexuals camping themselves silly in it” (a lie that covered not only himself but Dennis Price, among others), but his own performance has a conviction and restraint that this often mannered performer rarely exhibited. He is extraordinary in the film’s most memorable scene, when he confesses his true feelings for Barrett to his wife – “You won’t be content until I tell you, will you, until you’ve ripped it out of me. I stopped seeing him because I wanted him. Can you understand? Because I wanted him!” The emphasis in that scene was one of many contributions Bogarde made to the screenplay, and may be the most revealing. Audiences watching Victim in 1961 would have certainly been aware that they were no longer watching the “Idol of the Odeons,” but how many would have known that they were witnessing a genuinely tortured soul?