As Swallows and Amazons comes to DVD and blu-ray, Jim Eaton-Terry revisits a personal favourite. 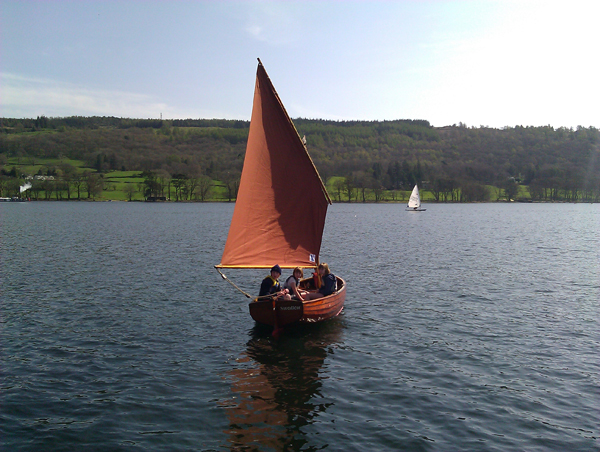 I’ve written here before about Swallows and Amazons, the 1974  film adaptation of  which is released today on DVD and blu-ray.

Though first published in 1930, the book – which tells the story of one summer holiday around a fictional Cumbrian lake – really became an established classic during the post-war middle-class sailing boom. As the story starts the four Walker children, on holiday from London, get the use of Swallow, an elderly sailing dinghy. The two older Walkers, John and Susan, are solid, dutiful, practical and just slightly dull; John constantly trying to live up to their father, absent commanding a destroyer somewhere out in the Far East, and Susan as “mate” being the perfect housewife – while their younger sister and brother, Titty* and Roger** are flighty and imaginative. Very soon they have adopted an island on the lake as a camp, and set out to explore. The plot (which is mostly an excuse for sailing hijinks) involves the Swallows encountering, at first suspiciously but soon as allies, the two Blackett sisters and their boat Amazon.  Where the Swallows are explorers –  southern, sensible, and conventional  – the Amazons are pirates – local, rebellious, just slightly wild and obviously the cooler crew. An alliance formed, the six children then get involved in various adventures involving charcoal burners, thieves,  races and a sea battle.

By 1974 the book was an established classic, and the inspiration for generations of dinghy sailors all across the UK, so a film adaptation was more or less inevitable.  It being the early 1970s, the filmmakers were able to simply decamp to the banks of Windermere with a bunch of children, some boats, and a camera, without any questions being asked regarding the safety implications: some of the footage scares the bejesus out of me, and I spent half of this morning drifting onshore in a rudderless dinghy with a terrified nine-year-old, so I’m fairly relaxed about that kind of thing.

The result is even more treasurable now than it was at the time – the film never flinches from the complete seriousness of the books,  seeing the action through the children’s eyes throughout , and therefore manages to capture the magic of the adventures and the beauty of the lake perfectly.  The unselfconscious performances and low-key period touches also help preserve the spirit of the book.

The blu-ray is an absolute revelation compared, at least, to my budget DVD version, bringing the light and the water to life better than I’ve ever seen it before. The extras are fun, too; interviews with various of the cast (though not, sadly, Suzanna Hamilton who ended up playing Julia Smith in 1984 – that says something about Englishness but I’m not certain what), and a shameless advert for holiday lets at the original farmhouse.  All in all, it’s a lovely release and if the forthcoming BBC adaptation manages to be half as charming I’ll be very impressed.

Swallows and Amazons is released today. Jim Eaton-Terry tweets on occasion and would like to make clear that no children were actually endangered in the making of this review.

**the cabin boy, of course.   Unlike in Pugwash, that really is his name