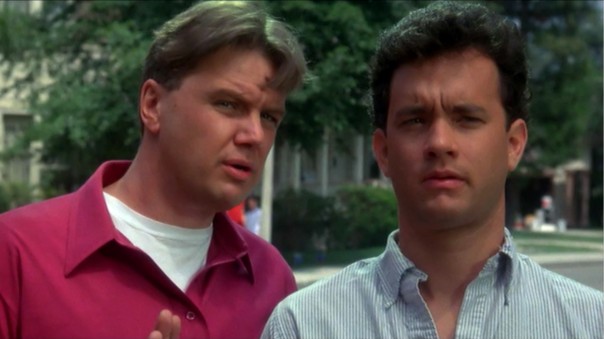 I’m always nervous when a film I loved in my youth gets a reissue. Part of me wants to retain the memories and avoid revisiting it, in case I don’t love it as much, or it’s startlingly sexist or homophobic or racist (I’m looking at you, Breakfast At Tiffany’s). Even more anxiety-inducing is the experience of introducing it to someone who’s never seen it, especially if I’ve accidentally told them it’s the “best film ever”.

Happily, The ‘Burbs is not sexist, homophobic or racist, mostly. Well, only a bit. And I did love it as much as ever, though I’m afraid I can’t say the same for my viewing companion, which makes me think that The ‘Burbs (typing that apostrophe is becoming annoying, so I apologise if reading it has the same effect, but that is the name of the film) might be one of those movies which you had to see at the time in order to fall in love with it.

On paper it looks fantastic. A starry cast including Tom Hanks, Carrie Fisher, Bruce Dern and Corey Feldman (the alive one); Joe Dante at the wheel; a punning title (it’s a riff on The Birds, if you hadn’t realised, though the plot is lifted from Rear Window): what could go wrong? Add a beautifully-cast supporting line-up and a yappy dog, chuck in some dead bodies and you’ve pretty much got my perfect film. And I enjoyed this as much as ever, although the restoration highlights the eighties cheapness of the special effects in startling technicolor. But it’s funny and frightening and plotty and twisty, and Corey Feldman’s Ricky plays us, the viewer, commentating on the action as it happens and telling us, in case we were in any doubt, how much fun it is to watch. Okay, that sounds annoying and if you didn’t love this movie as much as I do it might be, but as you may have gathered by now, I am not writing an objective review.

But let me try to convince the undecided voter. Tom Hanks shines like the sun in this movie. As the straight man he doesn’t have a stereotype or a hook to play on – he’s not Bruce Dern’s gung-ho ex-militaryman or Rick Ducommun’s proto-Homer Simpson or Carrie Fisher’s chiding wife or Wendy Schaal’s dumb blonde; he has to play an actual person, in a ridiculous and over-the-top setup, and he does it with perfect understated elegance. When Ray Peterson chants with his hands over his ears to drown out his friend Art’s paranoid rantings, when he (reluctantly) breaks into the homes of various neighbours, when he puts himself onto a gurney and asks the paramedics to take him to hospital: it’s preposterous and entirely unbelieveable, but Hanks makes it convincing, and he makes us care.

(A sidenote. Tom Hanks has most often received plaudits for his Serious Acting, beginning with Philadelphia and continuing right through to last year’s Oscar-nominated turn in Captain Philips, but for me his most dazzling performances have always been in comedies. It’s easy enough to twang audience heartstrings when you’re playing a victim; much trickier when you’re out for laughs. But that moment in Big where twelve-year-old Josh, transported into an adult’s body, finds himself alone in the city for the first time and cries himself to sleep is as affecting and subtle a piece of acting as anyone ever put to screen.)

My viewing companion’s principle objection to The ‘Burbs, technical specs aside, was that it’s slow-moving, and that’s an accusation that is in some ways hard to defend against, but my contention would be that the pace of the film is essential to the way the story builds and keeps us guessing to the end. We never know for certain who’s right and who’s wrong; who’s bad and who’s mad, and that’s what makes it so much fun. It may not be a great film, it may not even be a good film, but it’s a lovely and lovingly-made film and the enthusiasm of its cast and crew spills out even in its quiet moments.

I’m going to assume that if you’re thinking about buying the blu-ray edition you already know you like it, so I feel confident in telling you you’re going to love the extras. They include an alternative ending; feature-length “Making Of” documentary There Goes The Neighborhood; an audio commentary by Dana Olsen, the film’s writer, and the original workprint of the film, which only survives in Joe Dante’s personal collection and has been transferred from his VHS print, as well as the standard booklet, theatrical trailer and limited edition packaging. What I’m saying is, if you love this movie, the way Ricky loves this street, you’re going to LOVE this new release. If you don’t, it’s entirely probable that you needn’t bother with it, unless you happen to be the only person with a blu-ray player that a die-hard fan of the film knows and they give you wine in return for letting them watch it at your house. Cough.

The ‘Burbs is out on blu-ray today.

1 thought on “Do Not Mess With Suburbanites”