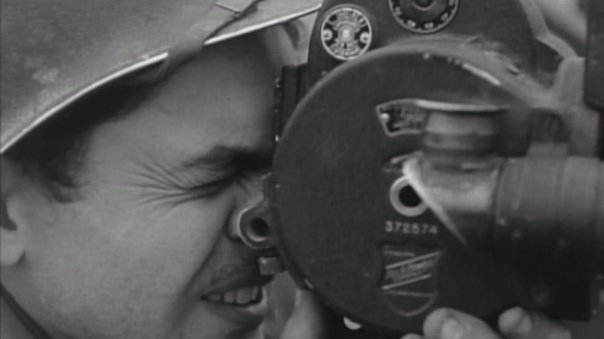 Andre Singer is best known perhaps for his work as executive producer on documentary films such as Joshua Oppenheimer’s The Act of Killing, and Werner Herzog’s Into the Abyss and My Best Fiend. Now he has directed a film that takes us back to the end of the Second World War, when, as the American and British armies moved towards Berlin from the west, and the Russian Soviet army moved in from the east, they encountered the prison camps. In its 75 minutes, the film contains a fair amount of both archive footage of the liberation of those camps, and, from intervening decades, footage of interviews with people who recall what they saw and felt, whether as prisoners, soldiers – or film-cameramen, film-processors, and directors.

For threading through the camp-liberation story is a second story: that of a joint film unit that was authorised by the British and the American governments to make short documentary films to support the war effort and, eventually, help with the task of dealing with a defeated Germany. Soldiers in the armies of both countries were trained as cameramen and accompanied the forces invading Germany. The Soviet army was doing the same.

When in April 1945 the cameramen with British forces reached the Bergen-Belsen prison camp, not far from Hanover, what they found shocked them utterly. They could have had no preparation for it, but they filmed and sent the reels back to London. As emerges clearly from eyewitnesses interviewed, the liberators felt they had entered a nightmare, while the liberated felt that they were experiencing a dream come true. The British government had had suspicions about what had been going on, we are told, partly because the Russians had earlier reported finding such conditions in camps in Poland; but the British were unsure the reports could be relied on. Richard Dimbleby, then a BBC news reporter, filed a report from Belsen in April 1945; part of which is shown in Night Will Fall. The BBC editors in London could not believe what he was saying and delayed the report until they were satisfied from other sources that it was accurate. ‘No words can express the horror,’ was Churchill’s comment on what had come to light.

Almost immediately, the man heading the joint American and British film unit in Britain, Sidney Bernstein, set out for Bergen-Belsen. He was head of the film section at the Ministry of Information (and later to become head of Granada TV). The effect on him of his visit was galvanising. He began planning a full-length documentary, and he issued instructions to Allied cameramen that they were to film everything that would one day prove that the dreadful scenes had actually taken place. It would be a lesson to all mankind, and especially to the German people. 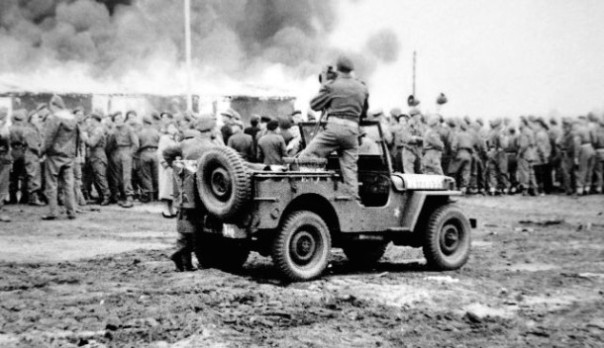 In hindsight – something I’ve always found tremendously useful  – Bernstein did his job so well that it maximised the chances that his film would eventually be canned, as indeed it was. He recruited a leading British producer, Stewart McAllister (who had worked on documentaries with Humphrey Jennings); and he gained also the participation of his friend Alfred Hitchcock as supervising director. (Both Bernstein and Hitchcock contribute interviews in the course of Night Will Fall). Hitchcock was in the USA at this time, but came over in June, and made a couple of suggestions. Bernstein had invited German officials in towns nearby to prison camps to visit and see what was happening – which was, at that time, the burial of bodies. Hitchcock advised the use of panning shots between the faces of the visitors and the actual burial activities so that there could be no question of falsified evidence. He also suggested that maps should be drawn up to identify towns and villages within one mile, or two or ten miles of a camp. It would help assess whether the German citizenry were aware of what was happening or not.

The political picture was changing, however, in unexpected ways, and government officials both in Britain and America began to worry about the impact of Bernstein’s planned film, especially as it was being made with Hitchcock’s assistance. For one thing, a problem had arisen concerning inmates of the camps who were refusing to leave. Where were they to go? Many of them wanted to go to the USA, Britain, or Palestine. ‘No’ they were told. Suggestions that Bernstein’s film would show some sympathy with their wishes were unwelcome news to officials.

Bernstein seems to have ignored the politics swirling around his work, and the team carried on working through July of 1945. But another serious issue was brewing. In August a message from the Foreign Office stated that policy towards Germany was now heading firmly in the direction of providing support to the German population, who had been bombarded with so much that would make them feel guilty that they were dangerously apathetic. It went on: ‘people close to the Commander-in-Chief [Churchill] are saying: “No atrocity film.”’

By September the edit had been shut down, and the unfinished film, together with shot lists, notes, other reels of film and the completed script, was filed. It was not the end, however. Footage shot by the army cameramen did indeed do what Bernstein wanted it to: it provided damning evidence of atrocities in the war crime trials that began in the autumn of 1945, and the subsequent international military trials in Nuremberg that began a short while later.

In a final curtain-raising flourish, we learn that an Imperial War Museum team has for four years been working on the filed material, and using the script to make a meticulous reconstruction of Bernstein and Hitchcock’s intended final section. A spokesman for the Museum team says : ‘We knew it was a powerful piece of cinema made by some of the best film technicians and writers of the era.  What we wanted to do was ultimately to complete the work of these original film makers.” Bearing the original title, German Concentration Camps Factual Survey, this 90-minute film will be premiered in Britain later this year.

Claude Lanzmann, director of Shoah, once said that in a film on the Holocaust, he had deliberately avoided archive footage because audiences no longer feel the effect of it. He preferred the immediacy of interviews with witnesses giving first-hand accounts. I must agree with that. The most moving moments in Night Will Fall are those in which American, British and Russian soldiers fall silent and struggle for composure as they recall what they saw. And I must pay a tribute here to the use of silence in this documentary. It really lets you multiply the meaning of what you have just seen or heard.  When the soldiers are not silent, they all say the same things. The stench of the dead and decaying bodies in the camps has stayed with all of them. The other thing the soldiers all say is, ‘You can’t forget’. That indeed is the point of films like this.

Lanzmann suggested that archive footage of atrocity scenes has lost its power. I suppose that most of us have seen photographs or brief footage of the dead piled up in Nazi prison camps, stacked horizontally like dolls or mannequins, stark naked and emaciated to hollowed out scraps of humanity, mouths open in suffering. Night Will Fall exposes us to more of this than we are likely to have experienced before. I agree with Lanzmann that one acquires a veneer of hardening oneself to such scenes. But there was also footage I had not witnessed – the moving of the corpses to the burial pits. At Belsen the British ordered the SS guards to do the moving.  Some of the spindly corpses flop as they are dragged across muddy ground. Some are half-lifted on to a guard’s shoulder, and their skulls flap around crazily in a horrid simulation of a life-like toss of the head. For me this carried a strong and disturbing suggestion of how they might have moved in life, and it still carried quite a charge.

I have mentioned only Belsen-Bergen.  It is the camp with which Night Will Fall opens, and it is given the lion’s share of attention in the documentary.  But there is quite enough on other camps – Majdanek (in Poland, liberated by the Soviet army), Auschwitz, Buchenwald, Dachau – to round out the picture of what the Nazis created.

Night Will Fall? The title is among the last words of Bernstein’s script: ‘Unless the world learns the lesson these pictures teach, night will fall.’

Night Will Fall is currently on a limited UK-wide release. German Concentration Camps Factual Survey will show at the BFI as part of the London Film Festival. Peter Morgan is a former civil servant. He sings folk music and is slowly learning how to use a mobile phone.