Dave McKean’s new film is a bit like a Julian Barnes novel with added CGI monsters. Surprisingly, the part that Spank The Monkey has a problem with is the CGI monsters. 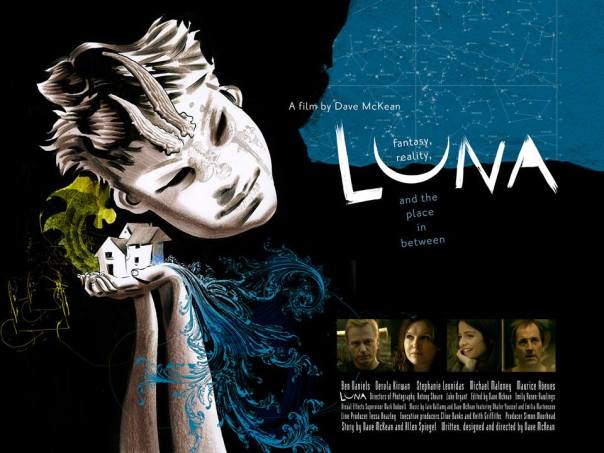 If you’d asked anyone a decade ago what they thought a Dave McKean film would look like, you’d have got one of two possible answers. The first would be “who?”: the second would be “like an animated Sandman cover, I suppose.” Anyone who was aware of McKean back then would have known him from his comics work in collaboration with Neil Gaiman, and the covers he created for the long-running series The Sandman were the most visible part of that. A sequence of impressionistic collages assembled in a variety of physical and digital media, they established a house visual style for the comic that was generally several leagues ahead of the art to be found inside it.

When McKean’s first feature MirrorMask was released in 2005, pretty much nobody was surprised to see that it looked exactly like an animated Sandman cover. Written by Gaiman, it told the story of a young girl who retreats into a fantasy world inside her own drawings, using it to escape the guilt she feels over her mother’s illness – exactly the sort of territory that Sandman readers were familiar with. It wasn’t quite the next-generation Dark Crystal that its producers The Jim Henson Company were hoping for, and its fuzzy multi-layered look hasn’t aged well, but it’s notable for building a world out of green-screen sets long before that became the normal state of affairs.

With McKean being one of the few filmmakers who routinely demands a ‘directed and designed by’ credit, there was a risk that all of his subsequent movies would look like that: happily, that hasn’t been the case, although he’s only made two features since then. The Gospel Of Us boldly took the 2011 Port Talbot Passion Play – Owen Sheers and Michael Sheen’s sprawling piece of community theatre, which occupied the entire town for a weekend – and miraculously created a cinematic framework capable of containing it. And now we have Luna, which tries to find new ways of breathing life into the genre of middle-class relationship drama.

Out on the North Devon coast, under the light of a full moon, two couples meet for a reunion. The venue is a house in the middle of nowhere, owned by Dean (Michael Moloney): visiting him for the weekend are Grant (Ben Daniels) and Christine (Dervla Kerwan). The three of them have known each other since art school, meaning that Dean’s much younger girlfriend Fraya (Stephanie Leonidas) is going to spend most of the weekend feeling like an outsider, even though she initiated the reunion in the first place.

Luna‘s premise has the texture of a modern literary novel, with McKean himself going on record as saying he wanted to make “an unashamedly middle class film.”  Watching the early scenes, it struck me that this is what a movie of Iain Banks’ final book The Quarry would look like: a group of middle-aged college pals, plus a younger person watching them on the sidelines, trapped in an isolated location and gradually getting on each other’s nerves. In this case, absent friends, missed opportunities and bad decisions will all worry away at the two couples, as it becomes apparent that the one thing they have in common is loss.

This could easily be a radio drama, or a play performed on a two-room set. But because it’s Dave McKean, we expect him to heighten the emotions of the story with his distinctive visual sense. The use of the location is particularly inspired: early tracking shots through the narrow corridors of the house emphasise the claustrophobia of the setting, while the eerie countryside exteriors are manipulated in ways reminiscent of Andy Goldsworthy’s work. As Dean is still a working artist, we get to see his art all over the walls of the house (like MirrorMask, this is a story whose protagonist draws exactly like Dave McKean does): in a particularly subtle touch, that art frequently changes to match the mood of the drama taking place in front of it.

When the film is operating at this level visually, it’s fine. But McKean can’t resist also including a number of fantasy sequences, showing the mental landscapes that the characters inhabit: predominantly Grant and Christine, who’ve suffered a major trauma before the start of the story. These are… well, they’re like animated Sandman covers. As they increase in intensity, the visual symbolism stops being impressionistic and becomes far too on-the-nose. Grant has his demons: we get that, we saw him staring at a bottle of vodka earlier. To have him being chased along a beach by actual CGI demons is a bit much.

To be fair, when a film has the tagline ‘fantasy, reality, and the place in between’, you can’t complain too much about it going into these areas. A key dialogue scene faces Dean off against Grant: the former is currently much more successful than the latter, mainly because he’s choosing to work in the lucrative field of fantasy illustration, rather than spend his days drunkenly grumbling about we’re all spending too much time trying to escape the real world. But the ensuing argument feels a little too much like McKean setting up advance justification for the (admittedly lovingly rendered) FX blowout that’s to come.

When McKean uses big, computer-generated visual devices to explore the inner world of his characters, you find yourself watching them as technical exercises rather than feeling the emotions they’re intended to evoke. But in the earlier part of the film, he uses much simpler means to evoke those emotions more successfully – the manipulated landscapes, the slowly evolving décor, and some edgy jump-cutting during the big emotional revelations, the shots fracturing before our eyes like the characters. Towards the end, the simple visual image that holds together the final scenes has exactly the right combination of unspoken emotion and visual whimsy. These sequences are all the better for being staged on a much smaller scale than what comes between them.

There’s a risk that Luna may lose you in its overwrought middle section: it came very close to losing me. Nevertheless, by the end McKean’s achieved his aim of examining the theme of loss, more through images than through dialogue. The four performances that the film revolves around are all fine (with Stephanie Leonidas building nicely on her teen lead role in MirrorMask a decade ago), but to be honest this isn’t a film that people will come to see for its actors. Despite its flaws, given how few out-and-out visual stylists British cinema has nowadays, we should make the most of McKean’s rare movie outings when we can.

Luna will be screening in a series of one-off performances at UK Picturehouse cinemas from October 12th – see here for details. Dave McKean will be holding a Q&A session after each screening.