The 58th BFI London Film Festival opens tonight. Spank The Monkey has probably been to more of them than you have. 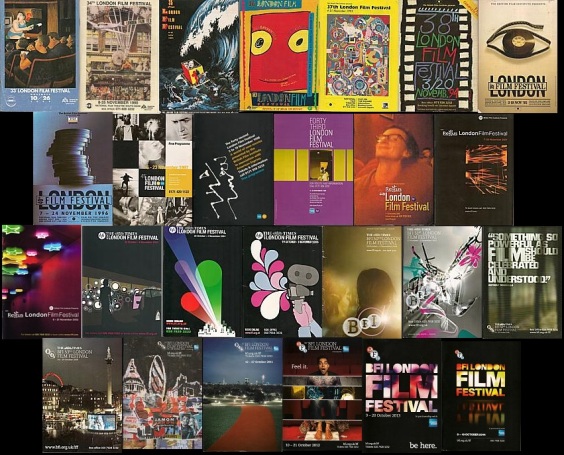 I can trace it back to 1988, I think. That was the year I first remember reading a preview article in Time Out about the upcoming 32nd London Film Festival. The list of films they had on offer looked interesting, so I made some enquiries about getting hold of tickets. The box office staff just laughed in my face, as all the good films had sold out ages ago, thanks to the advance booking rights held by British Film Institute members. By January of the following year, I’d joined the BFI: I’d have to wait until November before I could attend my very first festival.

I’ve still got my programme from the 1989 LFF, and all the other ones since, as you can see above. Looking through that programme now, it’s a very different beast from the one for the 2014 event, in several ways. The director of the festival at that time was Sheila Whitaker, who’d been in the job since 1987, and she was encountering the same problem that all her successors have had to deal with: programming a festival of films that may not otherwise be seen in London, while keeping enough populism in the programme to encourage new viewers along.

Here’s a good indicator of how the 1989 programme coped with that balancing act. The Opening Gala screening was Ron Howard’s Parenthood, a huge commercial proposition by anyone’s standards: the Closing Gala was Ettore Scola’s What Time Is It?, which never achieved UK distribution beyond that screening. The whole festival was built around that split personality, with the arthouse movies racked up at the National Film Theatre, while the more commercial stuff played in desultory one-off screenings in Leicester Square. The closest thing to a celeb-heavy bash was the UK premiere of Back To The Future 2, where the most famous person I saw was Terry Wogan. But the arthouse strand was where some real gems were hiding, from Cinema Paradiso via Leningrad Cowboys Go America to Santa Sangre.

And that was just 1989. Over the next few years, Whitaker would make very gradual changes to the programme which would bring it closer to the festival we know today. She would increase the programmes of animated shorts, just at the time when Aardman were starting to conquer the world with the likes of Creature Comforts. She steered the programming away from the Eurocentric ideal of arthouse cinema, even if it was a process so gradual that initially Asia, Africa and Latin America were bundled into a single strand called Three Continents. She also expanded the scope of the Archive programme, which initially concentrated on British restorations, but grew to include those from the rest of the world.

But the most radical change Whitaker made was the one that seems the most obvious now: rather than use the West End for occasional screenings, grab an entire cinema for an extended block of time, and use it to give the Festival a visible presence to the sort of people who wouldn’t normally venture into the South Bank. Don’t just show the big commercial films there: give people the chance to see the arthouse films there too. It was a move that paid off handsomely in terms of box office receipts.

Which made it all the more surprising when Whitaker apparently fell foul of internal BFI politics, and used her introduction to the 1996 programme to announce that this would be her last festival, and this was not her decision. She continued to innovate even then: 1996 was the first year that the Festival had its own in-house website, after a couple of years when the IBM PC User Group had produced their own unofficial one as a demonstration of this new thing called the Internet. To be frank, though, it was terrible,  and the User Group were put back in charge for 1997.

Whitaker moved on, establishing the Dubai International Film Festival, and running it until her death in 2013. Her successor back in London, Adrian Wootton, kept her innovations in place during his five year tenure, and brought in a couple of other tweaks along the way: the introduction of the A4 magazine programme format, and the phasing in of above-the-title sponsorship courtesy of Regus. But one particular change had a more dramatic effect than even he might have realised. In 1998, still struggling to make an official festival website work, Wootton gave the job to the web team from The Guardian. They brought in lots of trendy interactive features, including the publication of reviews by their most irritating readers, and the establishment of a discussion forum. That forum evolved into Film Unlimited the following year. When Film Unlimited collapsed in 2011, its members vowed to keep things going with their own site. So without Adrian Wootton, we wouldn’t have Mostly Film. Thanks, big guy.

I’ve made it sound like most of Wootton’s work on the festival was on the business side, but there were some artistic highlights in there too. A gradual increase in the number of Masterclasses, where the likes of Thelma Schoonmaker revealed trade secrets. Major events like the UK premiere of The Idiots, screened under club conditions because non-BFI members couldn’t be trusted to control themselves at the sight of an erect penis. The seat-of-the-pants thrills of the 2001 festival, when several high-profile US guests like Bruce Willis and Martin Sheen cancelled their appearances in the wake of 9/11. Wootton was the most confident LFF director I know when it came to standing in front of an audience, which made his Surprise Film introductions hugely entertaining. Mind you, you’ve got to have confidence when you’re introducing a film as terrible as Hearts In Atlantis.

That was in 2001, Wootton’s last festival as director. (I’m sure the two events weren’t related.) He’s still involved with the LFF to this day, as a consultant on Italian cinema. But throughout his tenure, his deputy Sandra Hebron was always a highly visible presence, which made her rise to director in 2002 seem like the most natural thing in the world. Hebron’s ten years in the role turned out to be as heavy on innovation as Whitaker’s, finding even more ways to reach out to audiences beyond the usual South Bank crowd. She established a public version of the Festival’s press launch, only marred in 2002 by it coinciding with a tube strike. She turned the Surprise Film into a must-see event – whereas you sometimes felt Wootton filled the slot with anything he could lay his hands on at the last minute, Hebron always tried to present a film that she would have been proud to schedule in the main programme if she’d had the time. She extended the festival out to the suburbs, using cinemas at the outer limits of the city.

She also continued to extend the sponsorship of the festival, with The Times eventually becoming the title sponsor of the event for a full seven years. At the same time, she started increasing the number of high-profile gala screenings that took place under the festival umbrella, cannily increasing the number of potential sponsors who could get involved. All of this apparently helped to keep the ticket prices down, although when you look at the stats for the Opening Gala you wonder what they would have been like without sponsorship.

When Greg Dyke became BFI Chairman in 2008, he went on record as saying he wanted a more populist festival. Hebron gave him the publicity he wanted with the world’s first public screening of Quantum Of Solace, but at the same time she gave the Closing Gala slot to a movie whose distribution had just been put in jeopardy by the collapse of Warner Independent Pictures. Echoes of 1989 there, but as this movie was Slumdog Millionaire, Dyke ultimately couldn’t complain.

In 2012, Hebron moved on to train as a psychotherapist. As I said to her in an email on her departure, “if I ever develop mental health problems, I’ll be sure to try and track you down! No, wait, that came out all wrong.” Her successor Clare Stewart came over from the Sydney Film Festival, and had the bad luck to take over the LFF in a period of austerity, meaning that one of her first acts was to cut its duration from 16 days down to 12. But a few of her other changes have undone some of the pioneering work Sheila Whitaker did all those years ago: the loss of the animated shorts collections, for example, or the decreased focus on the Archive section in the printed programme.

My own personal bugbear is that the branding for Stewart’s three LFFs to date could be for a film festival anywhere in the world – Hebron always made a point of emphasising in the publicity that this was a London event, particularly in the festival trailers. More controversially, Stewart brought over the Sydney festival’s arrangement of the programme into touchy-feely emotional categories – Love, Laugh, Thrill, Chunder and so on – and that initially riled people who were used to more traditional geographical categories like AfricaAsiaAndTheBitsDownTheBottomOfAmerica. These days, it’s become apparent that all these categories are another sneaky way to increase the number of gala showcases, and thus ramp up the festival’s visibility even more.

People are always going to complain about change, particularly when they’ve been around as long as I have: 25 years, 26 festivals. For me, that all adds up to almost a year of time off work, approximately four hundred thousand words scrawled across the internet, plus three books. But I wouldn’t trade it for anything. If you’re in London, and you love film, then the London Film Festival is the only place to be. I’m still surprised that it took me until 1989 to work that out.