At the midpoint (or thereabouts) of the 58th London Film Festival, some of our regular contributors talk a little about what they’ve seen so far…

It Follows by Ron Swanson

Easily the best horror movie of the year and one of the best in recent memory, It Follows is an extremely uncomfortable but entertaining watch from director David Robert Mitchell (The Myth of the American Sleepover). While festivals aren’t always the best platforms for genre films, the audience I saw It Follows with lapped it up (there were screams, gasps and embarrassed post-jump laughter, not all of which were exclusively from me).

Jay is a 19 year-old girl, who sleeps with her new boyfriend, who then reveals that he has passed on a hex, which means that she’ll now be followed by something that wants to kill her, horribly. The only way to get rid of the presence is to sleep with someone else, and pass it on. There are a few other pertinent things to know – if the follower kills its target, it goes back to the previous carrier. It doesn’t run, just walks steadily towards its prey and can change its appearance at will. It’s impossible after the first couple of times we come into contact with the presence to stop yourself from searching the background of every frame for something malign heading slowly but inexorably towards the camera.

It’s absolutely beautifully shot by Michael Gioulakis, who along with Mitchell uses long takes to build the sense of dread to almost unbearable levels. In a couple of set-pieces, his use of Steadicam tracking shots is breathtaking. Alongside the look of the film, the score (by Disasterpiece) is brilliant, evoking the 80s aesthetic and bringing to mind the films of John Carpenter, particularly Halloween, to which this is a worthy successor.

The Salvation, The New Girlfriend and The World of Kanako by Laura Morgan

I didn’t exactly mean to see The Salvation. I got the title confused with something else and only realised my mistake as the opening credits appeared, by which time it seemed too late to rectify it. Fortunately, it’s as least as much film as the film I meant to see probably is. Somewhere between out-and-out Western and revenge thriller, its lavishly-shot locations (South Africa standing in dazzlingly for the Wild West) and authentically chilling performances had me gripped for all of its neat eighty-nine minutes. Mads Mikkelsen stars as Jon, a former soldier who has left his wife and child at home in Denmark in order to build a new life in 1870s America. When they come out to join him tragedy strikes almost immediately – there is no padding in this movie – and we then accompany him as his search for retribution leads him into mortal danger. Featuring horses and gunfights galore (but very little gore), this is one to watch on Boxing Day for years to come, which I mean as a more hearty endorsement than it sounds. The fun is only heightened by an entirely unnecessary and almost silent turn from Eric Cantona as the chief villain’s henchman, whose smouldering glare is probably not supposed to be quite as funny as it ends up being.

Intentionally funny and just as much fun is François Ozon’s The New Girlfriend, based on Ruth Rendell’s short story of the same name which, I only realised when the principal reveal came, I have read. I don’t remember a great deal about it, but I don’t think it was nearly as sweet or affecting as this film is (I mean no insult here to Rendell, whose writing is many good things but I don’t think she’d expect sweet or affecting to be among them). Romain Duris and new-to-me Anais Demoustier as the leads make a convincingly awkward not-couple gradually building a new relationship out of the remains of something destroyed. It would be easy to play Duris’s role for laughs, and that certainly happens in places, but there are also moments of genuine emotion. Demoustier has the harder job to do as Duris’s straight man, and she does it fabulously. It’s an insubstantial little story in some ways, but it’s told charmingly.

I need to preface my review of Tetsuya Nakashima’s The World Of Kanako with the confession that I saw it at the end of a very long day of moviegoing, so it may be my fault rather than the film’s that I struggled to keep up with it. Kôji Yakusho stars as Akikazu, a father whose daughter goes missing. Being a divorced ex-cop he naturally goes looking for her in the most violent, boozy antagonistic way possible, and on the way he discovers that Kanako, the eponymous daughter, is not the innocent he believed. The moral of the story seems to be that if you are violent, boozy and antagonistic you may discover that the apple doesn’t fall far from the tree, but the film’s structure deliberately reflects the way Akikazu learns about his daughter – in small glimpses, via second-hand stories and overheard snippets rather than from anything resembling a straightforward narrative. It’s a smart move, but the prismatic, point-of-view style means you need your wits about you in order to follow it. 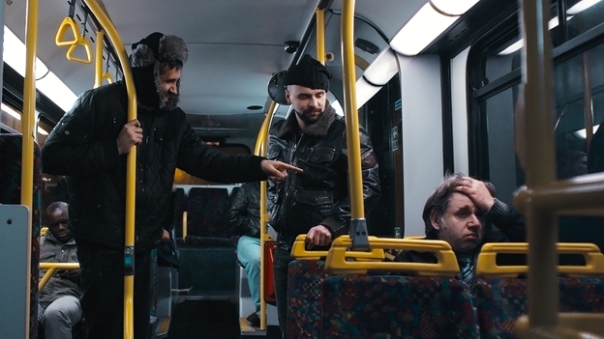 Many viewers will feel a pang of recognition as they watch Night Bus. Simon Baker’s film takes place on the N39 as it makes its way to Leytonstone in the early hours of Saturday morning, with a wide variety of passengers getting on and off along the way. Baker restricts the action almost entirely to the two decks of the bus, cutting between conversations and incidents throughout the film to create a mosaic of London life. A married couple starts bickering on the way home from a fractious evening out; a group of teenagers get into a row over music being played too loud; drunk people make their way home from parties; a stressed man argues with his ex-wife over the phone; a girl cries alone.

Throughout Night Bus I was extremely impressed by first-time director Baker’s handling of tone. He skilfully moves from one person or group to another, finding numerous moments of humour amid the sadness and letting the ebb and flow of conversation dictate the rhythm of the film. He also breaks things up at the right time with the arrival and departure of different people, or with an amusing montage of inebriated souls giving the beleaguered driver a hard time (“It’s been one of those nights,” he wearily tells one of them). But the biggest factor in the film’s success is its large cast, all of whom fit perfectly into the ensemble and make a key contribution – even if it’s only a fleeting one – to Baker’s keenly observed, funny and hugely accomplished snapshot of one night in the capital.

A Girl at My Door by Philip Concannon

Alcoholism, abuse, paedophilia, homophobia, illegal immigration – taking on any one of these issues might be enough of a challenge for a first-time director, but July Jung’s A Girl at My Door boldly tries to tell a story that involves all of them. Perhaps inevitably, the film ends up feeling a little bit overcooked, but until it enters a troublesome climactic stretch it works as a provocative and emotionally involving drama. Set in a small, isolated Korean village, Bae Doo-na stars as Young-nam, a police officer dismissed from her position in Seoul and ordered to “lay low for a year” as punishment for some vague infractions. There’s little for a cop to attend to here, but Young-nam finds herself drawn to the plight of Do-hee (Kim Sae-ron), a girl who appears to be suffering at the hands of her violent stepfather and eccentric grandmother. Feeling that she must step in to protect this bruise-covered child, Young-nam takes Do-hee into her home, but this action unleashes an unexpected wave of suspicion and small-town gossip.

The first half of A Girl at My Door is the most successful, as Jung focuses on the development of the relationship between Young-nam and Do-hee, and the film’s subtle, sensitive storytelling and beautiful compositions sometimes recall the work of Lee Chang-dong (here credited as a producer). It’s certainly an assured debut, but the director’s lack of experience is telling in the way the film seems to get away from her as dramatic events and revelations begin to pile up. Some sequences towards the end of the film feel uncomfortably manipulative and more appropriate for a horror film than the realistic drama A Girl at My Door is aiming to be. The film hangs together primarily thanks to the actors. Bae Doo-na gives a restrained and quietly compelling performance as a woman desperate to keep parts of her own life hidden from public view, while Kim Sae-ron is astonishing as the child who may be more dangerous than she initially appears. A Girl at My Door may not be wholly successful, but it is a daring and often very moving piece of work that boasts some of the best acting you’ll see on screen all year.

Testament of Youth by Ron Swanson 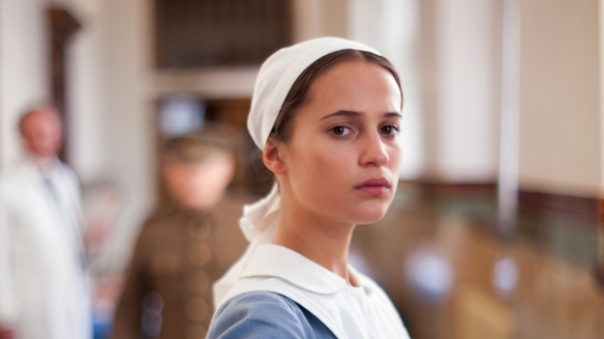 Testament of Youth, this year’s Centrepiece Gala at the London Film Festival, is a steady and polished adaptation of Vera Brittain’s autobiography. 100 years after the start of World War I, Brittain’s story is still as affecting as it ever was, even given our familiarity with the conflict, its brutality and the staggering losses it brought to bear. Just after falling in love, and receiving her dream Oxford scholarship, the war broke out, and changed the course of her life, with her brother and soulmate (Taron Egerton and Kit Harington) enlisting immediately. Brittain’s decision to abandon her studies to serve as a nurse gave her a first-hand insight as to the horrors of war, and how it impacted both sides.

As Brittain, Alicia Vikander gives a spiky and soulful performance, which completely dominates the film. Faced with strong supporting players like Emily Watson, Hayley Atwell, Dominic West and Miranda Richardson, it’s Vikander who resonates, burrowed into the audiences’ memories. The rest of the film is effective, but does little we haven’t seen before, in Vikander’s performance, however, it has something very special indeed.