It being Halloween, MrMoth thought he needed a spooky project to get to grips with. Unfortunately, the only thing he could think of was “What if I watched all the Resident Evil films?” 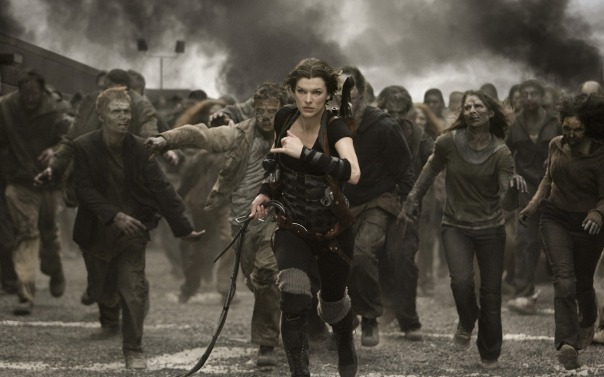 I love Resident Evil, me. I bang on about Resident Evil 2 whenever anyone asks me about my favourite videogames, and if anyone wants to see a perfect reinvention of a franchise, I would point them to the magnificent Resident Evil 4. Starting as open love letters to George A Romero’s massively influential zombie flicks, it has over time carved its own distinctive niche in popular culture. It’s also, being a long-standing Japanese franchise, a tangle of continuity, plot lines and ever more advanced and disgusting beasts. There are 24 in the series, comprising seven “core” games and 17 offshoots, spinoffs and remixes.

This is bountiful territory for film makers looking to cash in on the popularity of games, and so it came to pass that no less a zombie celebrity than Romero himself came to be attached to a movie adaptation. Sadly, his script was balls so it was passed to dependable hack Paul “The Other Paul Anderson” Anderson. Twelve years later, Anderson is still making Resident Evil films. Seeing as they’re nominally horror films, I thought I would watch all five (Resident Evil, Apocalypse, Extinction, Afterlife and Retribution – the sixth and final is in production) and report back. Here, then, are five things I discovered when watching all the Resident Evil films:

1) Paul WS Anderson does not understand how references work.

To Paul, making a pop-culture reference simply means pointing at a thing that exists and saying ‘look, I know this thing exists that you also know exists’ and hoping for the best. For instance – did you like that bit in Terminator 2 when Arnie is amazingly, supernaturally, accurate with a minigun? He shoots all the cars and guns and such but misses all the people? Yeah? Well so did Paul! He liked it so much he basically repeats it in Resident Evil: Apocalypse! To no useful end, though – the Nemesis spares a single non-combatant,but it’s not really clear why. At no other point do Umbrella bioweapons consider civilian lives worth preserving. Just because it’s from T2 and T2 was great.  There’s no life to that reference.

Hey, also, did you like in Aliens when the proximity scanner suddenly showed a ton of aliens in the immediate vicinity of the space marines? Wasn’t that great? Remember the claustrophobic terror? So does Paul WS Anderson! Only he can’t quite translate that into any kind of tension when he tries the same trick. It’s just someone saying “Hey, remember that bit in Aliens?” at you while you eat stale popcorn.

The most egregious of these hollow tributes is embedded in the name of the central character. An invention for the film series, Milla Jovovich’s amnesiac re-killing machine Alice is set against the Umbrella corporation’s evil AI The Red Queen from the start. Aha! You might think. A clear allusion to Through the Looking Glass, and What Alice Found There. Then she heads down to the Hive, through underground tunnels, just like Alice entering Wonderland through the rabbit hole. The references don’t stop there, though; in the third film we are introduced to another supercomputer named The White Queen. This then leads to… to… well, nothing.  There’s nothing further to it than “heh, clever reference, bro”.  It gets worse, though, when you realise that…

The natural reference point for all these movies, it goes without saying, is the Resident Evil games series and, sure enough, Anderson screws up almost every attempt to use them.

In Retribution we meet the Las Plagas Zombies, taken from the fourth game in the series. They attack a mercenary outfit. One of them comes at the group with a chainsaw – but they’ve got machine guns so why on Earth would they use something as ridiculously inefficient as a chainsaw? Ohhhh, one of the zombies in Resident Evil 4 did! Well, there you go. Chainsaw. The issue here is that the chainsaw-wielding zombie in RE4 was used only as a tool to induce panic in the player, who was isolated and outnumbered. Against a heavily armed group of mercenaries, it makes no sense.

Or the Nemesis. The Nemesis is the toughest monster of both the second film and the third game, and there is nothing human or humane about the Nemesis. It is a relentless, remorseless foe that clomps slowly towards the player throughout the game until you get a chance to finally turn the tables and destroy it. So what does Anderson do? He turns it into a protector. Remember how I said he paid homage to T2 earlier, with the chaingun stunt? Could it possibly be that the Nemesis protecting a cute kid is the payoff to that moment? I’d love to be able to give PWSA that much credit, but I can’t.

Or Leon. Leon S Kennedy is one of the videogame series’ most cherished characters. Introduced in the second game, the upstanding rookie cop cemented his reputation as the go-to good guy in Resident Evil 4; a man with integrity and inner strength, respect for others and a fine line in shooting people in the face with bazookas. After four Leon-less films, he was finally introduced in Retribution where one of the great heroes of videogames was portrayed as… an amoral mercenary and a total sleaze. I mean, at one point he comes on like a PUA, sliding his hand up the thigh of Ada Wong (another fan favourite).

I could give dozens of these little examples, but one thing sticks out…

Umbrella manage to wipe out nearly every human in existence but to what end? They’re a business and the undead are not a target market. By the fifth film it’s clear that the Red Queen is intent on destroying humanity. The problem is that humanity is well on its way to total extinction by the time of, well, Extinction. Las Vegas is a ruin, buried by the Nevada desert in just five years. There’s no coming back from that, but still Umbrella hold board meetings and employ receptionists (exactly how were they recruiting their staff? “Are you a zombie?” “No.” “Welcome to Umbrella.”). Their long-term plan made no sense, and it’s worth noting that in the games, humanity is in much better nick.

But that’s ok, because they were never going to benefit from it, anyway. Every single one of their developments got away from them in one way or another. The Red Queen goes rogue and kills everyone. The Nemesis turns goodie. The super-secret exit to their bioweapons lab is besieged by thousands of zombies, kept at bay by the thinnest of chainlink fences. The airtight lab they store their highly infectious weaponised virus in has aircon vents that link directly to the offices. If their underwater base loses power, all their soldiers go to sleep during the power cut. They leave hundreds of clones lying around of their most powerful enemy.

Who do they choose to lead their Special Forces operations to recover Project Alice? Oh, right, Jill Valentine her one-time best mate only they’ve put an implant in her chest to make her a baddie. What’s that? Oh no it’s just sitting there, right on top of the skin, visible thanks to her plunging neckline. But surely it has some sort of protection, a failsafe in case of – nope, it just rips right off and she’s okey dokey within a minute or two. Wow, Umbrella your “not-a-zombie” recruitment policy is really not working out.

You know, if I was making films and my wife was an actress I’d probably… No, you know what? I wouldn’t. I would not have my wife naked in my films quite this much. Although actual nudity is pretty rare, in every single film Milla Jovovich is either draped in a shower curtain or dressed in the least practical medical gown you’ve ever seen – essentially two squares of cotton tied at the corners. And if it’s not that, she’s naked in a vat.

Look, I get it. The man fancies his wife. That’s great! I feel the same about my wife, god why marry someone if you don’t fancy them? I just don’t feel the need to film her naked – or, in the case of Apocalypse and Extinction, have two other dudes, one of whom shot Duran Duran’s Wild Boys video, film her naked. It wouldn’t even occur to me. And if she’s not naked, she’s in the most ludicrous clothes. Sure, Ada Wong and Jill Valentine have ridiculous costumes but they’re direct copies of videogame outfits which are always a bit weird, a bit sideways to reality. But Alice? No excuse. From the absurd get-up in  Apocalypse…

…to the outrageous fetish suit of Retribution. Which, and we can time this because there is a countdown, takes her not more than one minute to put on, including dozens of buckles, straps and clips. And at that point she doesn’t even have her superpowers! One wonders if Anderson and Len Wiseman have a friendly rivalry going on “Hey, guess what I insisted my wife wore in this scene…”

This is all a bit of a distraction from Jovovich’s importance to the franchise. Without her, I don’t think the films would have been as much of a success. Her central performance has been nominated for that most enervating of awards, a Razzie, proving once again that dreary po-faced exercise in forced cynicism is a good indicator of precisely fuck-all. Credited as co-creator of Alice from Apocalypse onwards, she holds the films together. Her performance moves easily between superhuman death-bringer, protective surrogate mother of various foundlings (because PWSA really likes the Newt/Ripley relationship in Aliens!) and avenging angel of humanity. She even manages to bring some vulnerability and charm to the role when necessary. Without her, the films would be almost completely unwatchable because, in the final analysis…

Paul WS Anderson’s films occupy a sort of filmic Uncanny Valley. At first glance, they look like solidly entertaining films; well-budgeted, nicely shot and peppered with fan-pleasing references to genre greats. This impression shifts the closer the viewer looks; when the hollowness of the homage becomes apparent, when the style that was already compensating for a lack of substance is shown to be a limited box of tricks, when the plots fall apart at the slightest prod, it’s hard not to think you’ve been duped. The smiling face of the entertainer is the rictus grin of a cinematic automaton.

Even when acting only as writer/producer his stamp is so indelible that he may as well have directed Apocalypse (poor Alexander Witt’s only film as director). Extinction smothers Russell Mulcahy’s 80s music video tics in service of Anderson’s barely-coherent take on Mad Max 2. Returning to the director’s chair for Afterlife and Retribution, it was as if he had never left. In effect, he hadn’t.

It’s not that he doesn’t try. I believe he is absolutely sincere in his love for these projects and I genuinely think if you met him he would talk passionately about his favourite films. He’d bang on about Resident Evil 2 if you asked him about his favourite videogames. I recognise his enthusiasm in my own. His Resident Evil series is a devotional tract dedicated not only to a series of outstanding games but also to the woman he loves. Is it his fault that he falls just short every time, that all the joy he has in making these films never gets to the screen and the films tumble in to that Uncanny Valley? The Resident Evil films aren’t good, but they’re not bad, either. They’re just… banal.