Danni Glover prepares for an audience with the Pope. 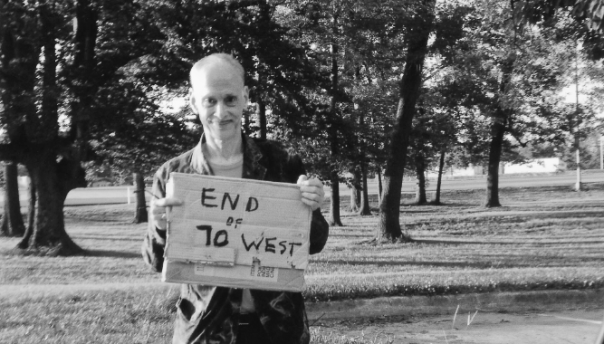 “I’m so tired of writing “Cult Filmmaker” on my income tax forms.” John Waters wrote in his 2010 essay collection Role Models. “If only I could write “Cult Leader”, I’d finally be happy. Would you come on a spiritual pilgrimage with me?” If any filmmaker could make that request in earnest, it’s John Waters. Actually, his film Cecil B. DeMented flirts with the idea but instead of shaving their heads and leaving their families, the characters have their favourite directors names tattooed on their person. I don’t have “John Waters” inked in a love heart on my arm, but I do have a pink flamingo on my foot. Close enough. When the Pope of Trash announced he would be touring a sermon around the UK, then, of course I sold all my worldly possessions, downed the Kool Aid, and bought a ticket.

Waters’ last tour, This Filthy World, was adapted into a feature in 2006 by Jeff Garlin. This time, This Filthy World vol. 2: Filthier and Dirtier is a book tie-in. Carsick, released this year by Corsair, is the mostly-fictional, partly-true memoir of the director’s experiences hitchhiking from his home in Baltimore to San Fransisco. If it sounds like the most deranged mid-life crisis project you’ve ever heard of, that’s because it is. It’s now fifty years since Waters made his first short film Hag in a Black Leather Jacket and ten years since his last feature film A Dirty Shame, and Carsick was a replacement project for his unfunded film that never was (a children’s movie about shoplifters). To Waters, hitchhiking is an all-American pastime ripe for teen rebellion and parental nightmares: Traci Lords (as Wanda Woodward) and Divine (as Dawn Davenport) both thumb a lift away from their repressive family homes in Cry Baby and Female Trouble respectively, but on the other hand Raymond and Connie Marbles kidnap unsuspecting hitchhikers for their baby farm in Pink Flamingos. You get the impression he’s thought about this a lot. There’s a fantasy and an aesthetic to hitchhiking that encapsulates both the very local and the very broad, much like Waters’ films. Geographically Baltimore, but anthropologically anywhere in the world, or at least anywhere where there are weird suburbs.

I converted to the Church of John Waters when I was seventeen. Pink Flamingos showed at the local arthouse cinema’s contribution to the LGBT festival. This particular theatre is beautiful, a plush art deco cavern with 400 seats and a licensed bar. I couldn’t think of anywhere better to watch Divine revel in the indignities and splendour of the human body – until I saw Female Trouble six months later projected onto a wall in a disused schoolhouse near my home that had a communal garden and language classes for asylum seekers in the next room. I felt like his films spoke to the part of me that loved the scabby roguishness of my community as well as the part that was intellectually aspirational. The appeal of his films ranges from picked apart in academic snobbery to being noisily devoured by the midnight movie masses. Perhaps the only other director with that kind of broad yet obsessive appeal is Harmony Korine, equally as fixated on trash and taste but nowhere near as affectionate or sensitive.

His characters – a motley crew of recurring actors known as the Dreamlanders – are villainous but charming; he rarely works with heroes (Tracy Turnblad being a notable exception, while Polyester’s Francine Fishpaw is a tragic damsel) but we kind of root for them anyway. What’s more, he welcomes us to extend a compassionate character reading to his actors, several of whom have led lives of infamy prior to joining the cult of Waters: Liz Renay, a gangster’s moll, appeared in Desperate Living after serving 27 months for perjury, Traci Lords, who is under the legal age for appearing in adult films in all but one picture in her pornographic career has a memorable supporting role in Cry Baby, and Patty Hearst, who committed armed robbery while apparently in the Stockholm Syndrome induced control of a far-left guerilla group who kidnapped her, has appeared in five of his films. Is his obsession with their seedy pasts exploitative? When Lords asked him to baptise her (having been ordained to marry Johnny Depp and Winona Ryder and used his role as spiritual advisor to talk them out of it) he didn’t release her from her sins, but from the sins that had been done against her. It seems – to me at least – that his obsession lies with observing reaction, not action. He collects press clippings, he attends trials. At least recently, he isn’t making films about people doing shocking things; he’s making films about the shocking response from a discompassionate public. Waters is also committed to prisoners’ rights, teaching a film class to inmates and thoughtfully and reasonably advocating for the release of Manson family member and convicted murderer Leslie van Houten. Censors and critics have accused him of being sick, a pervert, a corruptive force, but maybe he just projects love and acceptance into the places that nobody else is willing to. If you were feeling poetic, you could take the moniker “The Pope of Trash” literally. You’ve got to sift through a lot of dog shit to find something divine. Testify.