“There are nine million bicycles in Beijing,” sang Katie Melua once, somewhat fatuously claiming it an undeniable fact. Something Beijing definitely has a lot of; TV channels and Caulorlimes* watching them…

Occasionally we mention that we also have a talkboard. It’s lovely over there. On that talkboard there are, as you might expect, various threads devoted to some aspect of running this place. All things considered, it’s surprising that some variant of this conversation doesn’t happen more often.

MrMoth
Right, look, I still need something for next week and I really don’t want to go with a DVD review. One or two volunteers PLEASE.
Caulorlime
Have you got a theme or anything?
MrMoth
Pfft. Themes!
My theme is BRILLIANT WRITING. I realise it’s a tricky one.
Caulorlime
Doesn’t help me pluck an idea out of the air, I’ll be honest.
MrMoth
You’re in China, there must be something in the popular culture over there that’s grabbed your interest?

Firstly, he’s right. I am in China. That isn’t some sort of slang. I live in Beijing, and have done for a couple of months now. So you’d think his other assertion would also be right. I mean, Beijing in the twenty-first century, for God’s sake! This is like living in Renaissance Florence or Victorian London, isn’t it? New York in the Twenties? Don’t I basically live in the centre of the World? Well, no. In fact, I live in a small flat on a school compound about thirty miles from the centre of the world. Oh sure, that means I’m closer than you, but for a man as lazy as me, it might as well be West Bromwich. I don’t drive, or speak Chinese, and getting a cab back from the centre of the world can prove tricky. Apparently, in parlance that you westerners might understand, the centre of the world is north of the river, and I am sarf.

I do have a tele, though, and a huge selection of shows. Thing is, like so much out here, satellite tele has been reverse engineered by people who only briefly saw the original and didn’t entirely understand what they were looking at. I have an EPG, but it only tells me the channels, not what’s on them. Sometimes selecting one will tell you what’s on it at that time, but not what’s on later, and none of my channels agree on what time it is anyway, or where they are. Sometimes it simply doesn’t work anyway, or turns out to be something else entirely. On occasion, brilliantly, an entirely different EPG indicator will just pop up out of nowhere and change the station, like someone else, with a different system, is controlling my tele. It’s all very confusing. At any rate, the basic situation is that I don’t know what any of three hundred channels are, nor if they work, and if they do it is extremely unlikely to be in a language I can understand. Much of it is, frankly, fucking baffling.

Still, Moth wanted to know what my cultural life in Beijing is like, so here we go. I propose to cycle through my channels giving each one thirty seconds to impress me. If it looks good, I’ll leave it on a bit. I’ll try and describe what I see. If any of it is particularly mental, I’ll take a photo. And I mean a photo, with a camera. I could no more work out how to do a screen shot of this system than I could land a space shuttle. Who’s with me?

The first few should be easy. They’re American channels, HBOs and Foxes. The fifth one is called Fox Moive, so that might be interesting.

HBO is showing Jack Reacher. Rosamunde Pike’s polo neck is so black she looks like a disembodied head. Tom Cruise is being filmed from below, which isn’t having the effect they were hoping it would. Next.

HBO Hits has American Hustle. Too many beards. Also, why is Bradley Cooper? Next.

HBO Family is showing AI. I don’t remember Frances Thing being in this, but there she is.
Seen it though, so Next.

HBO Signature takes almost the full 30 secs to buffer. When it pops up it’s Rome. I love Rome. 13! Seen it though. Rules is rules. Next.

Fox HD is usually showing something Chinese, but this time it’s an advert for The Walking Dead. Oh, now the advert’s over. Running Man is on. It might have an English title, but that’s as far as it goes. There are Chinese subtitles, though, so maybe it’s Japanese, or possibly Korean. It seems to be a gameshow. A youth just got thrown into a tank of what looked like actual faeces. Now teams of men are hitting maths problems with paper fans while another man shouts at them. There are no women in this. Oh no, there’s one. She’s wrapped in a towel and looks like she might be upset. I think, on balance, Japanese.
Worth more than thirty seconds but still; next.

Fox Moive HD didn’t buffer in the thirty seconds. No Moives for me. Next.

Fox Moive Action is showing The Karate Kid. The new one. This is set in Beijing. I might give this a minute. Right, I watched about twenty minutes of that and it wasn’t terrible. Somewhere along the line, between the face pulling, jumping onto bicycles without seats, falling out of buildings and Chris Tucker movies, Jackie Chan took the time to turn into a really great actor. And Jaden Smith, well, he really is a horrible little cunt, isn’t he? Next.

Actually, I went and got a beer. Yanjing brewery. They know how to aim high when it comes to sponsorship.

Huanyu HD. Now we’re talking. I think it’s a talkshow. There’s a host, crazy glasses, and a sofa. Also some guests with Chinese writing appearing below them, like on the Jeremy Kyle show. I imagine it says something like “Gao Yun: drank too much Baijiao at her sister’s wedding and slept with all the guests.” One guy doesn’t have Chinese writing below him; he has “ART JOEY.” I’m not sure what Art Joey’s deal is – he looks pretty smug.
Shit he’s got a knife! I’m not kidding, he’s got a knife! He just pulled it out and started thrusting it vigorously at the audience. The others all seem pretty calm, though.
Wait, oh, it’s OK. It isn’t a talkshow – it’s an infomercial. Art Joey is slicing through a novel. Next.

Dics – turns out to be Discovery world. I seem to have hit an unexpected seam of these channels. I’m not going to write a list of vertebrates that I haven’t bothered to watch occasionally interspersed by Mythbusters or programs about the Royal Navy. Massive ten channel Next.

ASN HD – Ice Hockey. Obviously not. I’m also going to skip anything sport related. And stop saying Next. I’m starting to irritate myself.

TVB – OK, Asian sitcom. Odd. There’s a man in a sort of khaki samurai cloak, and he’s in a coffee shop.  He has an incredibly long wig on which is the colour of no-one’s hair ever. It reminds me of Paul McCartney in the mid-nineties when his hair was a sort of a burgundy shade.

Anyway, he’s shouting at the customers and the young woman behind the counter. The laugh track is incredibly loud. He seems to be getting instructions on his behavior from three old people standing in the doorway who are communicating with him by holding up placards. Maybe they’re scoring him? I have literally no idea what’s going on. This might be worth a photo or two. One of the old people is wearing a tank top and another is dressed the way Sid James did when he dressed as a hippy in Carry on Camping. 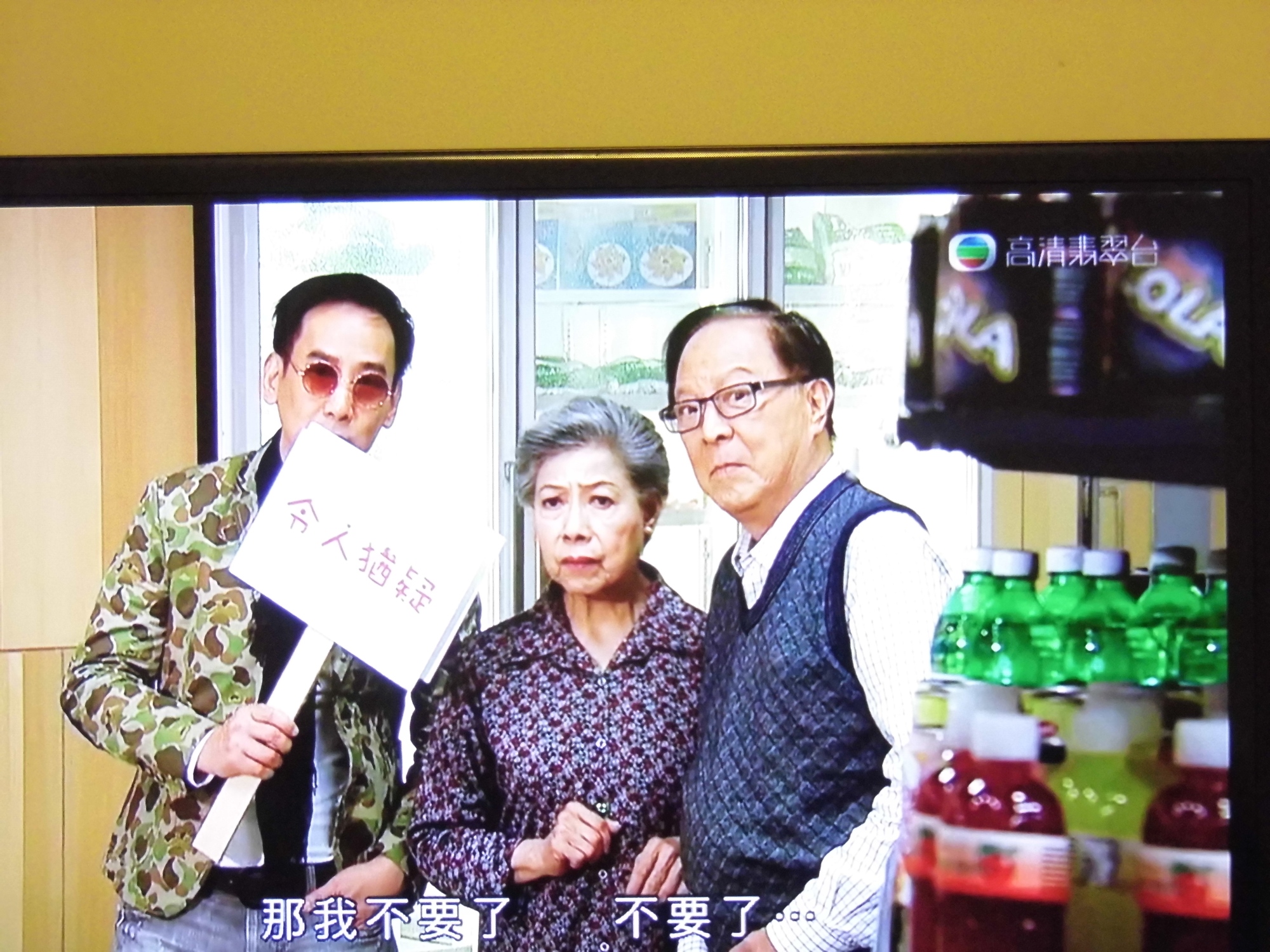 Scene change, now we seem to be watching a love scene. There’s a young-ish couple flirting on the street. The woman is quite attractive. The man is Kim Jong Un. 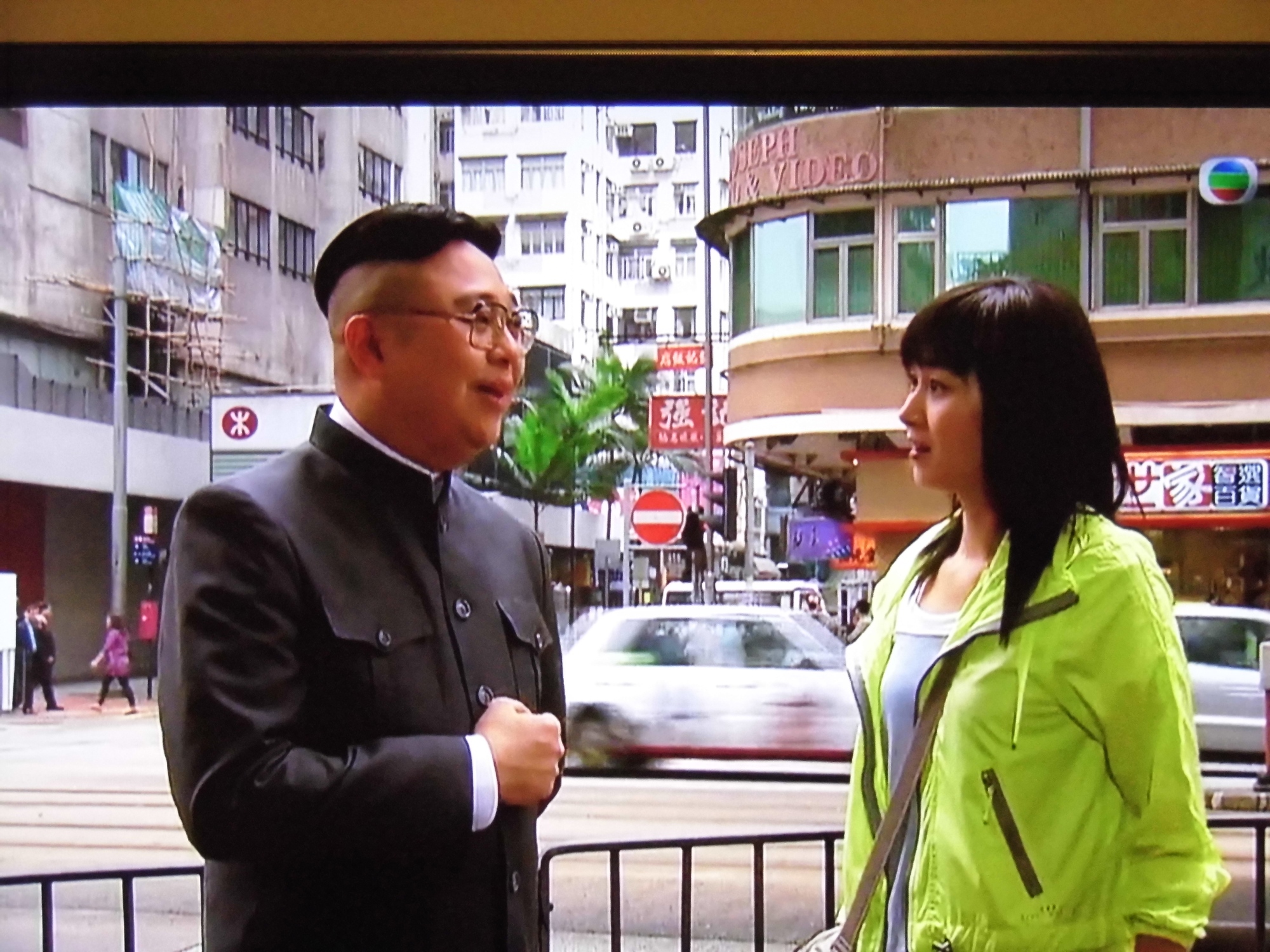 I’ve had enough of this.

PTV – Stocks and shares news delivered by three small people behind an enormous desk. They are all wearing polo shirts.

Preal – dubbed 30 Rock. Tina fey and Tracey Morgan appear to have been dubbed by the same actor. Disturbing.

Some character I can’t render on my keyboard World – Right, this was too fucking weird and I didn’t get my camera up in time so you’ll just have to trust me.  It was Miss Asia 2014, and it really was; there was a huge crowd, a slimy looking MC and many beautiful young women in frocks and sashes all smiling like they’d had the corners of their mouths stapled to their impressively high cheek-bones.  So far, so ordinary; depressing perhaps, but ordinary. But it kept cutting to a VT which was a horror movie where the beautiful young women would look in a mirror and watch their faces age and crumble like the Queen in Snow White.  Close up on their young, beautiful faces screaming in terror. Then it would cut back to the same young woman midway through telling us in languages that I don’t speak about her love of animals and old people and world peace and that.
It was genuinely a bit freaky. I can’t begin to imagine what it was, but then it went to an ad break and then, bewilderingly, to an episode of Criminal Minds.  It was a bit like being in Ringu.
I’m done here. That last unexpected horror show has finished me off. I’ve only managed one page of my EPG, I suspect the real cray-cray is yet to come. I might have another crack at it another time, but for now I’m out of Yanjing and I’m going to bed.  Peace out, y’all.

*one counts as a lot, indeed it is the maximum number of Caulorlimes.