Part of an occasional series in which Spank The Monkey travels to foreign countries, watches films in unfamiliar languages, and then complains about not understanding them. This episode: a compilation of old outtake reviews that didn’t make it into this year’s published articles, spiced up with some gratuitous swearing to justify the title. Hey, it works for Mock The Week. 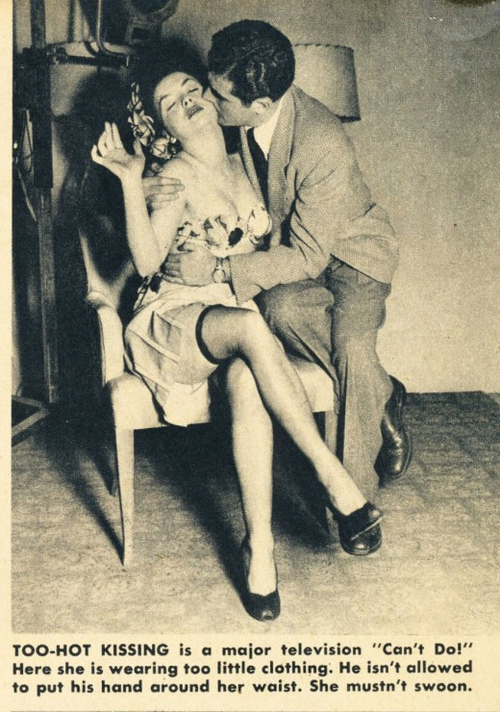 Can I hit you with a childhood memory here? Don’t worry, I’m not going to go all Lena Dunham on you. I’m six or seven years old, visiting relatives in Ireland, and passing the time by attempting to read a local magazine. It has a comics page that catches my eye, but there’s a problem: it’s in Gaelic. One of my uncles sees me looking baffled, and asks “do you want me to read that for you?” I pass the mag to him, and he starts telling me the story. It takes me a good couple of minutes to realise that he’s not actually translating the Gaelic at all: he’s looking at the pictures, picking out the odd word that looks like English, and completely fucking winging it.

If you like, you can think of that as being my personal equivalent of River Phoenix being given the hat in Indiana Jones And The Last Crusade. But there’s an important point to be made here: Uncle Benny was showing me just how easy it is to follow a visual narrative in a foreign language, as long as the story behaves in the standard way you expect stories to go. So what happens when you encounter a narrative about a protagonist who refuses to act in the manner expected of him? The answer is, you end up as confused as I was by the Finnish drama Aikuisten Poika. 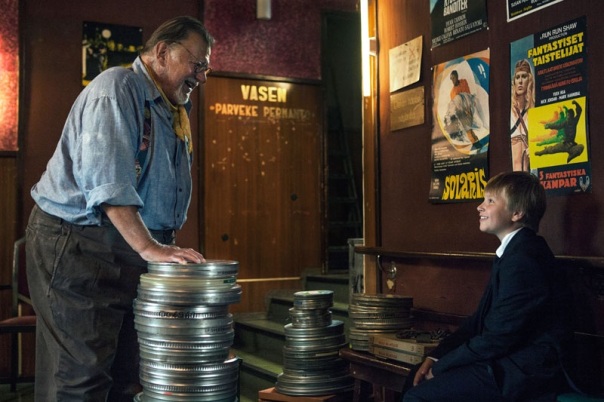 The ‘upside-down boy’ of the title is 11-year-old Oliver (Esa Nikkilä), whose parents are killed in a car crash in the opening shot of the film. When he’s told about the tragedy at school, he’s completely uncertain of how he should react. While his extended family tries to persuade him to grieve normally, he’s off doing other things instead. Part of the time, he’s helping a gay couple to re-open the local cinema, and watching as their programme of 70s Danish softcore gradually builds up an audience of hipsters watching it ironically. But most of his time is spent with Joonas (Kari Hietalahti), a middle-aged man sleeping rough next door to the cinema. Joonas is some sort of security consultant, trying to rekindle his relationship with a girlfriend that’s dumped him for a high-flier who knows Nelson Mandela and Sting.

Some of this is familiar stuff – the friendship between Oliver and Joonas is devoid of any creepy overtones, and they end up helping each other with their respective emotional problems in a very traditional way. But the whole point of Oliver as a character is that he’s trying as hard as he can not to behave traditionally. As a result, the usual cues of human behaviour that help you work out where the plot’s going (or has gone) simply aren’t available to you here. There are a couple of subplots that defy any sort of explanation in purely visual terms, involving Oliver’s obsession with the portraits printed in the local paper on people’s birthdays, and a motion capture suit owned by Joonas’ ex which gets used in an unexpected way. So although the key beats of the story are comprehensible, there’s not enough detail to help you understand what eventually turns Oliver around to a more conventional acceptance of his bereavement – it feels like the film just stops, rather than resolves itself.

If you work in journalism long enough, eventually you make enemies. And if you’re prepared to call this shit I’m doing here journalism, then the main enemy I’ve made over sixteen episodes of Monoglot Movie Club has been the Finnkino Kinopalatsi cinema in Helsinki. On three separate occasions now, they’ve managed to confuse me utterly regarding the language options of films they’ve shown. I’ve previously mentioned Pystyssä, the first film to almost disqualify itself from MMC by including unexpected English subtitles. A few months after that, I saw 3096 Days, a grim German drama about the Natascha Kampusch abduction. It was made even grimmer by the bizarre decision to shoot the whole thing in English, and direct it so atrociously that native speakers like Antonia Campbell-Hughes were as painful to listen to as the German cast.

Most recently, there was Clownwise. I saw the poster, clocked the name of Kati Outinen – an actress whose hysterically glum face regularly turns up in the movies of Aki Kaurismäki – and assumed that I was finally going to see a properly Finnish film at the Finnkino. Wrong: it turns out to be a Czech film, featuring some dialogue in French, subtitles in Finnish and Swedish, and credits in English. That Finnish actress who’s on the posters? She plays a near-mute character whose few lines are dubbed. 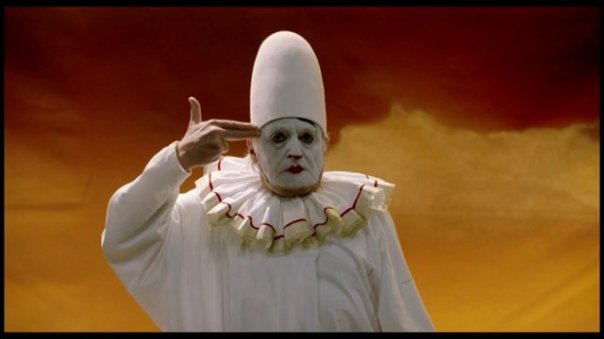 The film tells the story of the three members of an old team of clowns, a good couple of their decades after their heyday. Oskar (Didier Flamand) is leading a touring troupe with his French fancy woman, and gets angry whenever anyone brings up the subject of his former colleagues. Viktor (Jirí Lábus) is dividing his time between teaching circus skills to youngsters, and caring for his demented wife Sylvie (the aforementioned Kati Outinen). The one with the most settled personal life appears to be Max (Oldrich Kaiser), but cancer could soon put a stop to that. A young reporter interviews them all for research, and finds that the divisions between the three are so deep that a reunion seems almost impossible. But you never know. (Actually, you probably do.)

The fatal flaw of Clownwise is that it’s built on the ludicrous assumption that clowns are funny. Far too much of it consists of extended sequences of whimsy masquerading as humour, the most notable being five tedious minutes of the patients of a chemotherapy ward passing a comb to each other and laughing as they do so. There’s no real sense of fun at any point, which emphasises the soapy trappings of the story even more. The closest thing to a natural clown in the entire cast turns out to be Outinen, whose experience with Kaurismäki has made her a world-class underplayer, happy to be quietly doing hysterical things in the background of a shot.

Even if you put aside the multi-national nature of its financing and production, Clownwise feels a little too much like a forced attempt at being all things to all viewers. Of the three films I’m reviewing here, it’s the one most likely to get seen outside of its home country – in fact, since I watched it in Helsinki it’s already turned up in London as part of the Raindance festival.

But everything about it smacks of just trying a little too hard, from the emotional incontinence of its narrative to the excessive tricksiness of its direction – all 360 degree pans, tracking shots going through windows, and non-naturalistic changes in lighting. There’s too much of that going on for the story to engage you at any emotional level.

I’ve said already that Monoglot Movie Club films work best when their story fits into a predictable genre framework. The story of Kesäkaverit is as follows: some girls go off to the seaside, and after that summer, things will never the same again. Is that predictable enough for you?

Kesäkaverit – they’re selling it to international markets under the title Summertime, although Summer Friends appears to be a more literal translation – is the story of a trio of young women who all have one too many vowels in their names. We initially meet two of them as they travel to the resort town of Hanko for a summer job in a café. Karoliina (Iina Kuustonen) is an outgoing redhead, while Iiris (Anna Paavilainen) is a more down-to-earth brunette. What they need is a really shy blonde to make up the full set, and they soon encounter one in fellow waitress Eeva (Minka Kuustonen). They quickly become friends and all move in together, spending the summer dealing with miscellaneous boy troubles, either involving a lack of commitment or the polar opposite. 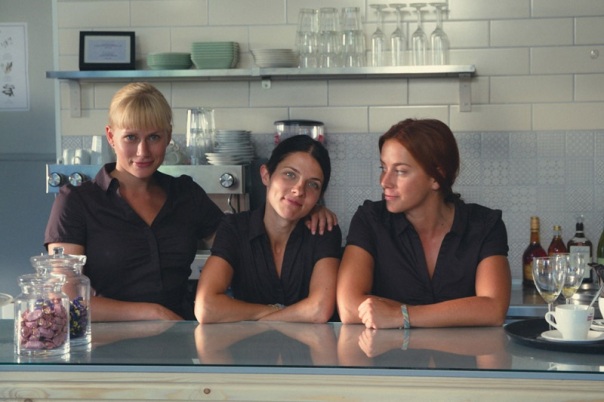 As a basic setup for a non-Finnish speaker watching a Finnish language film, this seems absolutely perfect. Which makes it all the more irritating that the story keeps swinging away from that setup, as other people keep unexpectedly barging into the house and messing up the carefully established group dynamic. One of them is Iiris’ sister who turns up with her whole family, providing a visual comedy highlight as she discusses her recent birth with a series of horrifying hand gestures. Then there’s Eeva’s mum, the owner of the villa where the three girls are staying, who calls round to see how things are going at exactly the worst possible time.

In a film where I understood the language, I’d be welcoming these deviations from the expected narrative path: here, I found myself getting annoyed at them and wanting to get back to the three women at the centre of the story. Looking at that in a more positive light, it’s a testament to how great the chemistry is between the three leads. On paper they could be seen as a colour-coded collection of basic personality types, but they’re so much more than that. The things that happen to them are the stuff of any rite-of-passage holiday movie – betrayal, unexpected pairing-off, looking nervously at pregnancy test kits. But you actually believe in these three girls, and want to see them all get what they’re looking for.

Rather like Aikuisten Poika, though, the language barrier stops you from picking up on the nuances of the relationship dilemmas, and the film seems to just finish rather than provide you with a satisfying end to anyone’s story. It’s delightfully watchable, but it could be cynically viewed as little more than a life support system for its abruptly faded in and out soundtrack of classic Finnish pop, including the splendid PMMP tune that gives the film its title. So in the absence of a proper ending to this loose collection of reviews, let’s finish with a song. Start dancing, you left-footed cu[that’s enough hotness – Ed]

Aikuisten Poika and Clownwise are now available on DVD in Finland and the Czech Republic respectively. Kesäkaverit is on sale in Finland from November 28th.