In some places they mark they start of advent by turning on the Christmas Lights. At MostlyFilm we prefer to blow things up. Here are some of our most incendiary writers on their favourite movie explosions. 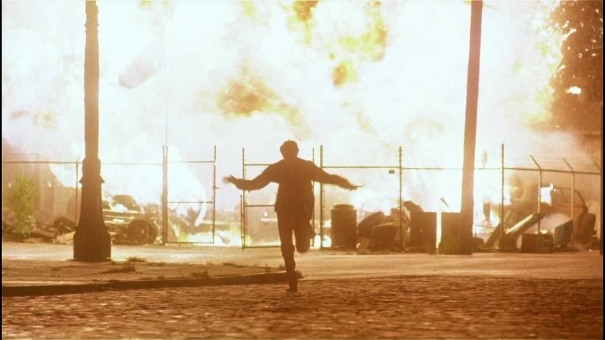 I can’t recall being particularly conscious of how a film was directed before I saw Goodfellas. Something about the distinct way this movie utilised voiceover, camerawork, music and editing made me curious about who exactly was behind those kinds of decisions – some guy called Scorsese, it turned out – and this curiosity led me to more work by the same director and pretty much kick-started my cinephilia. One aspect of the filmmaking that stood out for me was the way he and his longtime collaborator Thelma Schoonmaker used freeze-frames, with an instance near the start of the film in particular marking a key point in the narrative.

Goodfellas begins with a young Henry Hill observing the gangsters in his neighbourhood with respect and envy, wishing that he could one day experience a lifestyle that, to his awestruck eyes, is “better than being President of the United States.” He gradually works his way into their favour by running errands and partaking in acts of vandalism, including torching some cars in a used car lot. As he pours gasoline into the vehicles and lights a match, we hear his voiceover detailing the many benefits of being part of this crew, and the shot freezes on him as he flees the scene of the crime, silhouetted against the flames. Over this still image, Henry tells us, “One day some of the kids from the neighbourhood carried my mother’s groceries all the way home. You know why? It was out of respect.”

Scorsese and Nicholas Pileggi’s screenplay for Goodfellas states that this image of Henry surrounded of fire is “like a man in hell” but it is also a rhapsodic moment for the wannabe wiseguy, and it’s surely no coincidence that the camera catches him with arms outstretched in a Christ-like pose at this point of ascension. The very next scene in the film has Henry arriving home in a sharp new suit, only for his shocked mother to cry “My God! You look like a gangster.” Henry beams with pride; as far back as he can remember, that’s all he’s ever wanted… 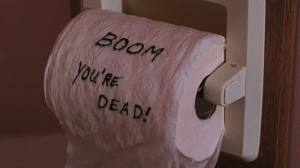 It was always going to come up eventually. I am the homophonic (although not cognominal) namesake of the highly prolific actor Danny Glover, the man who gave us complex loathing in The Color Purple, quiet devotion in The Royal Tenembaums, and the detonation of a bomb hidden in a toilet in Lethal Weapon 2. Glover is a performer capable of lending an impossible gravitas to a scene in which he is trapped on a toilet with a dead man’s switch-operated bomb. Gibson may have the quips (“It’s your ass, Cochise,” “Guys like you don’t die on toilets. Anyway, I’m here and I have no plans on going right now.”) but Glover has the steely terror of a man sitting for hours on a throne of his own fate, caught with his trousers down, squeezing tension out of a scene which has neither a countdown nor the element of surprise, but still promises a satisfying explosive relief. You can tell there’s a terror deep in his bowels that he’s dying to let out, but with his loyal partner by his side he just has to hold it in. The explosion itself causes less of a stink than you might imagine – who would have thought a toilet, propelled by a bomb blast out a first-floor window, could land on a station wagon without so much as a crack in the porcelain? – but it’s the moments leading up to the detonation, the shots of hand-clenching brotherhood that make us grateful the boys came back for number two. If that’s my legacy, then I think it’s a fine one to have. At least my parents didn’t call me Melanie Gibson.

Attack of the Clones
Ricky Young

In the 415-minute clusterfuck that are the Star Wars prequels, it’s hard to pull even a few cool moments from the wreckage. Yes, Darth Maul’s double-ended lightsaber reveal is a bit cool. Yes, Ian McDiarmid’s turn as the Emperor is a cackling delight. Yes, even…okay, that’s as far as we can go down that route; the list of disastrous choices and baffling plot-mechanics is as long as Jabba the Hutt’s tail. Or dick. Dick or tail. You can choose.

But one thing about the series has always been beyond reproach – Ben Burtt’s superb sound design, whose real-world-derived noise-palette keeps the Star Wars universe grounded and crunchy, despite it being filled with prissy tin waiters, po-faced space-wizards and having your best mate be a big stinky carpet.

So if we’re talking about explosions, let’s give it up for the seismic charges in Attack Of The Clones. If you’ll remember, at one point bounty-hunter Jango Fett (soon to regret spending so much on his extensive hat-collection) is chasing Obi-Wan Kenobi through space for a reason that didn’t make sense then and need not detain us now. His rapid-fire lasering is getting him nowhere, so he decides to let fly with a different type of weapon – a bomb that can shatter asteroids. In one of the series’ few nods to possibly-authentic space-physics (until it isn’t), the explosion (or implosion, we’re not that picky), while huge, is utterly silent, until a second or two later it lets rip with an epic burst of cinema-filling sound. In interviews, Burtt revealed that he captured the precise note of honking release by cramming six world-class orchestras into an rhino’s arsehole and then flying a 747 filled with bombs up the poor animal’s meat-chute. Sadly, the rhino didn’t survive the recording, but the look on his face as it all goes off is priceless – you should track it down, really, you’ll be laughing for days.

But then the film goes back to being unwatchable shit right after, so that link there is all you need. Happily, they’ve kept Burtt on for the upcoming Abrams sequels, so while what you see might be lens-flare-filled, missing-the-point lowest-common-denominator bank-making, what you hear will probably still be really, really great.

Things go boom a lot in Hollywood. Casually flick a cigarette butt in a petrol station and you’ll find yourself on the receiving end of an explosion that would put Little Boy to shame. Shoot a gas canister? That’s going to level a house. Drop an aerosol from high enough and you’ll probably find it was a hand grenade in disguise. Yup, the movies sure do love their splosions, and sometimes they take that just too far. Things that should not – could not – explode, somehow go off in their hands.

Take, for instance, Justin Long’s PC in Die Hard 4.0 (the point-oh makes it computers). Sure, there’s a block of C4 in there, but what sets it off? A virus. Or a Trojan. Or a, a, goddamn rerouting of the encryption codes through an offshore server node whatever bullshit they want to come up with. There’s no physical switch and it’s hard to see exactly how Timothy Olyphant’s 1337 haXX0rs could have remotely triggered it using malware that, in 2007, would have struggled to get Long’s Gmail password. The only real explanation is that the presence of Bruce Willis, looking like a chunk of malevolent driftwood, causes spontaneous explosions, everywhere.

At least there was some attempt at an explanation in Die Hard 4.0. Van Helsing’s mysterious exploding coach has no time for such trifles. During a moonlit (it’s always full moon in Van Helsing) chase through the Transylvanian forest, a horse-drawn carriage does its best impression of Santa’s sleigh, nimbly leaping a broken bridge – but uh oh, it doesn’t quite make it. The horses are fine, but the carriage drops into the gorge below!

The flying vampire lady (I dunno) has a peek in, eager to claim the occupants but what’s this? The carriage is empty and before she has time to fly away it crashes to the floor below and… explodes? Eh? IT IS MADE OF WOOD AND DOES NOT CONTAIN BRUCE WILLIS. So what’s the secret? Well, back up a little and you’ll see a very, very…. very…….. very quick shot of a pile of stakes and what we can only assume is dynamite lying on the floor directly beneath the coach. So there you have it. Despite this bridge-out being a surprise to him, Van Helsing did place a pile of explosives and stakes on the off-chance that this exact sequence of events would occur. The only true explanation is that sometimes, things just have to explode because otherwise you’d have to examine the plot. And in the case of both Die Hard 4.0 and Van Helsing, that is something to be avoided at all costs.

The Other Guys
the Tramp

Explosions in movies can be surprising (the twist you didn’t expect), they can be cool (look for the slow-mo), they can frame the protagonist (walking away with flames licking behind the hero), they can be disastrous (that’s the rescue plane plan scuppered then) and they can be tragic (too many dead); rarely are they funny.

The Other Guys made explosions funny. It didn’t take much – simply pointing out that if you really did walk towards or away from an explosion the reality is that you would end up flat on your arse, deaf and probably badly hurt. It’s a truism we all know, but we suspend disbelief anyway because, well because explosions look good on camera. Well, they do with the right director, cinematographer and set-up. After all, if you were to spend a significant chunk of your budget on a set piece like that you’d make sure it looked good and had impact too.

In The Other Guys a surprise explosion of a low-rent (we’re not talking glass high rise here, think shopping mall) accountancy office lands our heroes, Mark Wahlberg and Will Ferrell, on their backs, quite deaf, sore and 100% disillusioned with movie explosions. Within the context of the rest of the film it is a stand-out moment. On its own… well watch it; I’d say it was still pretty funny.

I’ve come to the Mini show room with my kids for a test drive and they’re showing one of the Transformers movies in the waiting area. After about twenty minutes (it could be seventy minutes or four minutes, I haven’t been timing it) my seven year old says: “Seriously is that all that happens? Things just blow up? That is not a good film.”

And this is my position. What thing about explosions are you supposed to enjoy? They’re loud and dangerous. When they’re happening, no one is making me laugh or falling in love. Even as a kid I couldn’t bear to see other people’s property being damaged; I was the biggest Pink Panther fan but had to watch through my fingers when Clouseau and Cato trashed their beautiful Paris apartment. In Revenge of the Pink Panther they finish it off with a bomb. Explosions are the worst, you can’t even tidy up after them.

I hate the slow motion running towards us with windmilling arms. I hate the moment where a Bond movie loses its mind and an exquisite utopia is wiped out for the arrest of just one person (already known to the authorities). I hated the endless times my brother would point out that it would never do that because blah blah fuel tank something something I wasn’t listening then so I can’t remember now.

There’s one explosion I like and my memory of it has been jogged by our location. This explosion is intentional, highly controlled and safety-conscious. The damage is budgeted for and causes upset to virtually no one. It’s the only explosion everyone looks forward to.