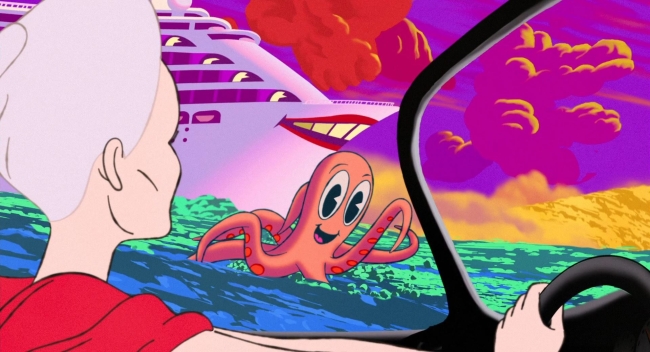 The real world hurts in The Congress – the first thing we see is a close-up of Robin Wright weeping. But cartoons can help us leave the real world behind. Back when he was a film reviewer, Graham Greene wrote about how, while poetry and prose could capture sadness and despair, Disney films were better than everything else at capturing weightless, innocent joy. I’m quoting Greene from memory but that word ‘weightless’ stuck in my mind. It evokes a sense of transcending your day-to-day cares and of limitless potential. This is suggestive of the way animation, right from the earliest days of cinema, has been a defining part of that promise the pictures make to us; that if we buy a ticket, we can go anywhere, see anything.

Maybe that’s why, when live-action and animation are mixed, the transition to animation often marks the point where characters move into a more fantastical realm, where the rules that govern our reality no longer apply. That happens in Mary Poppins, The Water Babies, and the video for ‘Take On Me’.

It happens in The Congress too. We are in a dystopian future, so that shift away from reality is framed as a sinister combination of the self-shaping projections of an online existence and the blissful, narcotic escape of drugs. But we’re about 45 minutes into the film before we see a single frame of animation, so it’s a long time before anyone gets high. Often I found myself longing for some extra stimulation.

The film starts with someone getting a row. Robin Wright plays a version of herself and the reason she is crying is because Harvey Keitel, who plays her agent, is berating her for making lousy choices. Shortly after this they go to Miramount Studios (that name is the first of only two jokes in the film) and meet with a sleazy producer, played by Danny Huston, who also berates her for her lousy choices. This is brave scriptwriting because if you hear about Robin Wright’s lousy choices often enough, you can’t help but wonder about her decision to appear in The Congress.

Actually, Wright is very good; she’s a vivid beacon of pain and loss in both her real and animated forms. Huston and Keitel fair less well, the affected deadpan register of the script often sounds flat when they are talking. Ari Folman, who directed the film as well as writing the script, has a habit of giving his characters monologues that descended into repetitive litanies. Characters talk at one another and the words just fall out, there’s little of the crackle and danger of an encounter where something is at stake.

So the parts of the film that do pack some oomph stand out. Wright agrees to be digitally scanned by Miramount, the idea is they’ll own her image, be able to put her in any film they like, while she lives a life of ease and plenty and never has to work again. Wright is scanned in a vast chamber of cameras and the conceit of the scene is that, in order for the scanning to be complete, she needs to be photographed feeling everything: joy, emptiness, sadness, anger, pain. She struggles with this. And so Keitel tells her a story of his Bronx childhood, about a boy he grew up who was born with a two-inch tail. Well, of course he does. But as the story goes on, it takes on a kind of weird power and suggests that the relationship between agent and actress is based on a potent mix of love and exploitation. If he struggles elsewhere, Keitel at least makes this bit fly; it’s as if he is exposing himself, to hurt Wright, in order to help her. All the while the cameras that surround Wright flash uncaringly.

This vivid scene acts as a kind of centre-piece in the film. After it a title card tells us twenty years have passed and Wright is driving to the Congress of the title. This is where she has a toot and becomes her cartoon self. Miramount want her to act as some kind of spokesman for their ‘world of chemical fantasy’ where everyone is able to be who they fantasise about being. This is what movies have degenerated into. But Wright rebels, calls bullshit on the future and romances a cartoon animator with the face of Adrien Brody (voiced by John Hamm). At the same time some kind of actual armed rebellion appears to be taking place, there is an assassination attempt, and Wright chats to Tom Cruise, who is depicted in pleasingly mean caricature (this is the film’s second joke).

I think most of this, apart from Tom Cruise, is taken from The Futurological Congress,  the Stanislaw Lem story the film is based on. But if I sound confused, it’s because I was. That said, the film has a frantic quality to it in these scenes that makes for a welcome change of pace. Folman fills the screen with a spectacular range of characters and a mix of animation styles, as if the melancholy elegance of Miyazaki lived alongside the bawdy boldness of early Bakshi. The whole thing put me in touch of my memories of being overwhelmed and disturbed by the scarier early-Disney short-films, populated by jelly-legged monster cows and jitterbugging skeletons.

Still, Wright wants to get out of there and you can see why. Folman clearly doesn’t want to make this part of his future look too attractive. But by making it seem like a busy, boring, bad party, where all you get to be is well-dressed, Folman fails to evoke a sense of why anyone would want to escape into this fantasy world. It’s as if Scorcese had made being a gangster look boring in Goodfellas. So when, an hour and half into the film, Wright decides to look for her son, Aaron, and Hamm tells her that this will mean ‘going on a long journey’ my heart sank.

And yet that journey ends in a kind of coda that is moving. Wright has left the Congress behind, come back to the real world and still not found Aaron. She meets up with his doctor (Paul Giamatti, sporting a spectacularly unconvincing fake beard at this point) who tells her son has ‘crossed over’ into the fantasy world she just left. She takes the drug again and finds herself… inside her son’s memories? Inside her idea of her son’s memories? That’s ambiguous. But we see a sequence of animation that takes us from the womb, through his childhood memories and his weightless, innocent joy as he flies a kite. We see moments we remember from earlier in the film. We see it all from Aaron’s point of view, as he grows old, loses people, grows weak. In less than two minutes, this sequence made me think of Solaris, 8 ½, and Synecdoche, New York. There is no dialogue but we don’t need to hear anyone speak. It’s the best bit of the film.

The Congress is out on DVD and Blu-ray on Monday