As promised yesterday, smut peddler, Etta Stark is back with her post-match analysis of Fifty Shades of Grey. Did it defy all expectations and turn out to be surprisingly good in the end? No. No, it didn’t.

As I mentioned in my pre-review post about Fifty Shades of Grey yesterday, I booked a ticket to see the first available screening at my local cinema. And thank goodness I booked in advance. What with me and those other four people in there the place was close to 5% capacity, I reckon. If twenty times as many people had decided to go at the last minute I might have had trouble getting a seat.

Fifty Shades of Grey: The Motion Picture stays pretty close to the original book. This is great news for fans of Fifty Shades of Grey.  Not such great news of fans of cinema generally. I’m not saying it should be necessary to make dramatic changes when adapting a book for the screen (although personally I would have moved all the action to pre-Renaissance Italy and made Christian Grey a killer space-Cyborg) but in Fifty Shades’ case, its slavish adherence to the original text isn’t really doing it any favours.

Dakota Johnson plays Anastasia Steele, a meekly awkward college senior who, for some reason, proves irresistible to multi-millionaire businessman, Christian Grey (Jamie Dornan).  They embark on a love affair which, because Christian is an extraordinarily kinky bastard, comes complete with a fully equipped sex dungeon and a mound of non disclosure agreements and signed consent forms. Because paperwork is sexy!

Fifty Shades of Grey is not by any measure a good film. It’s barely an adequate film. In fact it’s the sort of film that makes me think “How hard can being a director actually be?” I only have a shaky grasp of what directors do, but I’m pretty sure I could have directed Fifty Shades of Grey. There can’t be much to it. Hand out scripts, make sure actors say the right lines with more or less corresponding facial expressions, check that cameramen are pointing cameras in the right direction, say “Cut!” when someone falls over some furniture. All Sam Taylor-Johnson had to do was occasionally shout “Dakota! Try to look a bit more winsome, that’s it. Dornan! Frown a bit! No better frowning than that! What? That’s the best frowning you can manage? Fine, frown like that then. It’ll have to do.” 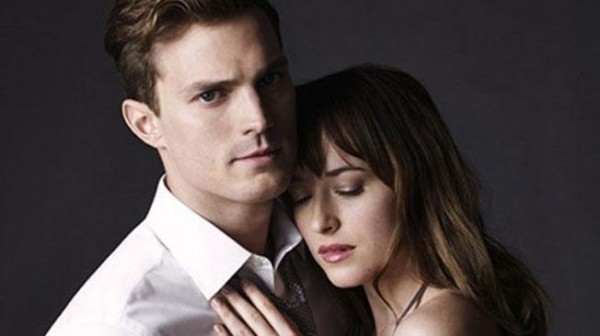 And happily for Taylor-Johnson, if anyone does want to criticise her film for deficiencies in plot and dialogue, or generally existing in the first place, these are all faults of the original book. If you hated the book and went to see the film anyway, then what were you expecting? Obviously, you’re either an idiot or a masochist. Although to be fair masochists are pretty much its target market.

It takes a while to get going (again something that is true of the original book) but once the protagonists, Anastasia and Christian do start sleeping together, the film recognises its true purpose is to provide the super-softest of softcore pornography rather than any kind of convincing drama and just gets on with it. I think we lost a blow job or two, and they ditched a sex scene in a Georgia hotel room altogether which meant we lost a pre-sex tampon removal scene (much to the consternation of fans who clearly feel like a bit of tampon removal adds some gritty realism to the story) but there’s still a fair amount of (discreetly shot) sex and spanking to be had.

God, it’s boring though. There really isn’t any kind of plot to speak of. It’s just two people making some extraordinarily heavy weather about starting a relationship. Just chill the fuck out, you two. It’ll be fine.

Christian and Ana don’t laugh much at all. Favouring as they do intensely staring at one another and looking unnecessarily pained. Still, it all works out for them in the end. Oh no, wait, it doesn’t. Ha. As with the rest of the film’s shortcomings, anyone upset by the blatant “To be Continued…” ending of the film will have to take it up with E L James rather than Sam Taylor Johnson. Will things work out for these two crazy kids? You’ll need to watch the sequels to find out! Or don’t bother because let’s face it, like this first instalment, they’re going to be full of clunky dialogue, terrible plotting and levels of acting that never really aspire past “Yeah, that’ll do”. Best give it a miss, to be honest. You’re probably not that much of a masochist.