Spank The Monkey reviews John Wick: the film that takes the Sad Keanu meme, throws it to the ground and shoots it in the face. 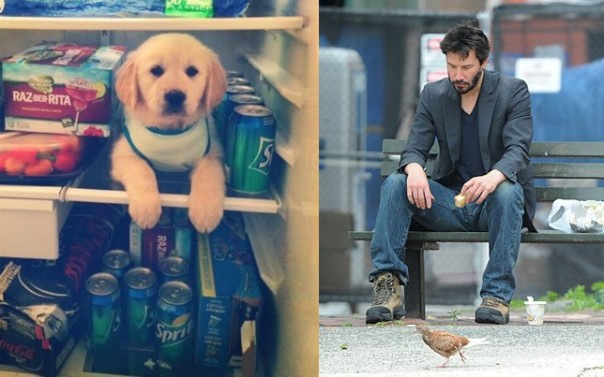 A few dozen billion bits: that’s all a movie is nowadays. Over the last decade, film distribution has been digitalized and virtualized to the extent that we expect US and UK release dates to be pretty close to each other, if not identical. Which means that when that doesn’t happen, people notice. In this country, most of the internet chatter so far about John Wick has been centred on how almost six months have elapsed between its release in America and its theatrical debut over here. It’s become an unexpected throwback to a simpler time, as people have boasted about importing the DVD, or catching it while abroad, or – in my case – seeing it as an inflight movie. (And those are just the legal methods.) Now that it’s actually about to appear in cinemas, we can see that it’s a throwback in a number of other ways too.

John Wick‘s a high-concept action flick: so high, in fact, that you could sell it to a viewer in one single log line. Let’s not do that, and instead approach that line gradually, because one of the key pleasures of the movie is its love of the slow reveal. We open on what looks like the end of the story – a battered and bloody Wick (Keanu Reeves) crawling out of a just-crashed car – and jump back almost immediately to happier times. Well, relatively happier. Because Wick is a man tormented by the sudden, unexplained death of his wife. In her final hours, she arranged for Wick to have some sort of substitute for her – a puppy, which is delivered to him shortly after her funeral. His life from that point on has a rudimentary structure, but at least it has one: driving around in his classic Mustang with the dog for company.

And then, by chance, Wick encounters a couple of Russians who take an interest in his car. He politely turns them down: they break into his house at night, beat the crap out of him, and steal it. There’s collateral damage along the way. Unfortunately for Wick, he didn’t realise what type of Russians he was dealing with. Even more unfortunately for the Russians, they’re unaware of who Wick is, and what he used to do for a living before he got married.

Here, therefore, is John Wick‘s plot in one line: Keanu Reeves hunts down and executes every Russian mobster operating in New York, because they killed his dog.

The action sequences in Wick have a curiously old-fashioned feel to them. Once you discover that its directors – Chad Stahelski, with the uncredited assistance of producer David Leitch – are both established stunt co-ordinators, it all makes perfect sense. You suspect that like me, they spent far too much time in the late eighties poring over the action films that were coming out of Hong Kong: noting how John Woo had realised that the key person who arranges violence on screen is called a choreographer, and took that analogy as far as it could possibly go. Woo understood the value of actually staging the action on screen and using the camera to capture it as clearly as possible, a skill that’s been lost these days with non-linear editing, artificial camera shake and CGI. There’s a feeling throughout John Wick that Stahelski and Leitch want to make that skill fashionable again, because they know full well that audiences can tell the difference.

The premise that these action scenes are built around may be ridiculous, but thankfully the film doesn’t nudge you in the ribs constantly to see if you’ve got the joke. At the same time, there’s an unexpected degree of sophistication in the storytelling. Mostly, it comes from Derek Kolstad’s script taking its own sweet time when it comes to revealing information, and in some cases not giving it to you at all. This is particularly the case when Wick abandons his house and holes up at The Continental, a hotel with a particular class of guest, a very specific set of rules, and a ridiculous number of familiar telly faces wandering its corridors. In short order, Wick meets up with Al Swearingen, Mockingbird from SHIELD, and an unspecified number of Baltimore PD’s finest. Meanwhile, Theon Greyjoy and Dennis Duffy are outside waiting to finish him off. (The slash fiction that could come out of this film is potentially astonishing.)

This leads to the other thing that Stahelski and Leitch have drawn from Hong Kong action cinema: the way in which the action is used to define character. You could argue, for example, that Keanu’s signature move is heavily inspired by the gun-fu sequences in Equilibrium, with barely two minutes going by before he’s thrown yet another Russian goon to the ground and shot him in the face. But here’s the important thing – it’s only his signature move, with every character bringing their own approach to the combat scenes. If you wanted to take the lazy approach of comparing the film to a video game, it’d be something like Tekken, where everyone has their own fighting style, meaning every confrontation plays out differently.

The splendidly cameo-stuffed array of supporting actors – plus the still-got-it cool of Keanu Reeves in the lead – ensures that John Wick is much more than a delivery system for a series of bloody-hell-did-you-see-that moments. But when those moments come, they’re worth the price of admission. And much as it may seem that this is a film that would be best seen in an environment where you can keep one finger on the rewind button, it seems to me that it’s one that should really be caught on the big screen. It may be little more than a B-movie with an A-list cast – but it’s a B-movie whose level of craft restores some dignity to a class of cinema that’s been recently devalued by studios like The Asylum. Do you really want to watch someone from a daytime soap you’ve never heard of, being attacked by a poorly-rendered digital composite of a dangerous animal and a natural disaster? Or would you rather watch Keanu Reeves hit a guy with a car at high speed, and then shoot him several times as he rolls over the roof? Deep down, I think you know the answer to that one.