Blake Backlash on the coldest date movie of 2015.

Force Majeure begins with a family photograph. Dad, Mum and two children pose  – and are posed by the photographer – on top a of a mountain. So a negotiation takes place between how they would like to see themselves and how they want others to see them. The parents, Thomas and Ebba, smile and chuckle knowingly as they’re put in cheesy poses. They’re playing along but letting each other know, we get it, we’re better than this. This isn’t us but we can play along because we know what we’re really like. 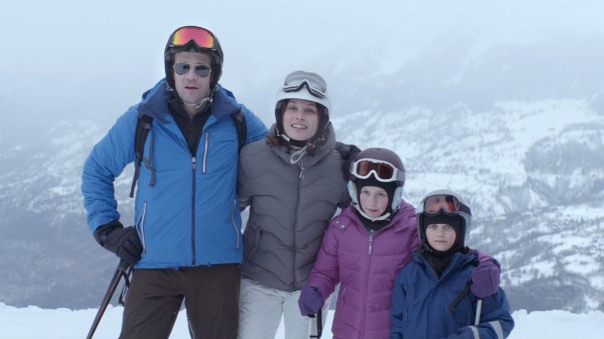 Most relationships – and all marriages – are conspiracies in which the participants agree to make each other feel more impressive than they actually are: make me feel brave and beautiful, I’ll make you feel kind and smart.

Is that too cold? Perhaps. And that may not even be the thesis of Force Majeure – but it does seem to enjoy playfully torturing its audience with our anxieties about how true that might be. How true it might be about us. It’s often very funny with it.

What happens could almost  the basis for a holiday anecdote (indeed Thomas tries to make one out of it): the family are sitting at a restaurant. A controlled avalanche occurs in the mountainside above them. For one horrible moment it looks like it will smash into them. As it turns out they’re safe. Everyone is fine, at least physically. But before the screen is engulfed by an icy spray of snow dust – like mist or static – we  see Thomas run off leaving behind his wife and children. Am I going too easy on him when I write leaving behind? Might abandoning sound more honest to you?

The film wants you to think about those questions, even argue about them. If you’re in a relationship, I’m fairly certain the film – and its director Ruben Östlund – wants you to argue about this stuff with your partner. And that thought leads, irresistibly, to another: is this a film that wants to cause you problems in your relationship? Imagine that!

Now, I couldn’t prove in a court of law, that the film is so mischievous. But if I had to, Exhibit A would be what it does to the two characters it offers-up as audience surrogates. Thomas and Ebba are joined by Fanni (Fanni Metelius) and Mats (Kristofer Hivju – David Cameron will recognise him as Tormund Giantsbane from Game of Thrones). Fanni and Mats have to hear Thomas and Ebba tell their avalanche story, then they leave and laugh at them. But they haven’t got to the lift before they start to argue – and the argument snowballs into one of those ones where he’s flipping on the light at too-far past 3am in the morning, to make one last point, ask that question you know he shouldn’t ask.

So it’s almost like the film is teasing us, saying: see what watching these two people argue does to people? Be careful what you say when the lights come on at the end of the movie! (Although there’s something delicious about this warning, issued when the film knows how fatally addictive ‘I see what you’re saying. But…’ can be.) Of course I could be wrong. Maybe the director and his cast weren’t trying to play with us like that. Maybe their intentions were much more serious. Here’s how they chose to pose at the Cannes film festival: 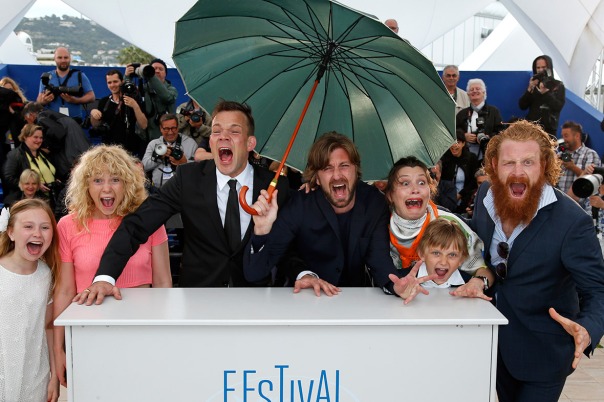 Still, the film does deliver painful frosty glare and icy-burn. Each time Thomas and Ebba have their argument, as is the way with arguments when we can’t stop having them, the words cut a little deeper, more things are said that are that bit harder to laugh off. (Although when I saw it at the Glasgow Film Festival people were still laughing after I thought things had stopped being funny – so if you and your date laugh at different times, there’s another thing you might fall out about after.)  Eventually, someone ends up crying uncontrollably, although even at this moment of apparent vulnerability, you might suspect that the posing has not ceased.

Throughout the film Ostlund slyly evokes the odd geometry of this skiing holiday. The uniform pattern of the hotel interior, the clanking rhythm of ski-lifts. And how this regimented existence hems in all that a time removed from day-to-day life could offer. Not knowing who you are anymore could be liberating as well as unsettling and both Thomas and Ebba flirt with the idea of being a different kind of person. By the end of the film (we get a climax, then a coda) they have decided who they want to be – or who they want to pretend to be.

If you can go on your own I can’t think of any reason you should not go and see this film.

Force Majeure is out today.