Blake Backlash indulges in some colourful excess as he enjoys Blood and Black Lace, which has just been released on Blu-ray. 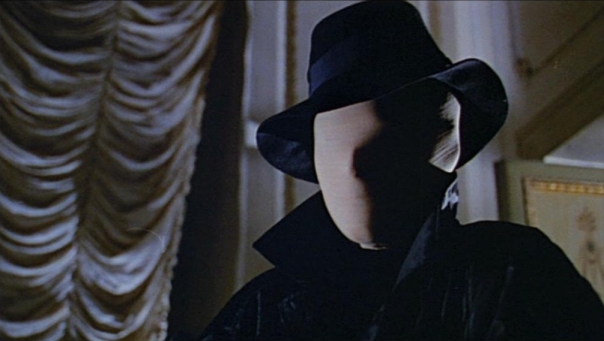 What colours do you need to paint the damned? The (rather lovely) English title of Mario Bava’s 1964 film gives you a clue. Blood and Black Lace, red and black. Red for the inferno, black for the abyss.

I’m not being fanciful when I talk about painting. Bava had trained to be a painter and when he started to work on films he displayed a valuable talent for producing matte paintings – backgrounds painted on glass that could conjure up a vast landscape or beautiful interior. Bava’s knack with them got him work on Italian swords and sandals epics. I’ve never seen it but in the 1954 version of Atilla the Hun, with Anthony Quinn at Atilla, the impressive size of the rival Hun and Roman army camps is provided by one Bava’s paintings.

So Mario learned how to use colour and make the most of the money he had to spend.

Virtues which serve him well in Blood and Black Lace. The film begins with a darkly playful title sequence. The first thing we see is a blur of silver, revealed to be a dress hung on a mannequin – a somewhat garish and unsettling mannequin, with skin of blood red, wearing a dark wig but without eyes or a face. We follow the mannequin’s pointing finger to Cameron Mitchell, who is the first member of the cast we are introduced to. One by one we meet the others, in rigid poses (as if they are about to have their photographs taken or are sitting for a painter). Each of them is the grounds of the Christian Haute Couture fashion house in Rome, and everyone is posed beside another faceless mannequin.

I need to tell you about these mannequins. They’re not just there in the title sequence – we see them throughout the film. There are two types, those blood-red faceless brunettes, and these garishly coloured wire-frame torsos without heads or limbs. They look human but inhuman at the same time – like people who have been robbed off their humanity. The first time I saw the film I thought they functioned as ever present memento mori, suggesting that everyone in the cast is one step away from becoming a body, the red making us think about blood in veins, the wire frames making us think about bone beneath skin. But they seem too otherworldly to be just that, less like something from this world, more like something from the next. And not the nice next world: facelessness, red skin, skeletal figures – all that seems drawn from imagery associated with devils and demons. They stand about  on the edge of Bava’s frame, as if intruding from a nightmare about hell.  So not just memento mori, not simply saying ‘remember you will die’ but ‘remember you will be punished’.

In fact, in that title sequence, the punishment seems to have already begun for some of the cast: 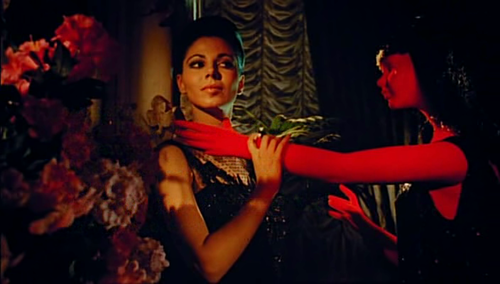 Because this Italy after all, Rome in fact. So we can expect people to have an interest in excess and its consequences. The fashion house may be called Christian Haute Couture – but there’s plenty on unchristian sinning going on. Infidelity, drug-dealing, blackmail, as well as murder. Much of the plot of Blood and Black Lace involves the first victim’s diary, and it is implied that nearly every character has a secret they want to keep that the contents of the diary may expose. As well as the models and designers associated with the fashion house, the cast of potential perpetrators and victims includes a louche antiques dealer and a seedy aristocrat, who sports the sort of facial hair (a think dark moustache) which has signified corruption since the early days of cinema.

Moral corruption rather than political corruption. All of this stuff – the drugs, the sleazy aristos, the beautiful women, the dead bodies, the dogged policeman investigating it all – could easily be the ingredients for one of the real-life scandals that gripped Italy in the 50s and 60s. And I think the film reflects both a fascination with, and unease about, what rich and glamorous people got up to behind closed doors that one can find in how the Italian press covered those scandals. The middle-class wondered about the rich: what drugs they took, what sex they had, what innocents they degraded and what steps they took to cover it all up. But while a director like Francesco Rossi might use murder as way to tell us something about Italian society, Bava doesn’t even throw in a crooked politician, or show us the cop clashing his boss. There is – without being too spoliery – a cover-up and conspiracy of a sort taking place here. But for the most part, the Christian Haute Couture Fashion House seems cut-off from the real world, a place unto itself, like a castle in fairytale (it even contains a secret passage and a hidden dungeon). It is as atmospheric and isolated as the school in Black Narcissus. In fact: the vivid use of colour;  the black in the title; the tense relationships between women; and the Catholicism – Blood and Black Lace could be the ne’er do well sister of the Powell and Pressburger film.

Martin Scorsese, an admirer of both films, has talked about Bava films have no plot, only atmosphere. Which sounds like a slight but since we know what Scorsese is like, we know that is high-praise coming from him. And what atmosphere. You can really see and feel all that properly, maybe for the first time, on restoration used on the Arrow Blu-ray. We need to see Bava like this, because Bava is still painting, always thinking about  light and colour. One of the murders takes place in an antique shop, the scene lit by the sickly green spilling through the windows from a flashing neon sign (promising dancing) just outside. The garish modernity of the light source turns this place of old things into a chamber of looming menace.

And the last time we see blood in the film, we are in bathroom. The victim is laid out in the tub, and blood billows in through the water from the bottom of the frame. It almost looks as if a painter, who is through with red, is cleaning his brushes.

For now, at least.

Blood and Black Lace is available now on Blu-ray and dual-format discs.

2 thoughts on “The Beautiful People You Meet in Hell”